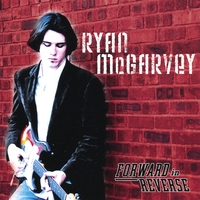 Have you ever discovered a new talent comes along that knocks you flat on your keister, inspiring you to get right back up in hopes that you’ll get knocked right back down again? Guitar prodigy, Ryan McGarvey, is just such a talent. The 23 year old axe slinger from Albuquerque, New Mexico, is one of the best kept secrets in the good ol’ U.S. of A.

What does he sound like? To say that he literally sounds as though he’s channeling Hendrix, Vaughn, Clapton and Page would not be an exaggeration in the least little bit.

His 2008 debut album, Forward In Reverse, is chock full of all original, excellently composed tunes that will make many well established artists turn green with creative envy.

The first cut, Right In All The Wrong Ways, conjures up the illusion of a jam session between Cream, Aerosmith and ZZ Top. The driving blues number will stick in your cranium, creating one of the most enjoyable earworms you’ve ever experienced.

Joyride is a great tune to drive down the a desolate stretch of Interstate 40, say, between Albuquerque and Amarillo at dusk, with the convertible down and the speakers blasting. You’ll never want to stop.

The love song, The One That Got Away, will hook you from the git-go with its hypnotic rhythm and early 70’s aura. It is followed by the Stevie Ray Vaugh-esque, Watch Yourself and Texas Special, that will leave you convinced that Mr. Vaugh had, indeed, raised from the dead.

McGarvey’s unique song craft comes shining through in Someone Like You. This tune, while great in its own right, is unique in that it doesn’t seem to draw heavily from the 70’s influence. However, Second Time Around is a tune dripping heavily of Cream mixed with a little Jeff Beck.

Cryin’ Over You is blues as it should be played: clear, fluid, and raw with emotion. It doesn’t get any better than this. Followed by Mystic Dream is phenomenal. What else can I say? Well, in addition to being an excellently crafted instrumental, I would very good money that I would need to borrow from you to see this played live as a duet with Robin Trower.

Another song that begs to be played as a historic duet is Blue Eyed Angel Blues. Again, McGarvey can stand alone with this tune and still be called great. However, if I could ever watch Ryan perform this tune with Gary Moore, I would feel that I watched double greatness in action.

Oh! I can’t believe that I haven’t already told you this: All this great music and musicianship and it’s just Ryan, August Johnson providing excellent licks on the skins and Sam Miller serving up bass playing that is right up there with the best of them.

If you happen to be fortunate enough to live in the Albuquerqu/Sante Fe area of New Mexico, you’ll be among the blessed few to catch this incredible band of talent live. If you don’t live in that area, then, like me, you’ll just have to settle for listening (repeatedly) to Forward In Reverse and look up the hand full of video clips here on YouTube.

You can also keep up with Ryan and the band www.myspace.com/ryanmcgarvey .

Keep a watchful eye on this guy. He’s going places. 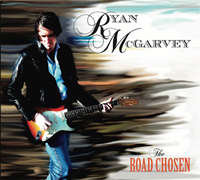