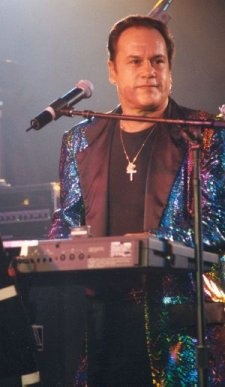 When I was in high school back in the seventies, one of my favorite things to do was go to the school dances.  It wasn’t so that I could dance because I really didn’t dance.  It was to meet up with friends, scope out my latest, weekly crush and to just have fun watching others have fun.

At those dances, everybody would liven up when the more danceable songs were played (for those fortunate souls who could actually dance, that is).  One of the bands that definitely got the kids excitedly onto the dance floor was KC and the Sunshine Band.  There was something about the danceable, carefree sounds from KC that made one want to dance and do so with a smile on your face.  Such were the not-a-care-in-the-world seventies.

I was recently offered the opportunity to chat with Harry “KC” Casey, who is currently on tour in the U.S.  What an honor it was to be able to chat with one of the people who contributed so much to the soundtrack of my youth.  After some small talk and relayed greetings from mutual friend, Rob Parissi, I asked KC what he has been up to lately.

“Lately, I’ve been off for the last couple of weeks. My main thing is that I do between 80 and 100 shows a year. It’s be a little slower since the recession has started because of the corporate side of it, but that’s what I do – what I love doing. Other than that, I just chill out and take care of other business I have to take care of.”

With KC enjoying a successful touring schedule, I wondered how the road is different for him today than it was back in the 70’s. After some thought, he replied, “Well, it’s gotten a lot easier. Because of technology and things like that, it’s just a lot easier to do the shows – to put them up; to put them together. You don’t have to have monitors on the stage any more – you just have the earphones in your ears and the sounds right in there and you don’t have to scream over the band. Every night is pretty consistent.  It’s just a great thing.”

With these kinds of changes in place, I wondered what kind of show that his fans could expect on this tour.

“Well, we have a lot of hits so the shows are mainly of the number one hits that we had. The girls and I change costumes during the show so during those parts, the band does melodies of cover songs from the seventies just to keep the whole show familiar to the audience.

“I used to put obscure singles that we had in the show but I felt, at times, that we were losing the audience by doing that. So I thought, ‘Let’s put some covers in there because I think the audience would relate to that better.’ I know people have come to the show and critiqued it and said how we put all this filler in but its deliberate filler. I want the show to stay familiar to the audience. I hate going to a concert and hearing all this stuff that were not hits. I think it’s damned if I do and damned if I don’t.”

When I suggested that covering the stuff that people know is the lesser of two evils, KC immediately responded by saying, “That’s what I thought and then I read a couple of reviews trying to tear me down. It’s like, ‘c’mon man!’”

When I go to shows these days – especially artists that I admired when I was a kid – I always make sure that I notice what the makeup of the crowd is. Regardless of the act, it always amazes me at the age mix that is in the crowd.  I asked KC what was the demographic mix is of his crowds.

“We’ve always had from babies to grandmas! It still is, depending on the venue we’re playing. If we’re playing where you have to be twenty-one and older, then it’s from twenty-one’s to grandmas. A lot other times it’s a family affair, which is great.”

While still on the subject of audience expectations, I asked KC what will be different from when they saw him and the band in the 70s and what will be the same. He responds after some brief reflection.

Having crafted tunes that have such staying power, I mention to KC that I hear his list of great hits everywhere from satellite and terrestrial radio and as well as many other places. He adds with obvious, well deserved pride, “They’re in movies and TV commercials all the time. I hear my sound everywhere. The new Eminem record with Rihanna - the rhythm is similar to a song I had out called I Get Lifted.  I hear my influence throughout everybody’s records.”

In all of KC’s years of touring, what’s been the most memorable thing that has happened on the road?

Laughing, he say, “Oh boy! I don’t if I can remember anything! It was very chaotic to me. That’s what I really remember about it all – how chaotic it all was and how lonely it was for me. It was very lonely for me.

Probing a little deeper into his answer, I asked in what way and why he felt lonely.

“Lonely? Well, because I had to be locked in all the time. Being on the inside looking out. That’s how I was, constantly. I would have rather been there with everyone and I couldn’t be. It became very isolated and very lonely for me.”

As an interviewer, I know that the people that I’ve been very fortunate to interview have been asked the same questions thousands, if not millions, of times.  With that volume of repetitious questioning, they are expected to answer as if they’ve never been asked those questions before.  With that in mind, I asked KC what would be the one thing that he feels has been least covered and understood about him and his work.

Again, after giving the question some thought, he says, “The least understood?  I know that we created a new sound. We changed the sound of America in the seventies. Sometimes, I think because of the word ‘disco’ there this backlash, sometimes, because of this word, that we get thrown into that. If you come to one of my shows, it’s not a disco show, for sure.  There’s nothing wrong with disco and I guess that’s the point I’m getting at.

“Just being thrown into this category that’s receiving all of this backlash for no reason at all other than a rock and roller was angry and upset that music had taken away his rock and roll and did this to get back at somebody – did something very cruel and vicious. And, because of that cruel and vicious thing, it’s affected a whole period of music that was free and a great period of music, actually. Even today, every rap artist that’s out right now has a dance song on the radio. I mean, it’s just crazy that something that was created 37 years ago is back stronger than ever right now. It’s a shame that it got such a bad rap. It was great music. It’s still great music.”

As I often ask during an interview, I asked KC if he was in his late teens or early 20’s today, as he was in the 70’s, how would he enter the music business today, given what he knows now.  Without hesitation, he responds.

“I went into it with a lot of knowledge to begin with. The only thing that I might do a little bit different is in the promotion and marketing department for KC and the Sunshine Band because people know my music. Sometimes, if you say my name to somebody, they’ll go ‘Huh?’ Then you say the song and they know exactly who it is. Because I handled my career in the very beginning, I managed myself and the group, the whole thing. The only thing I probably neglected in doing was the marketing and promotion of that name.  I tried to stay out of the PR part of it.  We were in teen magazines and a lot of that kind of stuff but I kind of kept a lid on how much was let out.

Would his style and musicianship be different?

“Growing up in a gospel church, I always loved music that came from the heart and soul – that moved you. That’s the kind of music that I was doing. So, I don’t think that I would change anything.

With our time just about to come to a close, I wanted to find out what’s next, CD wise, coming from KC and the Sunshine band.

“I’m thinking about doing the kind of thing that Barry Manilow and Rod Stewart have all done but not from a certain period of time. Songs that my friends like, you know what I mean? Love songs about relationships, healing, that kind of thing. And, there are talks about maybe doing a Broadway show down the line. I’m trying to get a show together for Las Vegas. A lot of talks about a lot of things, so, we’ll see.”

I’m always curious what artist listen to on their iPods.  I’m often surprised by some of the responses I get.  For some reason, given the level of musical talent and knowledge KC has, I assumed that his listening habits covered a multitude of musical genres.

He proved me right.

“Everybody. Whoever is the hottest flavor of the moment. I love that song by Eminem and Rihanna, I Love The Way You Lie.  Flo Rida’s new song, The Club Can’t Handle Me Now. I love the one by John Mayer, Half Of My Heart.  I’ve always loved all kinds of music – more R&B than anything else but I love all kinds of music.  I have a little bit of everybody from Country to Pop to Rock to R&B to Rap to Heavy Metal – I have it all on my iPod.  Pretty soon they’re going to have to have one with more gigabytes, that’s for sure!”

Our phone conversation concluded after some more small talk.  I couldn’t help but think how great it must make one feel to know that they’ve contributed great music to the soundtrack of an entire generation.  Not just music but music that brings a smile to countless faces and inspires one to dance . . . even if they can’t.

KC and the Sunshine Band has done exactly that for those of us who were teenagers in the mid to late seventies.  And, as KC mentioned during our chat, his music has inspired new artists in the creation of their music.

If you would like to keep up with KC and the Sunshine Band, you should visit his website, www.heykcsb.com. You will be able to get the latest news about the band as well as pick up music and memorabilia from their store.