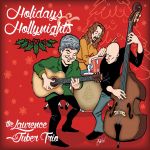 For those of you who aren’t familiar with guitar great, Laurence Juber, let me give you a few tidbits of info on him before I gush about his new Christmas CD, Holidays & Hollynights.

First internationally recognized as lead guitarist in Beatle Paul McCartney's Wings (who he won his first Grammy with), with whom he won a Grammy.

The album is loaded with ten Christmas classics dripping with Juber’s signature sound. He’s accompanied by ace studio musicians Domenic Genova (upright bass) and Michael Jochum (drums) on a selection of Christmas favorites played with an acoustic guitar style that blends folk, jazz and blues into a perfect mix for the holiday season.

Recorded at Hollywood’s famed Capitol Studios and mixed by the
legendary engineer Al Schmitt, it’s a sonic yuletide treat. If you love classic Christmas music but want it to sound just a bit different, this is an excellent album for you to own.