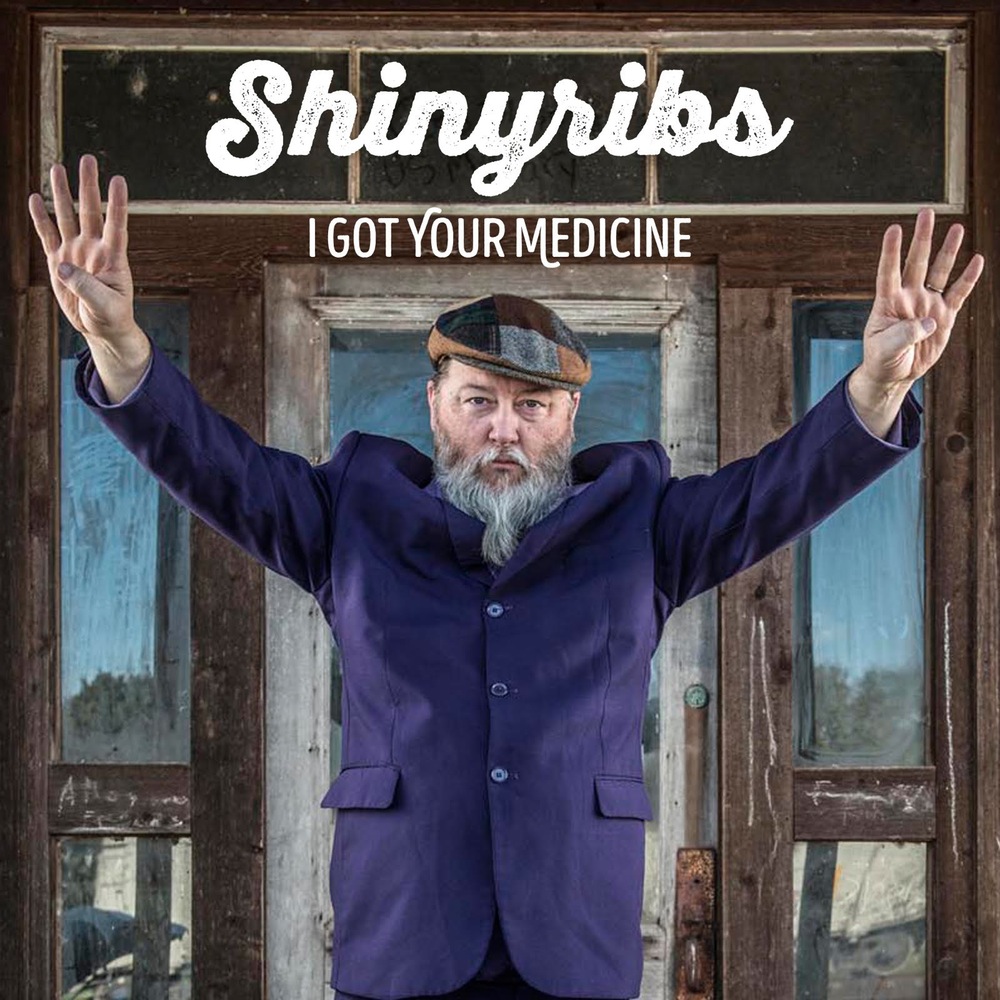 Not too many years ago, Austin singer-songwriter Kevin Russell, the man behind the entity known as Shinyribs, had a revelation. He was discussing schoolteachers with his kids, and mentioned his first two were Miss Martin and Miss Gibson. That’s when he realized his destiny had been shaped decades ago, like the headstocks of his favorite guitars.

In fact, Miss Gibson’s impact reached even further. The Beaumont, Texas, native remembers the moment his 7-year-old ears heard her pronouncement, “You are a writer.” He knew even then that he wanted to apply that skill to songs; she gave him the confidence to pursue that dream. Seven years later, he started strumming and composing, and now, on Feb. 24, 2017, Shinyribs the man and Shinyribs the eight-person band are about to dose fans with the exuberant swamp-pop soul-funk of their fourth release, I Got Your Medicine. Tracked at Houston’s legendary SugarHill Recording Studios, it carries a New Orleans R&B vibe — with extra gris-gris added by Russell’s co-producer, Jimbo Mathus.

Russell’s band years started during high school, in Shreveport, La. A move to Dallas, another to Austin, and formation of his last band, the Gourds, followed. In 2007, to cover payments on his new family vehicle, Russell started doing a monthly side gig at a Houston club, using the name bestowed upon him by a transient woman he’d once presented with a plate of ribs. In 2010, he released his Shinyribs debut, Well After Awhile. Gulf Coast Museum came in 2013.

By then, the 19-year-old Gourds had recorded with Larry Campbell at Levon Helm’s Woodstock studio, toured internationally and played countless shows. It was time to move on. With 2015’s Okra Candy, Shinyribs became a band, with drummer/percussionist Keith Langford, keyboardist Winfield Cheek and bassist Jeff Brown. With I Got Your Medicine it’s a party — attended by the Tijuana Train Wreck Horns and the Shiny Soul Sisters.

It might be a rent party at a trailer park, but hey, fun is fun, and that’s what Shinyribs are all about. Russell loves nothing more than challenging people’s sensibilities while making them laugh, which he can do merely by stepping onstage. He’s got a balding dome, longish white goatee, Santa-sized belly and no ass at all, and he’s usually wearing a wild suit picked up at a place called Soul Train Fashions (in New Orleans, natch). He’s a jovial presence, all right (a regular “hippie redneck Buddha,” said the Dallas Observer). When he straps on a guitar, mandolin or six-string ukulele and strums “Poor People’s Store,” “Take Me Lake Charles” or “Bolshevik Sugarcane,” or wiggles his non-ass while doing his best “Let’s Get It On” Marvin Gaye, he can turn even the most uptight audience into booty-shakers.

“I just do what comes natural and what turns me on,” says Russell. “Humor is really important to me in music. I love Coasters and Tony Joe White songs; you don’t know if it’s a joke or if they’re serious.”

And Russell is a master at balancing tongue-in-cheek with heart ’n’ soul. The title tune is a case in point: it’s drawn from his experience helping a down-and-out husband run errands for his anxiety-ridden wife. The lyric There’s a mall dying inside you and you never bought that dream references Russell’s love of empty old malls, which he finds “kind of depressing and kind of beautiful at the same time.” Buoyance comes from Tiger Anaya’s and Mark Wilson’s doo-wop/soul-flavored horns and backing vocals by Sally Allen and Alice Spencer.

They put a gospel groove on “Don’t Leave It a Lie,” and throw several retro influences into Ted Hawkins’ “I Gave Up All I Had.” Russell, who produced the 2015 compilation Cold and Bitter Tears: The Songs of Ted Hawkins, puts a particular hurt on that one.

“I’ve learned a lot about singing and how to write songs just from listening to his music,” he says. But inspiration comes from every direction. The honky-tonk-meets-Chuck Berry rocker “Trouble, Trouble,” for example, recalls a phrase he used to hear on a Dallas soul station.

“Tub Gut Stomp and Red-eyed Soul” gets its title from Russell’s definition of his musical style; an energetic Naw’lins romper, it’s filled with “freak-out juice” and “Jimbo stew.”

Speaking of Jimbo, Russell says their alliance was another confluence of strange events. It started years ago, when he heard Mathus’ Confederate Buddha album.

“I knew I had to meet this guy, so I got his number, called him up and said, ‘This is Kevin Russell. You may or may not know who I am, but I think you have my record collection and I want it back.’”

They’ve been friends ever since. One night, Mathus was supposed to open for Shinyribs in Beaumont after an appearance in Houston. The Mississippi resident hadn’t counted on Houston’s Friday afternoon gridlock, however. He missed the gig but showed up anyway.

“That was the first time he heard us with the horns,” Russell says. “He grabbed me after that show and said, ‘We gotta make a record! This is too good!”

Maybe his ears were captivated by the syncopated sexiness of “A Certain Girl,” their Allen Toussaint cover, or their gorgeous rendering of the Toussaint McCall/Patrick Robinson ballad, “Nothing Takes the Place of You.” Or maybe it was the bluesy “I Knew It All Along,” Russell’s very-successful attempt to write “just a real good done-me-wrong soul song,” or “Hands on Your Hips,” his take on “a good old jealousy song.”

“I Don’t Give A Shit,” a duet with Spencer, began as a country frolic about a couple who can’t stand each other, but love each other anyway. They rocked it up for the album — once they stopped laughing long enough to sing.

Gospel rave-up “The Cross Is Boss” puts a clever, slightly satirical finish on the affair; Russell says the song — like the album — is meant as a reminder that not every issue has to be taken so seriously.

“A lot of people are so tightly wound, they can’t let themselves go,” he says. “I feel like I can demonstrate to them that you can shake your hips, roll around on the floor, scream and shout, and it’s OK: people will still accept you. It’s just music; relax and have some fun.”

I Got Your Medicine can be ordered at www.shinyribs.org.