If I Left This World 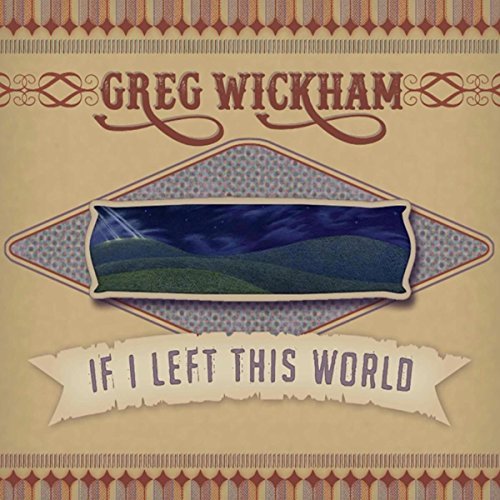 If I Left This World

Singer-songwriter Greg Wickham, who along with his brother Fred founded the critically-acclaimed Americana/roots music band Hadacol, has a new CD coming out March 17 entitled, If I Left This World. It’s his first new album in over 15 years. To celebrate.

Produced by Greg Wickham and Kristie Stremel, If I Left This World was recorded at Massive Sound and Stremeltone Studios in Kansas City and showcases a dozen all-original compositions by Greg Wickham that display his innate talent to craft both highly personal, yet universally-appealing songs. The sounds on the new disc are a natural progression and extension beyond what he brought to the original Hadacol music mix. Wickham (vocals, guitars and keyboards), is backed by a cadre of Kansas City all-stars, including his brother Fred on guitars and harmony vocals, as well as former Hadacol bassist Richard Burgess, plus singer Kasey Rausch and guitarist Marco Pascolini.

“It was great to be back in the studio with Rich and Fred,” Wickham recalls about the recording sessions. “I loved playing in Hadacol, and I definitely wanted the Hadacol sound to be a part of the record.  I think that’s definitely the case, particularly with ‘Wake Me Up’ and ‘How Much I’ve Hurt,’ which would’ve fit right in on either of the Hadacol records.  There’s always been a natural combustion that happens when the three of us play together with a good drummer, and I was happy to see the magic is still there.”

Co-producer and friend Kristie Stremel, another veteran of the Kansas City music scene and a recording artist in her own right, helped jump-start the process of getting Greg back in the studio. “Kristie and I share the same musical mentor in the legendary Lou Whitney (of indie critical faves The Skeletons and The Morells), who recorded several of Kristie’s records as well as both Hadacol records. Anyone who knew him would understand this, but ‘Lou-isms’ – words to live and make music by – damn near made Lou a third producer on this record in spite of his passing a couple of years ago.  Kristie and I both were driven to make a great record first, and to worry about what to do with it later, which made recording with her one of the most enjoyable experiences I’ve ever had.”

Greg Wickham relates the story of his musical hiatus: “In 2003, Hadacol’s drummer Brian Baker moved from Kansas City to Virginia. At the time, the band had been working non-stop for several years and the grind had taken its toll, so we decided to take a break for a few months before beginning the search for a new drummer. A few months became a few years, and before we knew it, we’d all moved on with our lives and gone in different directions.  My direction was decidedly un-rock and roll – I fell in love, got married and had three kids. I continued to write and play from home – the music never really leaves your blood – but avoided the business end of the music world.

“Ultimately, it was my kids that led me back to the studio. I’d always been a little jealous of my friends Dave and Jimmy Nace because they had old country records of their dad, singer and guitarist Johnny Nace. They could still hear his voice even though he’d passed away years before I met them. When my dad died, I barely had any recordings of his voice (in fact, I included on this album the only clip I have of him singing, which comes from a particularly spirited family sing-along on Thanksgiving night, 1992, of Marty Robbins’ “Big Iron.”).

“I wanted to take it a step farther – my kids would always be able to hear my voice on the Hadacol records, but I wanted to send each of them a more personal message they could carry with them after I’m gone. At the urging of Kristie Stremel, I began gathering songs for a full-length record and headed into the studio with the idea of creating a record that was intensely personal yet universal in scope. And at the time I thought ‘This may be the only record I ever make, so let’s make the record I want.’ This meant making a great sounding record, working with friends and family who happen to be great musicians, appreciating my past, enjoying the present, and thinking about the future.”

As the songwriting and the recording sessions began to conceptualize, Greg was able to start bringing some long-time friends and family into the fold to work with him again. “I was lucky enough to have the enthusiastic support of my Hadacol bandmates (brother Fred and bass player Richard Burgess), as well as a whole slew of Kansas City’s finest musicians. The record evolved into an exploration of mortality and legacy, as well as a recognition that life is short, so you’d also better have as much fun as possible while you’re still able to shake, rattle and roll.”

The sound bite of Lou Whitney that appears on the disc is from some random recordings Kristie Stremel made while working in the studio with him several years ago. Stremel and Wickham wanted Whitney’s voice on the record as a lead-in to “Almost to Springfield,” which is somewhat of a tribute to the town and the fun they had working on the Hadacol records there. “I wrote ‘Almost to Springfield’ before Lou got sick. He loved the song, but we never got back into the studio to make another Hadacol record and record it.  Now, the song feels more like a tribute to him than anything.”

Wickham is also quick to point out the contributions his brother made on the new album. “Fred’s work on ‘Waterfall’ and ‘Wake Me Up’ is the last session he recorded with the ’68 Telecaster he played for 30 years, including pretty much every note he played on the Hadacol records. A few days later, some asshole stole his car with the Tele in the trunk. They found the car, but the Tele was long gone. At least it went out in fine fashion – that’s some damn good playing on both of those tracks.”

Another local Kansas City talent deserving of further recognition is vocalist Kasey Rausch, who sings with Greg on the lead track’s duet. “She’s an outstanding songwriter who enjoys success as a solo artist and sings with Fred and Marco Pascolini in their respective bands,” Greg states. “I heard her sing Patsy Cline’s ‘She’s Got You’ and immediately knew she was the one I wanted to sing ‘If I Left This World’ with me. We were shooting for that vintage country sound, and Kristie and I both agreed that Kasey was the perfect singer for the part. I wrote the song the day Little Jimmy Dickens died. I was listening to his songwriters’ circle version of ‘Life Turned Her That Way’ and wanted to write a timeless country song in that same vein. ‘If I Left This World’ just fell out of me when I picked up the guitar that night.”

Greg also has high praise for Marco Pascolini, whose snaking guitar lines weave their magic throughout the album. “Marco is probably the most well-known and sought-after guitarist in Kansas City. He plays a style unlike anyone else. He’s the guitarist all the other great guitarists watch slack-jawed. He was the founder of Mister Marco’s V7, one of the most interesting avant-garde bands to come out of KC and now plays guitar and pedal steel with Kasey in her bands.”