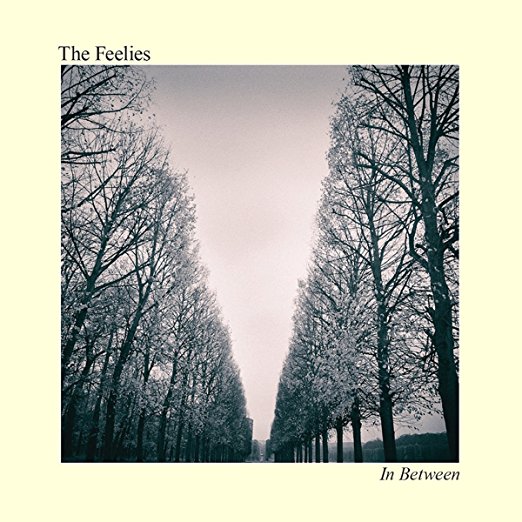 In the midst of multiple events celebrating their 40th Anniversary as a band, New Jersey-based avant-pop pioneers the Feelies found time to record In Between - their first new studio album in over 6 years. The album was produced by the group's guitarists, Glenn Mercer and Bill Million with most of the recording done at Glenn's home studio in Haledon, NJ.

The twin-guitar attack of songwriters and founders Mercer and Million is still at the core of the group's infectious sound paired with the driving rhythmic team of drummer Stan Demeski and percussionist Dave Weckerman, with Brenda Sauter's bass guitar proving a rock solid foundation. In Between finds them bringing fresh sonic maneuvers into the mix that make it both the quietest and most furious music they've created in their long and vaunted career. Glenn Mercer told Impose Magazine:

"On the new record we did a lot of it at my house in my home studio with extra equipment, explains Glenn Mercer. "It's the same room where we rehearsed. We've been here since we reformed and a little bit prior to taking the hiatus in the 90's. So it's a room we're really familiar with and feel comfortable in. We also did some recording at an engineer's studio, so it was all done very low key. We refer to it as "off the clock" when you're not paying an hourly rate, so in that sense, it was a lot more relaxed. I don't think anyone would notice a drastic change in the sound or the vibe of the record. I think it sounds a lot more relaxed and laid back."

"I think all of our albums reflect a certain degree of reaction to the work that we previously did and In Between is no exception," continues Bill Million. "We liked the sounds and the feel of the demos for this album and we thought it would be difficult to capture that in a recording studio. So that was our starting point and it evolved in a much more relaxed way that loaned itself to more creative interplay. Time wasn't a component. If you let it, music can take on a life of its own and we wanted to allow the songs to develop with that idea in mind."

Formed in Haledon NJ in 1976, The Feelies have now released six albums- including their critically acclaimed and influential debut Crazy Rhythms, which was voted 49 in the top 100 albums of the 1980s by Rolling Stone magazine and chosen by Spin Magazine as #49 of the best alternative records of all time. Their music has left an indelible mark on the landscape of rock and roll. Supporting the release of their first four albums the band appeared on The Late Show With David Letterman and in concerts with The Patti Smith Group, REM, and Bob Dylan as well as touring with Lou Reed.

In 2008, the Feelies reunited after a 17-year hiatus to open for long time admirers Sonic Youth at Battery Park and then resurrected their tradition of playing low-key gigs at strategic intervals throughout the year rather than doing lengthy tours. In 2009 Bar/None reissued Crazy Rhythms and The Good Earth, this being the first band-sanctioned CD release of the former.  In 2011, they released a new studio album Here Before of which England's The Wire enthused, "Here Before picks up as though they'd never left. The second line- up is fully present, and the basics of their sound has filtered through so many younger bands (from Yo La Tengo to SF Seals to The Chills) that the music possesses a great kind of faux- familiarity. "Time Is Right" sounds something like The Terminals doing a Stooges tribute tune. It- and some of the Velvets riff- lifts that occur during the album's later moments- make me remember how nuts this group seemed 30- plus years ago."

In honor of the group's 40th Anniversary Bar/None Records re-released their third and fourth albums, Only Life and Time for a Witness in early 2015.  As a special Record Store Day release Bar None/Coyote Records co-released the Feelies Uncovered, later in the year. This was to be a limited edition 12 " EP featuring studio recordings of four covers of songs by Bob Dylan, The Doors, Patti Smith and Neil Young, none commercially available before. They continue to regularly perform live. Their music has been featured in the films Married to the Mob, Something Wild, Prelude to a Kiss, The Truth About Charlie, The Squid & the Whale and Ricki and the Flash.

Rolling Stone has cited The Feelies as "a template of formal perfection." They have influenced bands like REM, Yo La Tengo, Real Estate and WEEZER. In Between is rock and roll that is both classic and modern.

Bobby Rush Is Rawer Than Raw
513 views
Posted September 2020 We at Boomerocity fell in love with Bobby Rush when we had the opportunity to...

Joe Louis Walker Talks About Being Eclectically Electric
J.P. Pennington Talks of Exile and 42 Years of Kissing People All Over