Inside Pee-Wee’s Playhouse: The Untold, Unauthorized and Unpredictable Story of a Pop Phenomena 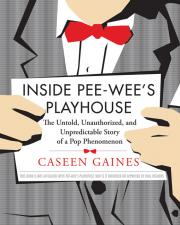 When I was a kid, there were certain shows that I loved as a kid that, unbeknownst to me, were full of inside, adult jokes and double entendres that were quite funny . . . if I had known what they were talking about.

I’m referring to shows like Batman, The Monkees and The Wallace and Ladmo Show that had my parents laughing at comments that I had no clue what they meant.

Fast-forward to the mid-80’s. My lovely wife and I are the proud, doting parents of our toddler daughter. One of the Saturday morning TV shows that our daughter adored was Pee-Wee’s Playhouse. She delightfully scream “AH-AH-AH-AH!!!” whenever that episode’s “secret word” was spoken. (Oh, and the secret word for today is “purchase”)

My wife and I started watching the show right along with her and, I can’t speak for my wife, but I kinda got the vibe that there was lots of inside jokes in the show but I wasn’t hip enough to catch on. I just knew it in my knower. I mean, c’mon! This “man-child” dressed real dweeby – I mean, this kid-man would’ve been heckled and pounded at the schools I went to. I know because I was and, if I was, the Pee-Wee fella sure as heck would have.

Well, eventually, I bought the “How To Be Hip Enough To Understand Pee-Wee’s Playhouse For Dummies” book and became hip to the Hermster’s vibe (or however I’m supposed to say it). The more in tune I was, the more hysterical the show was to me.
Movies, toys, and phrases from the show all became part of the jargon of the 80’s. All from a quirky comedian whose real name is Paul Reubens and who knew that he was quite the marketing empire guru?

Well, there was lots more to this Pee-Wee Herman phenomena than met my four eyes and author Caseen Gaines spews out all sorts of “secret words” about the behind-the-scenes world of Pee-Wee’s Playhouse in his incredibly good book, Inside Pee-Wee’s Playhouse: The Untold, Unauthorized and Unpredictable Story of a Pop Phenomena.

Gaines meticulously details the rise and fall of Reubens’ alter ego and the show and movies that was built around it. It’s hard to imagine that the person who my daughter adored as a child could be a cold and calculating son of a gun. Pee-Wee was also accused to be ruthless in his scheming to allegedly cut some of the show’s key creative influences out of credit and compensation for their work. I’ll leave that to the readers to decide. I’m still a Pee-Wee fan.

Oh, and Gaines also opens the barn door, so to speak, on the infamous “incident” involving Pee-Wee and his, uh, um, er, “Herman” in 1991 as well as being accused of possessing child pornography in 2002 and the impact these incidents had on his career. Regarding the ’91 incident Gaines writes what I’m trying to determine is another inside joke that I’m not hip enough to get: “Toy stores were yanking merchandise off the shelves . . .” I couldn’t find any reference to it in my Dummies book, though.

The book is chock full of unpublished photos and never-before-told anecdotes about the show. There is also incredible episode guide that summarizes some of your favorite Playhouse shows.

I mean, seriously, it’s pretty cool reading and is a must read for pop culture fans as well as Pee-Wee Herman/Paul Reubens fans. All those reasons and more are certainly why I have the book in my library.

So, why don’t put this book on your Christmas list of things to purchase?
AH-AH-AH-AH!!!