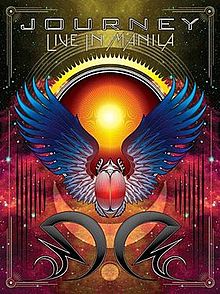 The band, Journey, is re-releasing their 2009 concert DVD, Journey Live In Manila, on DVD+2CD
and Blu-ray+2CD in North America and what  package it is. It's the first time the audio has been available in the world.

Filmed in 4K resolution utilizing RED technology to deliver extraordinary quality, this release captures Journey's concert at the SM Mall of Asia in Manila, Philippines on March 14th, 2009. It marked the homecoming of the band's then newly arrived singer and frontman, Arnel Pineda.

Journey delivered as they always have: an inspired performance in front of an adoring crowd as they played a set of their greatest hits interspersed with tracks from

With timeless hits like Wheel In The Sky, Lights, Open Arms, Separate Ways (Worlds Apart), and many other hits captured live on this DVD and CD, Journey Live In Manila is a must-have addition to just about any music lover's personal library.