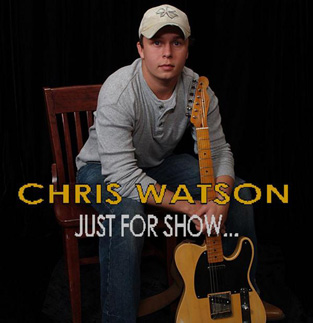 Recently, I caught Walter Trout’s show here in Dallas. The opening act was a local band, The Chris Watson Band, headed by its guitar slinging namesake. As I said in my review of the concert, Watson plays the rock and blues like artists many years his senior. I briefly chatted with Watson after the show and told him that I wanted to chat in the near future. By the next week, I had his debut CD, Just For Show, in my hands and his incredible blues bouncing around in my head.

Slapping the disc in my player, I was immediately reminded (as if I ever forgot) why I was blown away by Watson. This guy’s songwriting is sophisticated and intricate without being over-done. Guitar greats like Clapton, Vaughan, Mason and many others came to mind as I listened.

One of the hottest tunes on the disc is No Sympathy as Watson seems to simultaneously channel Stevie Ray Vaughan and Jimi Hendrix. It’s like an audio holograph and trying to discern which artist is blasting through. Another personal favorite (if I had to choose – and please don’t make me choose!) is Say Your Goodbyes – a perfect by-the-numbers love-gone-wrong blues. The keyboard work by Eric “Scorch” Scortia is wicked, wicked good. Oh, and Chris’s guitar work is indicative of his perfect fluidity of the strings.

Another goody on this disc is She Can Be Free. It serves as another example of beautiful audio holography, conjuring up images of The Black Crowes and Mick Taylor. And, yet, while this and other songs show some of Watson’s influences, his sound is distinctly his own. He is helped in creating that sound with Bill Cornish and Mike Brown alternating on bass, Brian “H-Bomb” Ferguson and Glen “Bono” Saunders alternating on drums and the aforementioned Scorch on keyboards.

Buy Just For Show and keep your eye on this guy. He’s going places and we’ll be reading about him for years to come.