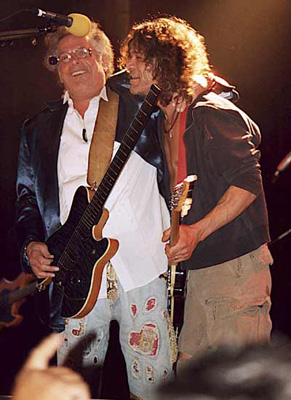 Do I have some great news for you!  You can go back in time and it won’t cost you your future.  That’s right, folks!  Coming to a city or town near  you, you can catch the tour that is getting the Baby Boomer Generation’s tongues a-waggin’ and classic rock fans salivating like one of Pavlov’s dogs.

That tour?  HippieFest and, this year, it has a dynamite line-up of some of the favorite artists and bands that blared from your radio while you wowed your imaginary legions of fans while you lip-synched or played the world’s best air guitar.  Artists such as Chuck Negron (the voice of Three Dog Night), and Flo and Eddie, Felix are on the line up as are Joe Molland (Bad Finger), Mitch Ryder, Brewer and Shipley, and Mountain and the surviving half of its founding duo, Leslie West.  West’s founding partner, Felix Pappalardi, was the victim of what was ruled as a negligent homicide committed by his wife, Gail Collins Pappalardi, in 1983.

Leslie West is a man who is comfortable with where he is in life while touring with his band that enjoys an impressive 40 year legacy that still commands broad support.  While Mountain still has fans that remember when they performed at Woodstock and bought their first vinyl album, West is introducing a new generation to his signature Mountain sound.  The bands iconic hit, Mississippi Queen, has been covered by artists and bands ranging from Lynyrd Skynyrd and ZZ Top to being sampled by current Rap artists.  This new surge in popularity has, no doubt, been helped by the band’s music being featured in TV shows, movies and, more recently, in video games.

Before the band boarded their tour bus to join the HippieFest tour, I had the privilege of chatting with Leslie West.  We started off by talking about what Mountain has been up to lately.

“Well, we just finished two months with Joe Satriani and all over the country and had the holidays, working on my guitar DVD that should be out soon and called, ‘Sounds of the Stories’ and getting ready to go on this tour, HippieFest  . . .”.  He also mentions with pride that he and the band will performing again at Woodstock forty years and one after the band made its appearance there.  In addition to performing the set they played in 1969, there will be a new, life changing event taking place on stage:  He’s going to marry his fiancé.

I was curious about the backstage environment between the bands on the HippeFest. “We travel with our own bus so we don’t really hang out to much.  We have a good time hanging out with Flo and Eddie and Felix Cavaliere.  I’ve known Felix for a long time – we’re old buddies.”  Later, he adds with a laugh, “Yeah, (the bands) us to talk a out buying cocaine and now they talk about buying Lipitor and Plavix and drugs like that, you know?”  This, no doubt, leads to a healthier line-up than in days gone by.

I asked West if the inclusion of “Mississippi Queen” in Guitar Hero III was creating a larger, younger audience for Mountain.

“Well, it’s been on Rock Band, also.  When you have a game like that, that did over a billion dollars in business, it sure does.  And, also, Kanye West and Jay-Zee used my songs for some of their songs, too.  That has helped quite a bit.   “99 problems” by Jay-Z  was my music is being sampled.  Kanye West is the same thing – the song, Long Red.  So, all of a sudden – go figure!”

With forty years of touring under his belt, Leslie West has seen and done it all.  I asked him what the main differences are that he sees in touring today as compared to the 60’s and 70’s.

“A better tour bus!  That makes it a lot easier because I hate to fly and it’s a pain in the *** - security and all that stuff and, uh, it takes a toll on you.  But, on the bus, you finish playing, you go relax and all of a sudden, you’re moving and in the next city and if you want to go to the hotel, you can relax.   Just to play the shows is tough enough.

“You know, what happened, I think, after 9-11 when nobody could fly and that all happened.  Well, these corporations and everybody else started saying, “Wow!  A tour bus is the only way we can get anywhere.  And they started using them and they started making them nicer.  Everybody wants a tour bus now. “

The Woodstock generation was one that clearly lived for the day.  I asked West, “When you were touring back in the 60’s and 70’s, what did you expect the world to be like 40 years later?”

He bluntly states, “I didn’t expect anything.  I was lucky we made it to a month!  I was a kid and we were writing rules as we went along.”  Reflecting on the idyllic mindset of those days, he adds, “You could leave the doors to your house open and, you know, nobody had guns, really, and, if you did, you were just shooting rabbits up in the country.  But, like Dylan said, “The times, they are a-changin’.”

This lead to talking about what he missed from those days.  He shared about missing being younger and thinking he was “bullet proof”.  “I could throw myself off a building and I wouldn’t hurt.  We’d finish – especially when we did this last tour with Satriani, I think it was 35 shows in 42 days.   But I also did the encore with him.  So, Mountain did our show then left and he did his show and I had to come back and do a half an hour with him.  So, it was, like, 70 shows in . . . 45 days.  It was a lot of work.  It was one after the other so you just keep going and don’t get a chance to exhale. “

Conversely, he mentions what he doesn’t miss about those days.  “What I don’t miss is . . . sometimes we had to do two festivals in one day.  (We would) get on the jet and do the Cincinnati Pop Festival then fly to Atlanta at night and do the Atlanta Pop Festival.  It was really rough.  I mean, all of a sudden, the festivals would hit and – I was lucky enough to be on them but it was an awful lot of travel.  I always thought we got paid to travel, not paid to play.  That’s what it felt like.

Still comparing the 60’s and 70’s to today, the conversation turns, naturally enough, to today’s music.  He loves Creed and says that “Mark Tremonti is a really great guitar player.”  But Creed is about the only current talent that commands his respect.  He doesn’t see anyone that offers anything new.

I suggest American Idol’s Adam Lambert but West slaps the offering down by saying, “Yeah, but there is nobody that is totally so -  so – so unique that you think, “Wow!  I never heard anything like that before!  The more things change, the more they stay the same.”

Speaking of guitars, West lights up talking about his “baby”:  His signature line of guitars manufactured by Dean Guitars.  “.  I’m really involved with my Leslie West Signature Guitar with Dean Guitars.  It’s important to me.  We got into it, finally, and I have my own model and now we have four models.  Check out DeanGuitars.com and look at the 40th Anniversary Leslie West Guitar.  We made this great looking guitar with inlay on it and a peace sign with my initials in it for the anniversary of Woodstock.

“ . . . they sold out of the anniversary ones they made.  They were quite expensive.  They only made 10 or 12 but the other ones are doing very well.  It took me a while to figure out what I wanted (the guitars) to look like.  I use to play a Les Paul Junior but this one is like a Ferrari version of that.  And, then, also we have my own Leslie West pick-ups – “M.O.T. “ (Mountain of Tone) pick-ups with Dean Guitars.  And, this summer, we’re coming out with the 40th Anniversary Mississippi Queen cow bells.  So, we’re doing pretty good.” 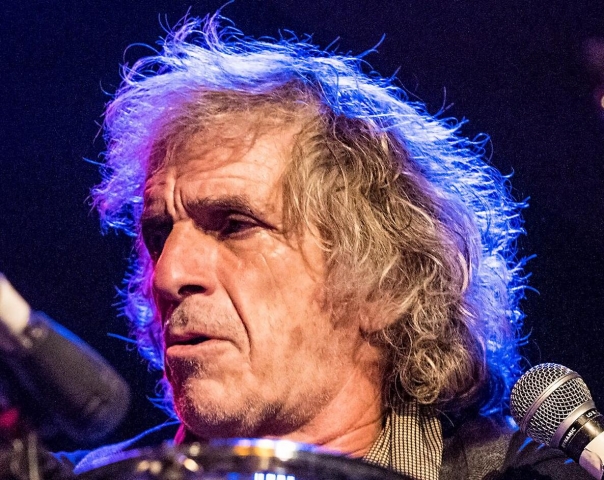 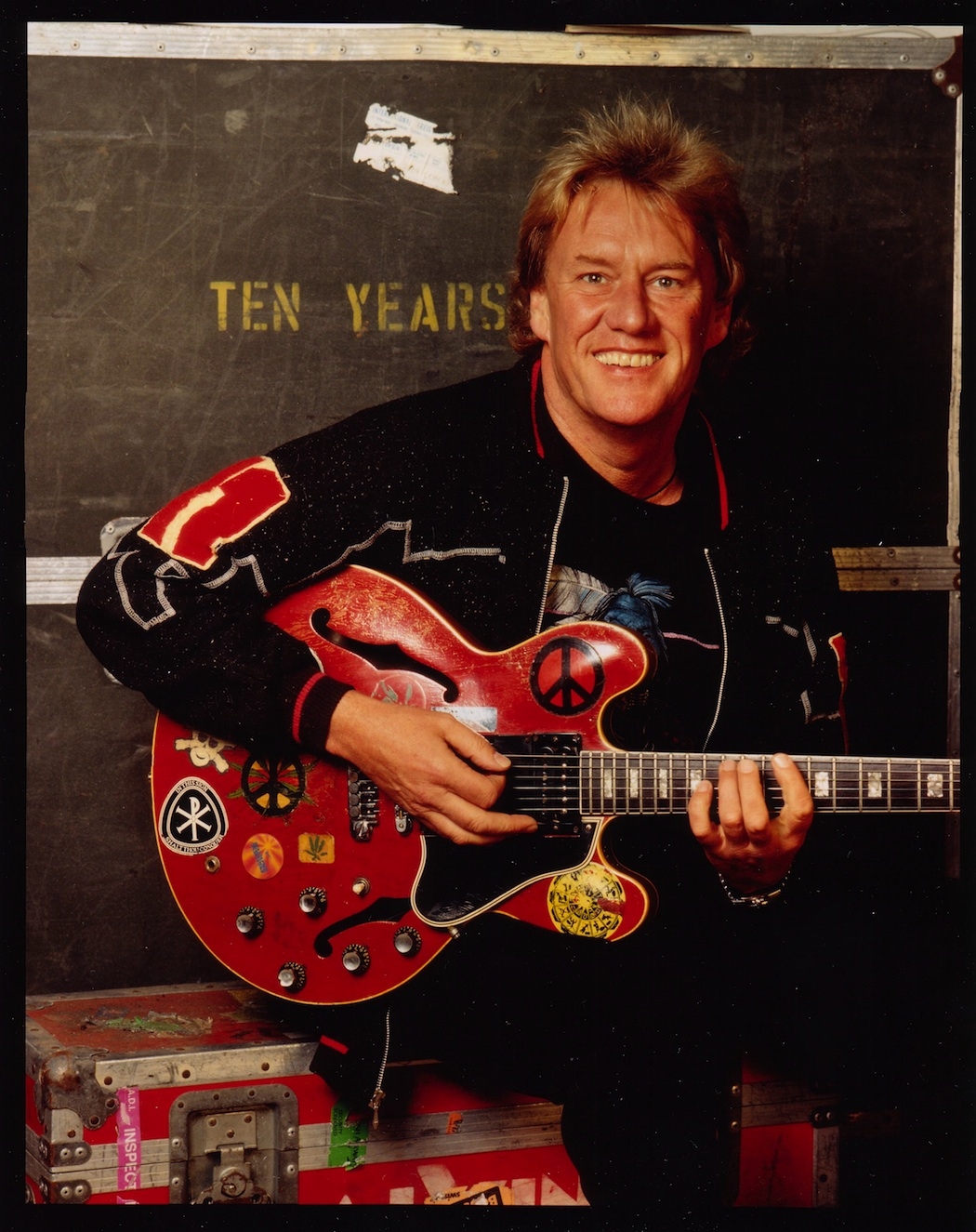