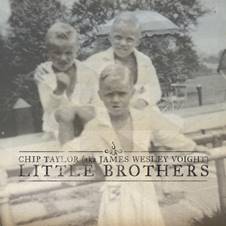 Legendary songwriter Chip Taylor was inducted into the hallowed Songwriters Hall of Fame (along with Marvin Gaye, Tom Petty, and Elvis Costello) in a special ceremony taking place on June 9 in New York City. The author of “Wild Thing,” “Angel of the Morning” and “Try (Just a Little Bit Harder),” among many others, continues to make his mark on the music world - his last album, The Little Prayers Trilogy, received massive critical acclaim, landing on Uncut magazine’s Best of 2015 list and was described as a “masterpiece” by Mojo.

In celebration of his Hall of Fame induction and the release of two new releases, Taylor will play a special show at the famed Cutting Room in NYC on June 29.

Taylor’s new album, Little Brothers, is a charming collection filled with engaging, graceful songs that will make you both smile and think. It is the perfect soundtrack for a peaceful, sunny morning; a quietly fun album that also rewards close listening.

The album’s title track has special meaning to Chip Taylor. “As the song says, the episode I sing about is actually from a dream,” he states. “The morning after, I called both of my brothers to document the dream so it would never be forgotten. There was lots of good natured laughter in those conversations. Later that day, I further documented the dream events with this song.”

Another special song in this collection is “Times Goes By,” which he dedicates to his wife, Joan. “Certainly one of my favorites of all the songs I’ve ever written,” he declares. “It closed most shows on my recent Sweden/Norway tour. I’ve always felt that, if a songwriter communicated an honest, passionate feeling – no matter how personal – it would connect with others. This song is a good example. On that tour, this song totally connected.”

More prolific than ever, Taylor is immediately following Little Brothers with a mini-album, I'll Carry for You. The instant classic title track was inspired by Canadian golfing sisters Brooke (currently ranked #4 in the world) and Brittany Henderson, who caddy for each other, and is a song about the power of love. The other songs have similar themes of Olympic passion, just in time for the 2016 Rio games.

Chip Taylor has been writing and performing for nearly 60 years and shows no sign of slowing down. The New York Times says it best, “If you only know him as the as the guy who wrote ‘Wild Thing’ and ‘Angel of the Morning’ — you don’t know him! Chip Taylor is making some of the most distinctive acoustic music around today.” With the release of the Little Brothers album, and the EP, I'll Carry for You, he continues to engage and delight music fans everywhere.

Creating distinctive music that is also enduring and influential has been Chip Taylor’s métier over the course of what is closing in on five decades as “one of America’s finest songwriters as well as a masterful singer and performer,” says Rolling Stone. His two best-known songs are only some of the many pop, rock, country and R&B chart hits he wrote in the 1960s (Janis Joplin, Aretha Franklin, Jimi Hendrix, Willie Nelson, Dusty Springfield and Frank Sinatra all recorded his songs). Taylor was one of the pioneers of the pivotal country-rock movement as a recording artist in the 1970s. His 1973 album, Last Chance, remains a beloved cult classic. But after refusing to play by the Nashville establishment rules, Taylor gave up music for full-time professional gambling in 1980.

“Chip Taylor could’ve rested on his laurels years ago and still been way ahead of everybody else today. Lucky for us he didn't and he’s making some of the most relevant music out there,” said Buddy Miller just last year. Since returning to music in 1996, he has enjoyed elder statesman stature within the Americana, contemporary folk and singer-songwriter scenes as an artist in his own right, as well as in collaboration on albums and in performance with Carrie Rodriguez, John Prine, Kendel Carson and John Platania. In a remarkable and prolific run, Taylor has released nearly an album a year since his return, each rising high on the Americana chart. As England’s The Guardian notes, “Chip Taylor, like Johnny Cash, is well worth rediscovering by a new generation.”

Taylor has been involved in a series of amazing projects in the last several years. Norway’s premier folk singer, Paal Flaata, recorded a full album of Taylor songs, Wait by the Fire, and rode it to the Top 10 and a Norwegian Grammy nomination. His duet with John Prine, 16 Angels Dancing 'Cross The Moon, was released on a special 10-inch vinyl for Record Store Day in 2015. Chip will also be joining with Carrie Rodriguez for a reunion tour in the fall behind the 10th anniversary deluxe reissue of their Red Dog Tracks album. The Grammy-nominated Yonkers NY (2009) shows his facility with storytelling within songs.

Coming in 2016 is a book/CD, Son of Golf Pro, which combines the story of growing up on the golf course with often hilarious songs about the sport, and a deluxe reissue of his three 1970s Warner Bros albums (including Last Chance).

Mojo magazine is including a new and exclusive Chip Taylor version of Dylan’s classic “One of Us Must Know (Sooner or Later)” on the cover-mount CD of their latest issue. Taylor’s version will also be on the publication’s limited pressing of 3,500 LPs, titled Blonde on Blonde Revisited, featuring the complete original Dylan album songs covered in full on two blonde-colored vinyl LPs.

As Chip Taylor’s muse continues to fire on all pistons, musical tastemakers agree that fans and listeners should tune their ears into the continuing creativity of a true musical master. “If names like Willie Nelson, Guy Clark, Kris Kristofferson and Townes Van Zandt mean anything to you, you should make a point of discovering Chip Taylor,” urges critic Anthony DeCurtis. “Whether you know it or not, he’s earned his way into that exalted company.”

Pam Tillis Is Looking For A Feeling
1118 views
Posted June 2020 Photo by Matt SpicherLike many of you Pam Tillis fans, I first became aware of her...