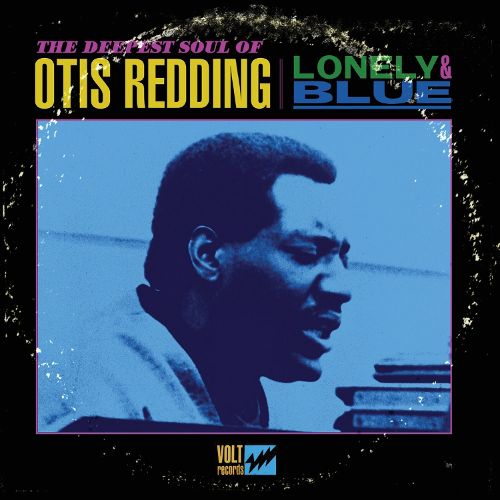 I was a snotty-nosed third grader in the deep south when the great Otis Redding’s life was cut tragically short in a plane crash near Madison, Wisconsin. At the time, my musical interest consisted of Elvis Presley and anything I happened to hear in church. A few short years later, though, I developed a love and appreciation for Redding’s incredible body of work.

That said, imagine my excitement when I received my copy of the latest release of Otis’ work from Stax Records, Lonely & Blue: The Deepest Soul of Otis Redding. This album could pass for a title Stax/Volt might have released in the late ’60s. The look of the album reflects Stax’s design themes of the era and even looks like many of my worn album covers. But in fact it’s a collection that never existed, until now. This incredible collection homes in on one mood and one theme —heartbreaking, yearning ballads — of which Redding had many.

Lonely & Blue: The Deepest Soul of Otis Redding contains the hits like I’ve Been Loving You Too Long, These Arms of Mine, My Lover’s Prayer, Free Me alongside many lesser-known songs such as Gone Again, Open the Door, Waste of Time, Everybody Makes a Mistake, to name a few. They’re all included in this compilation because they share the tangled theme of sorrow.

According to producer David Gorman, “Given how nobody delivered a gut-wrenching sad song like Otis, I always felt he should have made an album you could put on late at night and settle into with a glass of something strong. The mood and the subject of every song is the same — Otis, heartbroken, and begging for love. I tried to find the saddest most potently heartbreaking songs he ever sang, with no regard for chart position or notoriety. There are a few hits on the album, but they’re there because they fit the mood, not because we wanted to include the hits.”

For instance, an alternate version of I’ve Got Dreams To Remember features lyrics that are darker and tell a more personal story than the better-known hit version. Little-known tracks like Gone Again and A Waste of Time are given the same weight as I’ve Been Loving You too Long. The motif of love is even subtly addressed in the sequencing, the album closing with Send Me Some Lovin’ and My Lover’s Prayer.

The concept of Lonely & Blue: The Deepest Soul of Otis Redding plays out in the packaging as well, which was intentionally designed by Gorman to look as if Redding actually did put this album out at the height of his career. The typography, color palette, and layout are all meant to adhere to the Stax/Volt LP designs of the time. This extends to the liner notes, which are written in the present tense and credited to a fictitious DJ so that they read as if they were written while Redding was alive at his peak.

“The goal,” explains Gorman, “was to create the best album Otis never made and ‘reissue’ it in 2013 rather than do another hits compilation. We hope this album will reframe him as something more than an oldies radio staple and become his Night Beat (a classic 1963 Sam Cooke LP) — the album that exists as a starting point for people wondering why so many consider Otis Redding the greatest soul singer of all time.”

Chris P. James Talks About The Burrito Brothers, Their New LP, and The Legacy of the Band
Mitch Ryder