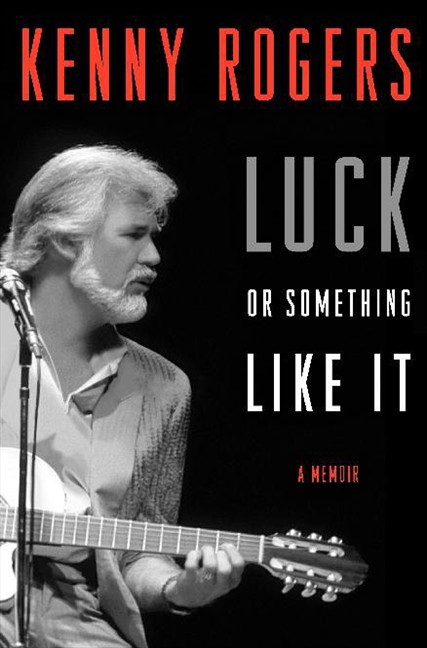 For over fifty years, Kenny Rogers has been a fixture on the American music scene with his chart topping hits such as Ruby, Don’t Take Your Love to Town, Lucille, Love or Something Like It, Lady, Islands in the Stream, and The Gambler, among a multitude of others. Now for the first time, this living legend reveals his incredible rise to fame, detailing his personal highs and lows with his memoir Luck Or Something Like It.

Speaking candidly, Kenny reflects upon his rough childhood in the South – living in the projects of Houston and growing up in poverty and how his father’s alcoholism greatly impacted his career by helping him avoid the common pitfalls of substance abuse that often plague fame. Forever indebted to his mother for her thought-provoking wisdom and pitch perfect advice, Kenny entered the music business with a reputation for hard work and a positive attitude. These homegrown traits coupled with his strong faith enagbled Kenny to persevere through the difficult periods of his career – the breakup of his first professional musical group, The First Edition, and the struggles he faced trying to go solo.

Throughout Kenny’s career he has reinvented himself time and time again, managing to stay successful and current while also being true to his values as a performer. Along the way he has experimented across many musical genres with some of music’s greatest talents, and here he discusses his journey in depth and reveals the secret to his success: his ability to remain open-minded and his willingness not to let his past dictate his future.

Featuring a cast of characters ranging from Elvis to Dolly Parton to Ray Charles to Dottie West to Lionel Richie, Rogers’ story offers a candid and eye-opening look at the world of country music, showing how mainstream success led to crossover artistic partnerships that pushed his musical boundaries, but forced him to go against the trends of the Nashville establishment as he combined country music with other sounds from pop music.

· Kenny and Dolly: As one-half of one of popular music’s greatest duos, Kenny writes warmly about his longtime working relationship with Dolly Parton, telling never-before-heard stories about their first meeting and what they’ve meant to each other all these years.

· Kenny and Lionel: Discussing how his open-mindedness always led him to experiment musically and avoid developing a stale, complacent style, he explains the steps that led him to approach Lionel Richie in the early 80’s about recording a song together. The result of that song – and his willingness to experiment beyond the strict boundaries of country music – was the massively successful Lady and a partnership that would last for decades.

· Inside The Gambler: Kenny goes backstage on the making of a cultural phenomenon – the song and TV movie franchise that would become one of his greatest legacies: The Gambler.

· Kenny and his personal life: Writing honestly about his marriages and his struggle to stay married through the years, Kenny explores how his drive for success and his constant life on the road ultimately made marriage difficult for him despite his family values and instinct to settle down. Finally, he feels that he has achieved the elusive work-family balance with his current (fifth) marriage – a heartwarming story of finding love later on in life.

Released just in time for Christmas shopping, Luck Or Something Like It is the perfect gift for yourself or those Kenny Rogers fans on your shopping list.