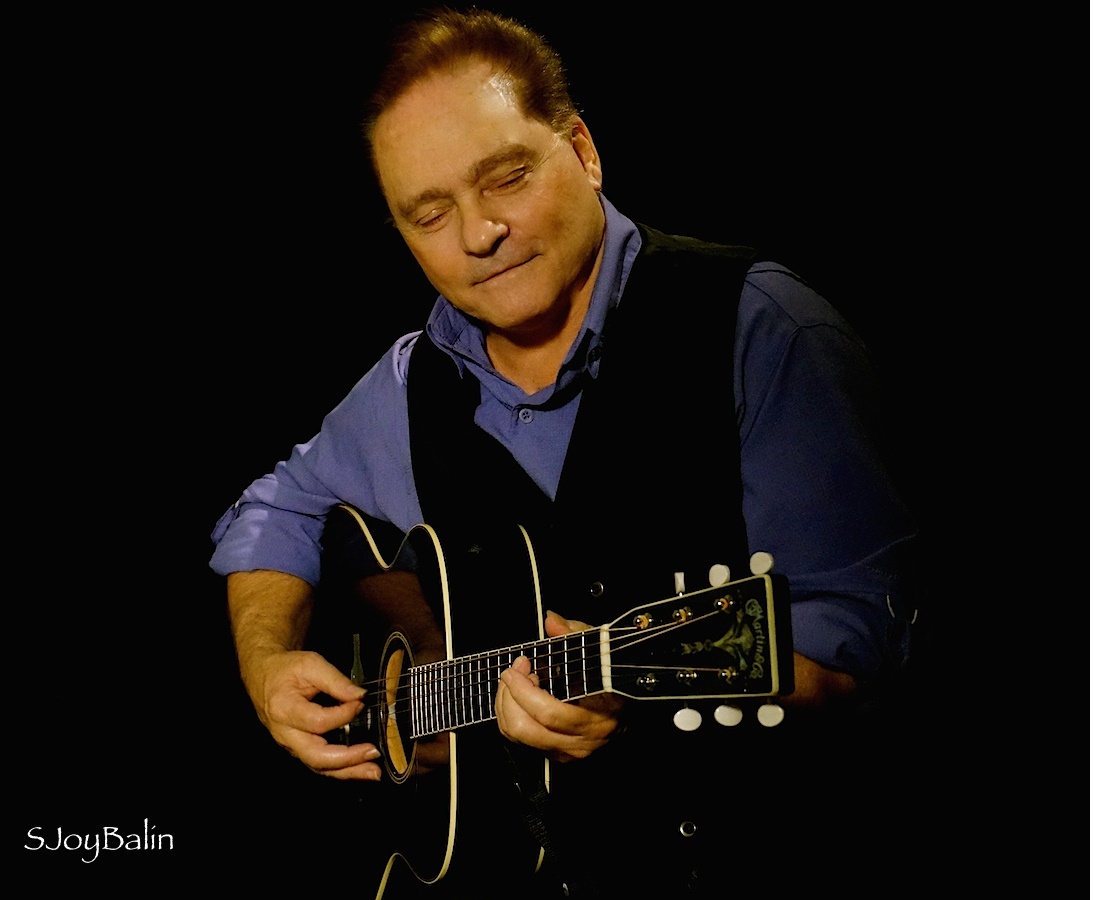 Photo by Joy BalinIt’s hard to believe that the iconic San Francisco band, Jefferson Airplane/Starship, took off fifty years ago but it’s true.  To commemorate this big anniversary this month, the band’s co-founder and key songwriter, Marty Balin, is releasing a two CD set of newly arranged old hits spanning the entire life and mutation of the band.  It’s entitled, “Good Memories. Then, in February, he’s releasing a CD of all new songs that he’s written, “The Greatest Love.”

I recently called up Marty at his Florida home to chat about both CDs, whether or not there would be any new work from his former band mates, and what his future plans are.

We started off by talking about whether he had any idea the band would be remembered and listened to for fifty years and counting.

“No, I had no idea. Who would’ve ever thought that far ahead, anyway? It was fun to redo them all. I’ve been doing some of these things live. The audiences loved it and have wanted it on a record. It happened to be the 50th anniversary and it was a good idea. Put ‘em on a record. Why not? And it was a good set up for my next, new record, you know?”

With, “Good Memories”, Balin tackles the classics with some different spins, arrangement wise. I asked him if these are variations that existed back when he originally wrote the songs or are if they are relatively new.

“They’re not new ideas. They’re how I do them now, live. I don’t have all these instrumental breaks and everything - none of

the musical interludes. I give them the body of the {mprestriction ids="*"}song. I make it a ‘song’ song. I don’t go off on all these jams.”

Speaking of the fans being the catalyst behind “Memories,” Balin said:

“They inspired me to do it. They’d call out these old tunes and I started doing them. My guitar player is hearing these songs around and asking me about these different songs; jogging my memory. So, we started doing them live. People were getting off on it. It coincided with ‘fifty year later,’ so we said, ‘Hey, let’s spit it out. What the hey?’”

Knowing that artists don’t like to pick a favorite song it’s like picking their favorite child, I did ask which song would he point to as a calling card to get fans to pick up the album.

“Good Memories, itself, would be a good calling card. Reflecting on the people and the times, you know?”

I then asked the same question regarding “The Greatest Love”.

“I would say, The Greatest Love. The song, itself, is a good example of what’s going now, for me, musically. And, that song, Waves, is a good one. Everything goes in waves, right?”

Speaking of “The Greatest Love”, I asked Marty to tell fans what this album is, from his perspective, and what he hopes they get from it. 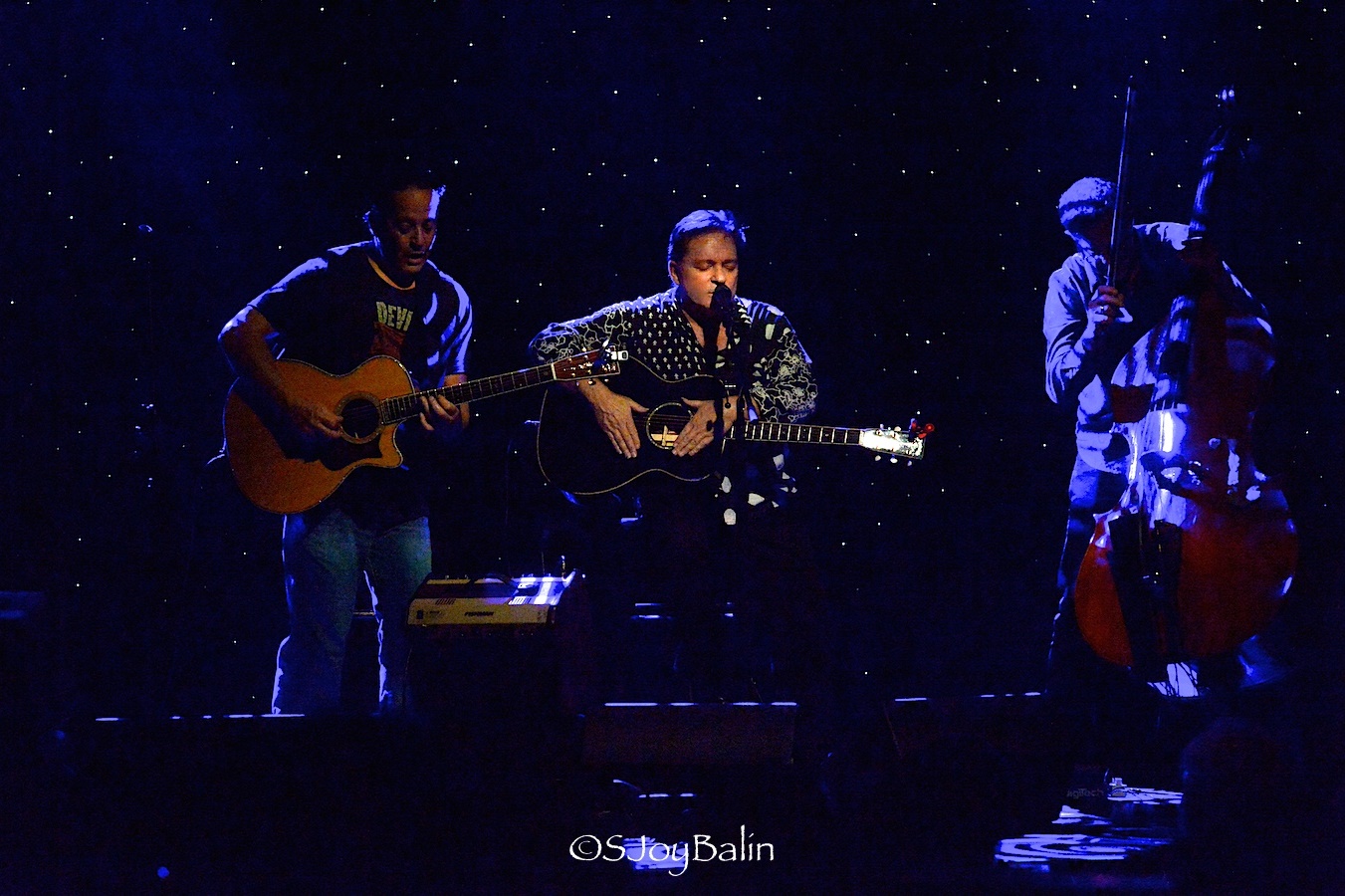 Photo by Joy Balin“I hope that they get the same joy I get out of the songs. The connection I get when I do them live with people is why I put them on the record. The fans wanted to have them on record – or download them – whatever you want to call it. They got the joy out of hearing them live. I get the joy out of doing them that way. The reaction from the audience has been great. It showed me that they accepted the songs. It’s good to get them all down while they’re hot.”

I shifted gears with Balin for just a moment and asked what kind of changes has he seen in the audience in his fifty years of rocking.

“I pretty much get the same kind of reaction in my live shows. There’s nothing like a live show to be at or to perform at. I think that hasn’t changed at all, no matter what’s going on. People still love to be in the presence of a performer and hear the songs fresh. I think that’s a thrill. You get a thrill out of that. You don’t get it anywhere else.”

“I think the most positive change has been the Internet – the way you can spread your music. It’s probably, also, the most negative thing about it. You gotta be careful. I think it works both ways. I think it’s great – all the new ways to get back with people and communicate with the people; get your songs across. There’s a lot more variety to do that with today than it was in the past.

“In the past, you had to work through a company – a promo man and all that stuff; the radio stations – we used to go around to all of the radio stations. I mean, you still have some of that today. Now, it’s a lot easier, I would think.”

His comment begged the question of whether Marty found that these changes make it easier for him to connect with fans these days.

“Yeah! I think it’s much more direct. Instantaneous, in fact, on some of these things, you know? On Facebook, the web – 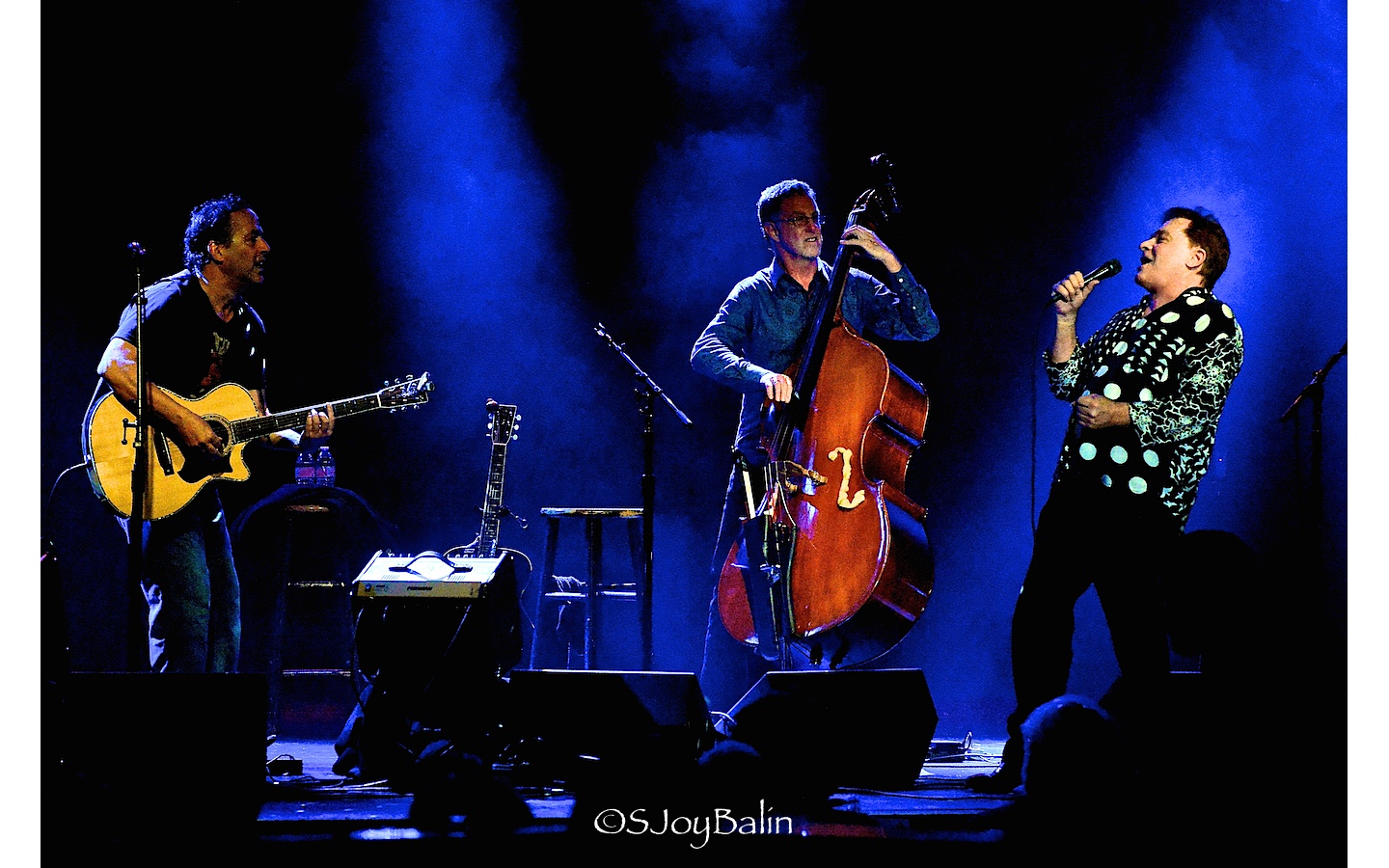 Photo by Joy Balineverything’s right there!”

Switching to the positive and negative changes in the music business, Balin added:

“Well, you know, I don’t know much about the industry as it exists today, to tell you the truth. I’m running now like everyone else is. I use the Internet, talk to fans, and all this stuff about downloads. It’s an all-new world out there but I’m not knocking it because I’m using it. I guess it’s the way of the wave. The way you do things now. Why knock it? They’re still putting out vinyl for us old guys. We still got our stuff out there. You can still go see live shows and still buy a vinyl record, if you want. So, things have changed but they’re still the same.”

A reader/fan wanted me to ask Marty about an early 70’s project that he did called, “Bodacious D.F.” Specifically, he wanted to know if “D.F.” really stood for “dope funk”.

It became our name, Bodacious D.F. That’s how it came about.”

I knew Balin is always asked if there’s any chance of getting Jefferson Starship getting together to do another album. I knew it would annoy him to be asked the question but I knew you readers wanted to know so I asked him.

“No, I don’t think so because Grace doesn’t ever want to sing again and the other guys have their own projects. Hot Tuna’s got Hot Tuna and Paul’s got his Starship . . . .”

“If we all got together, I’d have to be in charge. I can’t do the other people’s way of doing things. I don’t think they want to get together. Why try to do it again, anyway? We’ve been offered millions if we’d come together but nobody’s gonna do it, you know? That’s why everybody’s doing their own thing. They’ve got their own interests that they want to do. Me? I’m into new songs and new music - living some of the old songs but mixing in new stuff. Hot Tuna is doing Hot Tuna stuff and Paul’s doing the same ol’ Starship songs. I’m not into that.

“I like to be running my own show because people call songs out from the audience ‘Yeah! Okay! I’ll do that one!’ I’ll go right into it. I don’t have to wait for people to change guitars or have an instrumental break in every song. I just bam, bam, bam, hit ‘em with the songs. 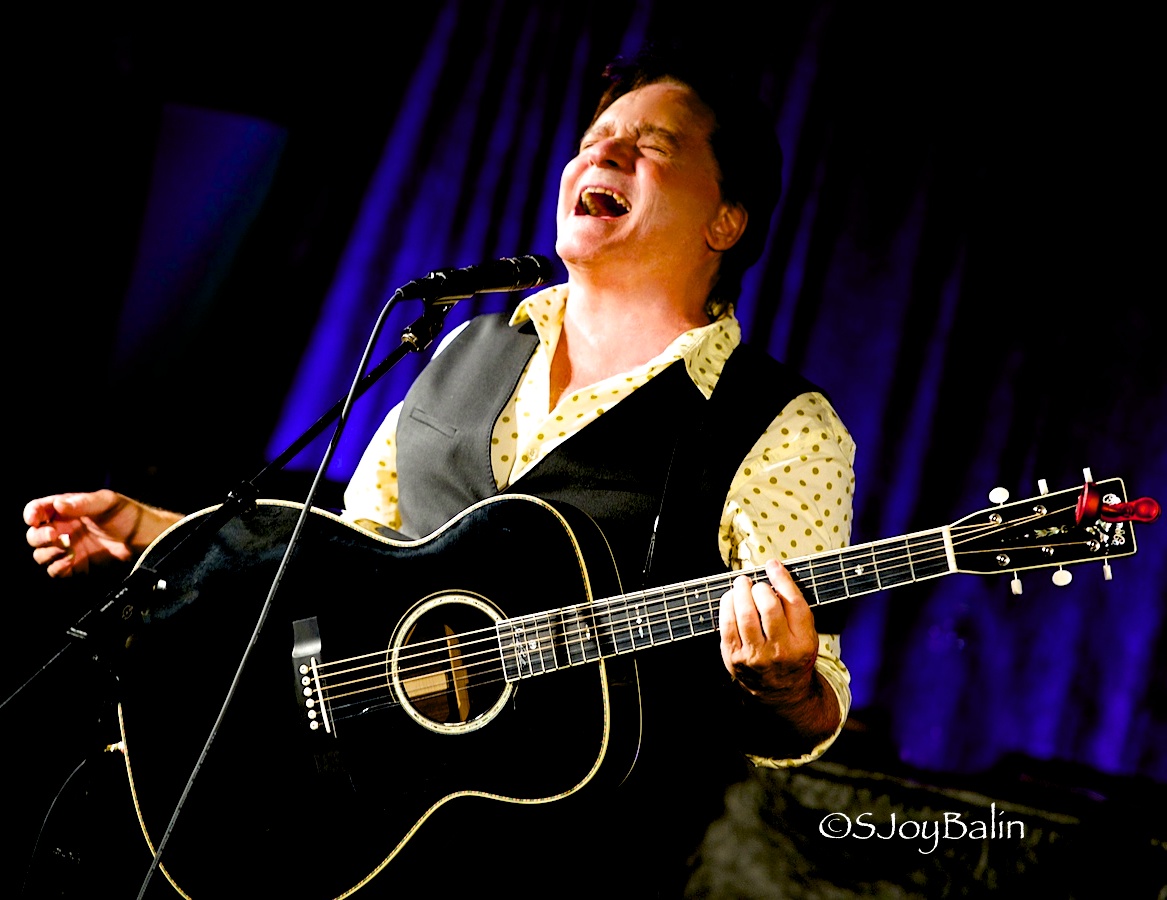 Photo by Joy Balin“People say, ‘Wow! You did thirty something songs in that set!’ Well, gee, when you don’t have an instrumental in every damn song . . . I’ve been doing 2 ½ to 3 hour shows and people ain’t walkin’ out on me because I give them a great variety of tunes – one right after another. I don’t waste time. I’m not losing any audiences by doing a long show.”

Since a Starship reunion isn’t in the works, I asked Marty if there were any particular people he would like to collaborate with.

“There’s many people I’d love to work with. Sure. I’d like to cut an album with Bob James. He’s a great keyboard player. I love his work. People like that. There’s a lot of people I enjoy and would love to work with. But, you know, at the moment, I’m just doin’ me. I’m not looking for anybody to work with. I’m just kinda happy doing my thing, like everybody else.”

As for any new talent that are catching his attention these days, Balin replied:

“Oh, god! Are you kiddin’, man? There are a lot of great stuff out there. I’m amazed. There’s so much good stuff. I’m just happy they’ve got a little niche for me, somewhere.”

In sharing what is on his radar in the next one to five years, Marty said:

“To just be playing. Making a few more albums. I’ve got a few more ideas that I’d like to finish off. Just go out playing like I’m playing. Just enjoy myself like I’ve been doing. Having fun. Keep on writing and see how people like my songs. I’ve not made any major plans except to keep playin’. That’s all.”

“I’m just waiting until both albums are out and then will go out and do a bunch of gigs.” So keep your eye on Marty’s 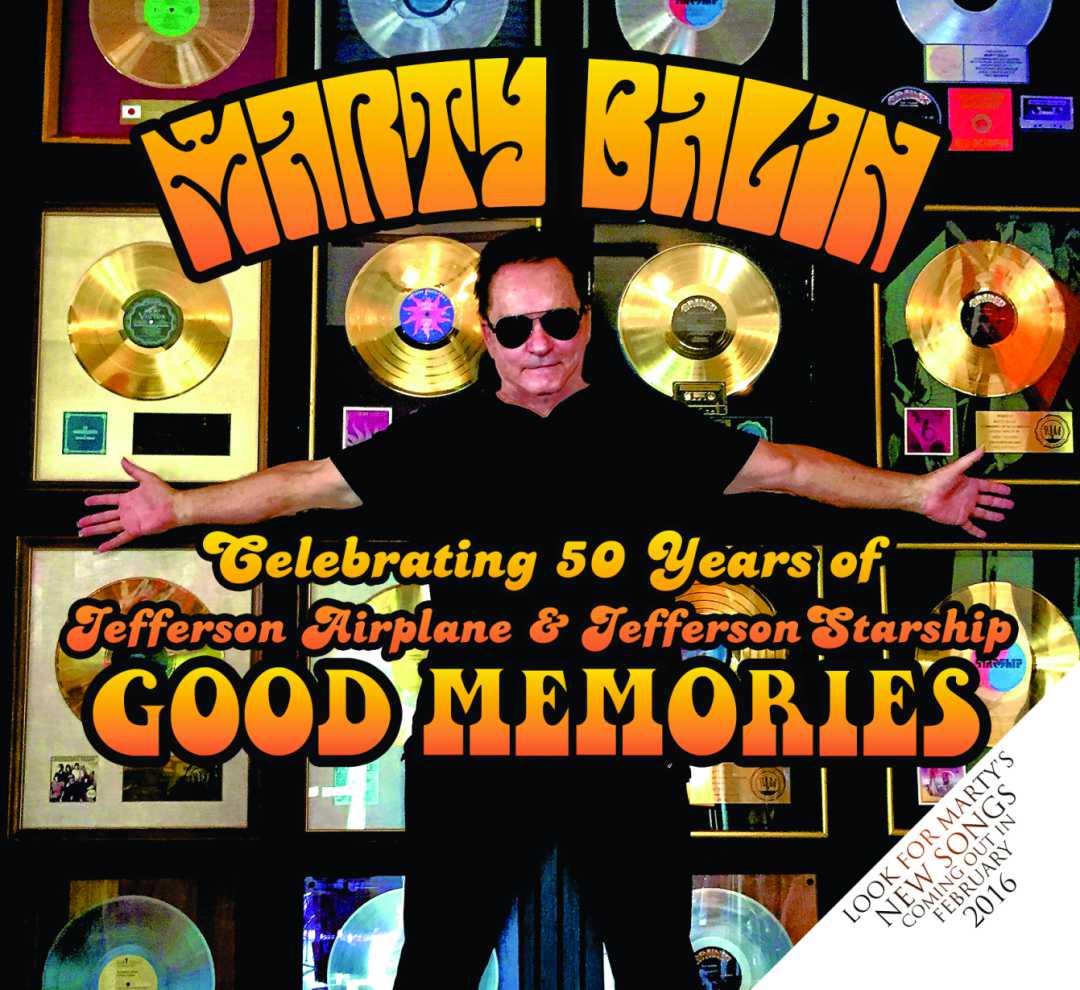 website, MartyBalinMusic.com, to see if he’s going to be performing near you.

Wrapping up our chat, my final question centered on how does he want to be remembered and what does he hope his legacy will be.

“Um, geez, I don’t know. A good artist. One of the great singers. To be remembered like that. A good song writer. That would do me. I’m fine with that,” he concluded with a short chuckle.

Be sure to pick up Marty’s 2 CD full of “Good Memories” this month and his disc of all new songs, “The Greatest Love,” in February.{/mprestriction}