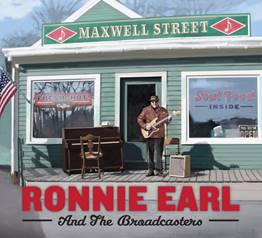 Maxwell Street, the new CD from three-time Blues Music Award winner as “Guitarist of the Year,” Ronnie Earl and his band, the Broadcasters, is a must-have addition to your music collection.

Maxwell Street is named in honor of the late blues pianist and previous member of the Broadcasters, David Maxwell, and is also a nod to Chicago’s famed Maxwell Street, where blues musicians gathered to play outside for the Sunday market crowds.

“This album is dedicated to my big brother David Maxwell,” says Ronnie Earl. “We were born on the same day ten years apart. His playing was as deep as the ocean, as high as the sky and as bright as a quasar. When he passed, I felt a huge loss as I still do. David was a Broadcaster and he and I made a few records together. It was always a supreme honor to play with him. He played blues as well as jazz with incredible expression from Otis Spann to Cecil Taylor. He knew and loved it all. He became Otis Spann in the later years. Our pianist David Limina wrote a tune (“Elegy for a Bluesman”) that captures the feeling of the album and we all send our love and respect to David’s family and all of our love and gratitude for David Maxwell.”

Maxwell Street showcases 10 tracks, including six originals, plus exciting covers of songs by Otis Rush (one of Ronnie’s main musical mentors), “Double Trouble;” Gladys Knight (“I’ve Got to Use My) Imagination;” Eddy Arnold, “You Don’t Know Me;” and the blues/soul chestnut, “As the Years Go Passing By,” which closes the album.

Ronnie and the band performed a special set at the recent Chicago Blues Festival in honor of Otis Rush. In his review of that concert, DownBeat writer Jeff Johnson singled out Ronnie for praise: “Perhaps the most heartfelt expression came from the guitar of Ronnie Earl. His playing was a study in economy, yet electrifying enough to make the hairs on your neck stand on end on the seminal Rush tune, “Double Trouble.”

Ronnie Earl and the Broadcasters are also represented with a track on the new Stony Plain special 3-CD set, 40 Years of Stony Plain, which salutes the label’s four decades of the best in roots, rock, folk, country and blues music. To commemorate Stony Plain’s anniversary, Ronnie Earl recorded this short video about their relationship and is viewable on this page.

“Ronnie Earl is one of the most sensitive, refined and exquisite guitarists on the international blues scene.” - Living Blues.