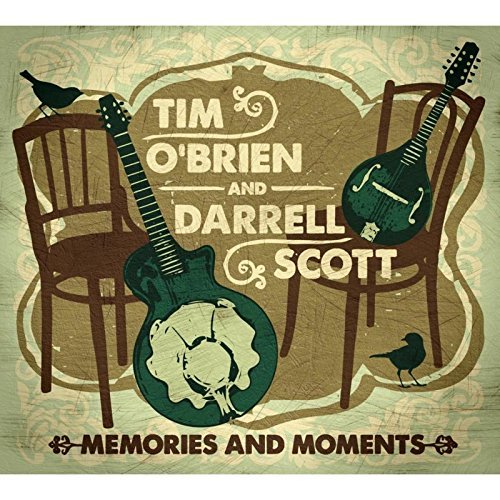 The prayers of roots-music fans will at long last be answered on Sept. 17 with the release of Memories & Moments, the second studio album from highly regarded writer/singer/multi-instrumentalistsTim O’Brien and Darrell Scott, released on their newly formed Full Skies imprint, a compound of O’Brien’s Howdy Skies and Scott’s Full Light labels through Thirty Tigers. Comprising five songs apiece from O’Brien and Scott plus one memorable collaboration in their timely “Turn Your Dirty Lights On,” along with a pair of chestnuts from Hank Williams and George Jones and a spirited rendition of the John Prine classic “Paradise,” with its author guesting on guitar and vocals, Memories & Moments is a face-to-face record by design.

“Our strength is playing in the moment,” says Scott, “so if you record that way, with us across from each other, leaking into each other’s mics, there’s an immediacy to it that translates to the listener. That’s our hope, anyway.”

“We wanted to keep that intimate feeling,” O’Brien adds. “It’s rare that you can play with somebody who can respond and magnify like Darrell does. So except for the one track, this record is just the two of us reacting to one another, and it’s a pretty good game of Ping-Pong. We end up doing stuff that neither of us would do on our own, and that’s pretty cool.”

Back in 2000, the two kindred spirits had joined forces to record the deep and scintillating Real Time, which was widely acclaimed on release and has since become recognized as a towering achievement in Americana annals. Following that album O’Brien and Scott became an in-demand touring act, hitting the road together whenever their schedules allowed. (Performances from shows in 2005 and 2006 were gathered on Live: We’re Usually a Lot Better Than This, released last year on Scott’s Full Light as a way of whetting fans’ appetites for the upcoming studio album.) Over the ensuing years, each has been asked incessantly when their paths would next cross. Indeed, the prospect of a Real Time Redux has come to take on an almost mythic significance in roots-music circles — the down-home equivalent of a Led Zeppelin reunion.

Meanwhile, the two multi-taskers have conducted their parallel careers as solo artists and sidemen, cutting similarly wide swaths across the roots-music landscape. They’ve continued to release solo albums while leading their own bands and lending their talents to world-class musical aggregations — notably including O’Brien’s stint in Mark Knopfler’s touring unit and Scott’s foray with Robert Plant’s Band of Joy — as well as having their songs covered by the likes of the Dixie Chicks, Dierks Bentley, Nickel Creek, Kathy Mattea, Faith Hill, Guy Clark, Sam Bush, Brad Paisley, Sara Evans, Garth Brooks, Patty Loveless, Trace Adkins and Tim McGraw. Along the way, Scott received a pair of Grammy nominations, and his composition “Hank Williams’ Ghost” was honored as the 2007 Americana Song of the Year, while O’Brien’s Fiddler’s Green won a Grammy for Best Traditional Folk Album in 2005.

Clearly, they didn’t need to reunite, and finding the time to join forces again was itself a challenge considering their jam-packed schedules, but through the years each remained acutely aware of the chemical reaction that inevitably took place on those scattered occasions when their paths happened to cross and they made music together.

“We’re good friends,” says O’Brien, “but we don’t see each as often we used to. Since we took a break from solid touring together a few years ago, Darrell has focused in on his own career more, which has been great to watch — he’s turned out an amazing amount of high-quality stuff. And then, it just seemed like a good time to for us to get back together; long overdue, really.”

O’Brien and Scott were already accomplished thirty-something players, record makers and writers when their respective publishers first put them together in the standard Nashville fashion. That initial meeting, which took place in a Music Row writing room near the tail end of the last century, quickly morphed from an arranged collaboration to a “Where have you been all my life?” moment for both artists. O’Brien, who hails from West Virginia, was steeped in bluegrass and country, while Scott, from nearby Kentucky, straddled country and rock ’n’ roll. “Tim and I both felt like we met at Hank Williams,” says Scott, noting that Hank’s music had been a passion of his musician father Wayne Scott, and those seminal records had been the younger Scott’s sacred texts growing up, as they were for O’Brien, along with the bluegrass canon. “Both of us can push the country button and be there,” says Tim of their common ground. “We just stretch toward each other till we intersect.”

After playing together as touring members of Steve Earle’s Bluegrass Dukes, they hit the road on a joint tour, sitting in on each other’s sets and closing the shows as co-frontmen. In each of these situations, as well as in their initial songwriting collaborations (which had immediately yielded “When No One’s Around,” covered by Garth Brooks), their chemistry was palpable, and the nascent partners decided to cut an album together, hoping to capture the in-the-moment spontaneity of an Alan Lomax-style field recording. Recorded live in Scott’s living room, the resulting Real Time was greeted by discerning listeners, critics included, as a stone revelation, containing performances so nuanced, deeply rooted and keenly informed that it was hard to tell where tradition left off and invention came in. In truth, nine of the 13 songs on the record were originals, not traditional tunes — “They just sound that way,” says Scott.

For all those who made Real Time and enduring part of their lives, and who hoped that these two rarefied artists would one day conjure up the magic they’d made together — something Scott describes, with the requisite glint in his eye, as “bigger than the sum of our parts, and our parts are pretty good to begin with” — the long-awaited Memories & Moments will not disappoint, and that’s an understatement.

Recorded in a proper studio this time, the new album took only three days to complete. It’s almost entirely just the two of them, with nary an overdub, fix or comp. Scott, the de facto producer, claims his job was to “kick us in the ass to do this, set dates months in advance, and once we were in there, stay out of the way and let it happen. It’s this funny dance of organic and having some kind of plan, but it leans toward the organic. This record is more about songs and singing than the whiz factor, so there’s not as much fiery soloing on this record; it just never came up. But it will absolutely happen when we play live this fall.

On the level of seamlessly infused tradition, the new album picks up where Real Time left off. “When Tim and I get together, we push each other’s Appalachian roots buttons,” Scott points out. “My Kentucky comes out, and so does his West Virginia. It happens naturally, it’s not a strategy. We know Southern gospel, Jimmy Rodgers and the Carter Family, and not just a little — it’s in our DNA. And when me and Tim sing close harmonies, that brother blend, like we do on Hank’s ‘Alone and Forsaken,’ neither of us is behind the other; we both stand up and deliver.”

Their roots and current concerns come together on the album’s two environmental statements, “Keep Your Dirty Lights On,” which they wrote about the hot-button issue of mountaintop removal by coal companies, and Prine’s “Paradise,” both of which come across with such conviction and authenticity that they seem covered in coal soot.

“As writers and artists, we just witness what’s going on, describe it like journalists and put it in a nice little melodic frame,” O’Brien reflects. “And under the guise of entertainment, it makes people think about what’s happening. That’s the funny thing about music — any kind of art, really: people are entertained and it gets them out of their everyday grind. So you have this wonderful opportunity as an artist to bring something to them. I love that I have this gig, because by labeling yourself a musician and calling people into a venue, you’re making an agreement to do something together, and it’s really a privilege to be in that position. And as such, you want to take responsibility for that privilege — you want to do your best. The audience fuels the work, and it definitely helps to clarify things, because if you stumble upon something as a writer or just select a song that you think will translate, it’s a little nugget of gold to offer them.

Among the nuggets found on Memories & Moments are Scott’s lilting “It All Comes Down to Love,” which seems ancient until he sings, “Trouble is a cat on the freeway/Where the rubber meets the road she’ll find another way,” his achingly poignant title song, O’Brien’s raw-silk rhapsody “Brother Wind” and Darrell’s closing hymn “On Life’s Other Side.” These and other newly penned tunes are primed to be further burnished when these soul brothers bust them out on stage.

“We’re walking out on the edge with this, in a routine way, and that’s part of the exercise: to see what will happen,” O’Brien notes. “It’s like cooking — you add some of this, some of that, see what happens and then maybe adjust it a little bit. The shows and the songs both start that way, and hopefully people will take in and digest it and say, ‘That tasted good.’”

Right after they release Memories & Moments, O’Brien and Scott will spring into action. They’ve set aside a year, starting in late September, “to collaborate, to play this music and to say ‘Hey, we’re still here’ in a concentrated way,” O’Brien explains. It’ll be fascinating to see what these master chefs cook up.