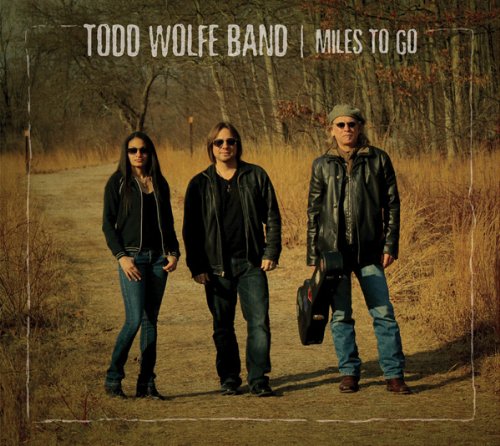 I’m of the opinion that really good, highly talented musicians are often found in three piece bands. It’s in that environment that their talent and their confidence comes shining through. This is certainly the case of the Todd Wolfe Band who is made up of Mr. Wolfe (formerly with Sheryl Crow) on guitar, the lovely and talented Justine Gardner on bass and the ever-steady Roger Voss on drums. Together, they present the latest musical offering entitled Miles To Go.

In Miles To Go, the Todd Wolfe Band puts out the kind of blues that gets Boomerocity to jonesing in the best way. Tight. Solid. This band puts out the tunes in a way many bands their senior don’t always do. This band’s got it!

The disc is ten songs of blues and rock – from the fun sounding Nuthin’ But You to flashback of a song, The Inner Light, this CD is a true delight to listen to. Matter of fact, those are two of the three randomly chosen three tunes that Boomerocity is calling out in this review.

Nuthin’ But You: As previously stated, this is one fun song! This has got to be one that gets the crowds dancing at every TWB show.
Stay With Me Baby: This uber-bluesy tune is one that had Boomerocity slapping the repeat button a whole buncha times. Wow! I love this tune!
The Inner Light: Like I inferred earlier, this one has “flashback” written all over it. If this song doesn’t take you instantly back to the sixties, I don’t know what will.

Miles To Go will make an instant, lifelong fan out of you for the Todd Wolfe Band.