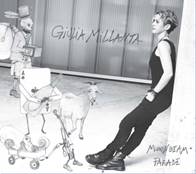 Singer/songwriter/guitarist Giulia (Julia) Millanta announces a September 9 release date for her fifth CD, Moonbeam Parade, on Ugly Cat Music. The new disc features 13 new songs, all written or co-written by Giulia, who also produced the album along with her friend and producer George Reiff.

In addition to her regular upcoming concert shows, Giulia has created a special, unique format for her house concerts, called “Dinner with Giulia,” which she describes as “a night of music and authentic Italian food prepared in your home.” Find out more at www.dinnerwithgiulia.com.

Acclaimed artists in their own right, both Michael Fracasso and Kimmie Rhodes are excited about Giulia Millanta’s talents as a performer and songwriter. “First of all I’m a fan of Giulia’s, exclaims Fracasso. “She appears as a rocker with the voice of a songbird and songs with the insight and edge of a truly gifted artist.” Adds Rhodes: “Giulia’s words are refreshingly real, full of hip concepts and well-turned phrases seated in interesting melodies. Listening to her songs for the first time is like finally finding that great book or being drawn into a movie where you can’t wait to see what’s going to happen next.”

“The best and scariest thing about Giulia Millanta is not just that she is truly a tightrope walker, herself, but that she continually pulls YOU out there with her… with melodies, singing, stories and imagery,” said acclaimed writer and Sirius XM deejay Dave Marsh. “No matter what language her lyrics may be in… and I’ve lost count of how many her lyrics use here… she’s always understandable because her music is, like any fine art, universally recognizable. I can’t wait for her next one!”

As if on cue, Giulia has delivered Moonbeam Parade, an album fueled by a new direction on electric guitar for this highly creative artist. “What sets it apart from my previous works is that I play electric guitar for the first time, and it's on most of the songs,” she states. “And all the tracks were recorded live with the band. I ended up keeping all my vocal takes - but one - and all my guitar takes. Only a very few overdubs were done, which is something I’m very proud of.”

Giulia describes the songs on Moonbeam Parade as being “about getting lost and then finding a way out. It’s about failure and re-birth, not being scared of strong emotions, but learning instead to own and embrace them all.

“There’s a story that develops through these 13 songs, from being in a dark place, to finding a way to transcend pain, through anger, solitude and self-doubt. Collecting the pieces, realizing how our story as humankind is random, and yet there’s a universal thread underneath.”

On an album chock-full of insightful, thought-provoking lyrics, she’s quick to point out a few particular personal favorites. “‘Silvery Gown’ is about embracing and transcending your pain and self-doubt and letting go of your fears. It’s about trust and transformation, about giving your consciousness a chance to learn how to fly; and if you are willing to be brave - and maybe even reckless - you might find yourself crooning and dancing in a silvery gown.

“I wrote ‘There’s a Bridge’ in the middle of the night in a motel room. That day I saw the Grand Canyon and at first I couldn’t understand its grandiosity and mysteriousness. I think my human and limited eyes, soul and mind weren’t able to comprehend its hugeness. But in the middle of the night, its roaring presence woke me up and I started thinking about how little and insignificant we are. And yet, we have the choice and the responsibility to make the best out of this fragment of eternity that’s our lifetime and make it special. (“There’s a bridge, it’s still there, between your life and all the things you never dare to try, close your eyes, baby, close your eyes”). Again, it’s about trust and taking that leap of faith as your only means of transportation.

“First of all, I am not a feminist, but I wrote ‘Eve’s Song’ because I think men can still get away with a lot of things that women can’t. Certain behaviors are too easily excused and justified in men, but are judged as irrational and inappropriate in women. This narrative is about owning up to one’s feelings and standing up for own selves. Eve made a mistake and so did Adam…still he blamed her in front of God. Not cool!

“The song ‘4th & Vodka,’ describes feeling uncomfortable in your own skin and being a misfit; wanting more and not knowing how to get it. Sometimes we feel overwhelmed and at a dead end street, which can lead to making bad choices. But there’s always a dream in your heart and butterflies in your stomach and that will make you keep going.”

Giulia Millanta is a native-born Italian from Florence, who now calls Austin, Texas home. A creative and prolific artist, she has released four prior albums, touring regionally, throughout the USA and internationally. An accomplished guitarist, Giulia also plays ukulele and sings in four languages. She has been described by as being “deeply evocative with a dash of Piaf, a sprinkle of Lady Day, a pinch of Norah Jones and a teaspoon of Madeleine Peyroux” (Michael Greenblatt, Aquarian Weekly).
Giulia began her life in music as a child of eight when her father taught her to play guitar, and she began to perform traditional folk songs. As Giulia became more proficient, she began writing songs and making records. Performing at the Acoustic Guitar Meeting in Sarzana, Italy, in the spring of 2010, her accomplished guitar style and songs earned her the “New Sounds of Acoustic Music” award. This led to an endorsement by the renowned guitar makers Eko, choice of the most famous 1960s-80s era singer-songwriters throughout Italy.

Giulia moved to Austin in 2012, where she was soon embraced by the music community and its fans as a writer, collaborator and performer in the scene’s most prestigious singer-songwriter venues. Giulia, by way of her unique bi-lingual ability and intrepid nature, has honed a style that transcends cultural boundaries and speaks strongly, yet gently, of universal life through her autobiographical musings. One only has to follow the yellow brick road of her discography to know who and where she is now.

In 2008, driven by curiosity and a longing for personal expression, she debuted with Giulia and the Dizzyness (Cavern Jatt Records). Then, in 2011, she released Dropping Down (Ugly Cat Music/Audioglobe), an album distinguished by her maturing skills as a musician, producer, writer and arranger. By 2012, as a result of Giulia’s new energy and inspiration after having toured Europe and moving to Austin to become part of the melting pot of cultural experiences in “the live music capitol of the world,” she released Dust and Desire (Ugly Cat Music/Audioglobe). She continued to soar as a songwriter and artist, and in 2014 broke new ground with The Funambulist (Ugly Cat Music). Surrounded by a host of new friends and fellow musicians as “between the lines,” Giulia conceptualizes the tightrope walk she has been through, writing and singing of all she has experienced, learned and become.

Chris Hillman Talks About The Byrds, Today, and Time Between
248 views
Posted October 2021 If you're a baby boomer, then you already know just certain sounds when they co...