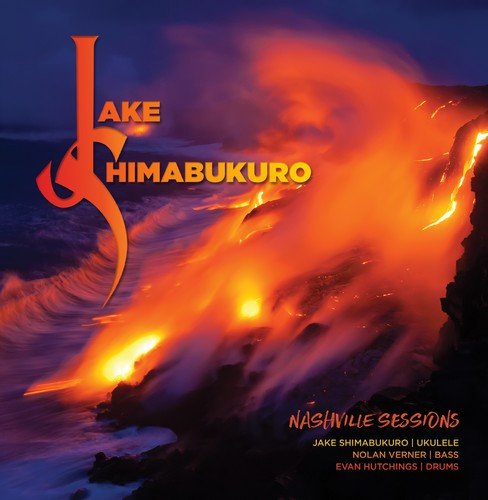 Let me start this review off by saying that for you folks who’ve never really given ukulele music much of a listen, don’t be so quick to blow it off. For baby boomers, visions of Tiny Tim may come to mind (and I’ll leave it up to you to decide if that’s good or bad). A lot of it is really quite innovative and good.

Case in point: Jake Shimabukuro’s new album, Nashville Sessions, is one of the most adventurous, multifaceted and engaging recordings yet from the man whose music has redefined the ukulele for the 21st century. In Shimabukuro’s gifted hands, the age-old Hawaiian instrument has become a medium for previously undreamed of levels of expressiveness and musicianship. And with “Nashville Sessions” he’s reached a new plateau with the instrument. The result is one of the boldest and most unique ukulele records ever made – a new benchmark for the uke.

“We approached the performance like a jazz trio record,” he says, “but with a more progressive rock sound.”

When Shimabukuro entered a Nashville recording studio this past January, he had no idea what was going to happen. At the suggestion of his manager, Van Fletcher, He’d agreed to go in and freestyle some music with two top Nashville session players, bassist Nolan Verner and drummer Evan Hutchings.

At first I was hesitant,” Shimabukuro admits. “’We’re just going to go in and jam? Really? With nothing prepared?’ I never dreamed we would leave the studio six days later with a full album.”

The open-ended creative environment led the uke virtuoso to explore a broader and more multicolored tonal palette than he ever has before. Jake’s ukulele takes on the fist-pumping power of a rock guitar on “Man of Mud.” It evokes the plangent tones of kalimbas and steel drums in “Blue Haiku.” The familiar sound of his Kamaka tenor ukulele is layered with the deeper tones of a fifty-year-old Kamaka baritone ukulele and the angelic, harp-like timbre of the soprano uke on some tracks.

But the true heart of “Nashville Sessions” rests in the creative interplay between three exceptional musicians. Nolan Verner has been Shimabukuro’s live bass player for about a year and a half. “I love playing music with him, Jake says, “and this is our first time collaborating on a recording. Our drummer for the project, Evan Hutchings, is a friend of Nolan’s. They do a lot of Nashville sessions together. The first day in the studio was really the first time I met Evan. But we hit it off from the get-go and the music started flowing immediately.”

The trio’s lively ensemble feel comes to the fore on “6/8,” an open-ended, fusion-flavored jam that moves through multiple moods in the titular time signature. The harmonically adventurous “Tritone” incorporates elements from “Campanella,” a concerto for ukulele and orchestra by composer Byron Yasui that the world first heard when Shimabukuro performed it with the Hawaii Symphony Orchestra in 2015.

Elsewhere on the album, Jake tears up the fretboard on “Kilauea.” His furious, ehco-drenched leads were all laid down in one take, hot from the studio floor. “Kilauea” takes its name from a volcano in Hawai’i, which can be seen on the “Nashville Sessions” cover in a breathtaking phot by Shimabukuro’s friend, Bruce Omori, a well-known volcano photographer from Hilo.

“Nashville Sessions” is also Shimabukuro’s first album of all original songs. Freewheeling studio jams evolved into beautifully realized compositions, such as “Ballad” and “Galloping Seahorses.” The tunes showcase some of Jake’s most lyrical and melodic playing to date, along with his trademark blend of passion and playfulness.

The result is a recording that will touch the heart of Jake Shimabukuro’s fan base while enticing new listeners from all across the musical spectrum.

This is some killer stuff. Seriously.