Queen of My Castle 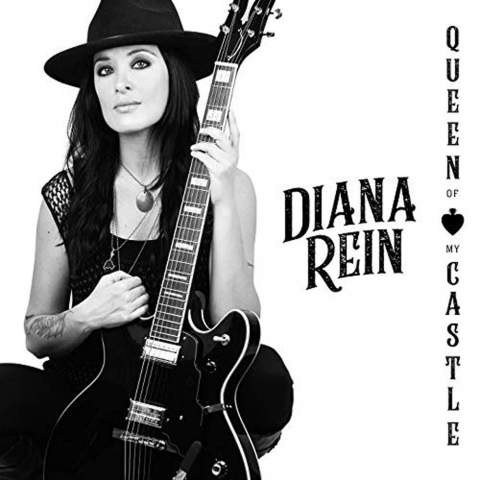 Queen Of My Castle

Diana Rein has released her new studio album, Queen Of My Castle, the follow-up to her 2016 release Long Road. Queen of My Castle was co-produced by Michael Leasure(drummer for the Walter Trout Band) and mixed by Lincoln Clapp (who previously mixed Texas Flood by Stevie Ray Vaughan, one of Diana’s biggest influences). The new album is a collection of fifteen songs, one of which is a tribute to Stevie Ray Vaughan.

The album kicks off with the autobiographical song “Yes I Sing the Blues”that talks about Diana’s introduction to the Blues. She tells her story wIth a modern twist on the blues and plays lead guitar in the Texas Blues vein. Next is “The Midnight Line” which is a raw and scorching number about a clandestine meeting on a train between two people. “We can ride and ride in sin for the rest of our lives...” The title song “Queen of My Castle”is a blues shuffle that gives us some clever lyrics that will empower women with sweet and powerful lead guitar phrases that will perk purist’s ears up. “I Can’t Quit You”is a steady blues groove and progression that gets down and dirty. “I can’t quit you baby, you’re the devil in disguise, you keep me watered but you steal my light.” The song touches on addiction and being lost in someone so much that you just can’t let go.

“One Foot In” laments about a lover being confronted about being unfaithful. A very upbeat blues number, “Walking Along”brings a pep in your step and keeps itself light and non-committal in the nature of the lyrics. The main guitar riff keeps rolling along and lends itself to toe tapping. The song “Pure Soul”gets into more Blues Rock territory and is a love letter to Stevie Ray Vaughan and his legacy. The fiery guitar solo, chock full of fuzz, gives the boost and power that is very appropriate for a song about the mega guitar hero. “It's You”has a groove reminiscent of a moving train on the tracks. It plods along and doesn’t let up. One of only a few songs on the album that are embellished with backing vocals during the chorus which adds a nostalgia of an oldies tune. The latin rhythm added to the blues and 2 tasty solos in the song“My Love”makes this a unique addition to the album.The song “Get Down”is a fun number about letting your hair down and getting lost in the music and the people you are with. It has an interesting pop blues feel that gets you on your feet and features the keyboards and guitar interconnected with a very catchy riff. The guitar solo dances with a funky wah pedal and is a perfect fit.

The album slows down a bit for “Chill of the Night”, a Blues piece in the vein of a torch song. The keyboards get featured in the solo followed by a guitar solo. The vocals are warm and reveal the sadness of missing someone and longing for their love.In the song “Worth”, Diana aims to get women to value who they are and not bow down to anyone at any age. To be strong in your convictions and know that you matter and are worth being respected. “It’s a big man’s world, under lock and key, try to make the climb and keep your sanity....” “Time's Ticking Away”is a positive song about loving and caring about one another. It starts off with a rock feel and is nothing short of inspirational to remember the important things in life. It’s a plea to understand that time is short and we must do our best to be kind while we are here. “Time’s ticking away, let go of all of your pain, let your inner light shine and keep love in your mind.” “Heat”is Blues Rock at its finest with an indelible guitar riff that keeps stomping. The lyrics and vocals are dirty and gritty, same goes with the lead guitar that packs a huge punch. A very anthemic chorus rounds it out to make this song a big winner. The one Instrumental song on the album, “Zoe”, about a lost loved one ends the album on a beautiful note. The melody of the song will embed itself into your soul and stir up heartfelt memories that just won't stay buried.

There’s nothing traditional about Blues artist Diana Rein. Diana’s parents escaped communist Romania in 1981 when she was 3 years old. They arrived in Chicago, on Halloween with only $50 and a dream for a better life. Diana brought her family's strong Romanian work ethic to performing arts school, where her talents flourished, eventually leading her to a role in the classic American 90’s comedy "Home Alone”. Diana's love of Blues started at 8, when her parents brought her to a Chicago Blues Club, arranging to have her perform some songs with the band. This was a defining moment. A blues artist was born. Over the years, Diana's music heroes and influences emerged: SRV, Prince, and Philip Sayce to name a few. But it all started back in Chicago, the home of amazing Blues legends like Buddy Guy. Diana followed her heart to California, where it would be broken repeatedly and made stronger each time. With experience came strength, self-reliance and plenty of songwriting material. At one point when hope was slipping away, Diana promised to make music her life's work and grabbed the reins on her songwriting and guitar playing. Music never stopped knocking and Diana is glad she finally swung the door wide open and let it in. So are her fans. Today Diana calls Southern California home, where she continues to release original music and play what feels good for anyone who will listen. Her promise to her fans is that she will never stop making music and growing as an artist.