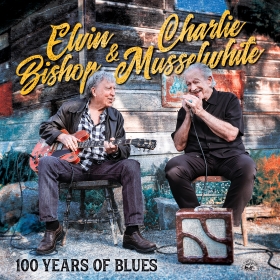 Nothing makes Boomerocity more pogo stick happy than getting a new blues album to listen to. And nothing makes us go hyper on said pogo sick than releases from Elvin Bishop. So imagine the shape of that poor pogo stick after listening to “100 Years of Blues” by Elvin Bishop and Charlie Musselwhite!

No, I ain’t kiddin’ ya! Them boys have gotten together and recorded a great new blues album – one for the record books, I dare say. With 100 years of blues playing between them, they are considered among the elder statesmen of the genre. And though they’ve known each other for over sixty years, this is the first full record that they’ve ever recorded together.

Not unlike the new Bobby Rush CD, ‘Rawer Than Raw”, listening to “100 Years Of Blues” gives us the feeling of sitting around at the crossroads with the Elvin, Charlie, and the boys, listening to them do what they do best: playing what we like to listen to the most: real, hardcore, raw, gritty, dirty blues . . . with the devil walkin’ around, trying to see how these boys are doin’ it.

Try and make us pick a favorite cut from this disc. It won’t happen ‘cause they’re all great.

Yeah, this thang is that good.

However, if Boomerocity were to pick one tune as a calling card for the rest of the album, then we think it would have to be “West Helena Blues”. It’s just good ol’ fashion blues the way it’s supposed to be played. However, the whole durn album is worth multiple slaps of the ‘Repeat” button on your player.

Buy “100 Years Of Blues”. In fact, by several copies because you’re going to want to give it as a gift to the blues lovin’ friends.