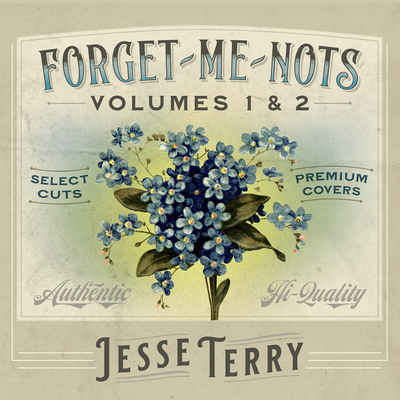 Boomerocity is proud to exclusively premiere the new music video by Jesse Terry of the Bob Dylan classic tune, "My Backpages" from his new album he will be releasing.

Terry shared about selecting this particular song. "I loved the process of choosing the songs for this album - With Dylan, there's going to be a hundred songs you'd love to cover, so at the end of the day I chose the song that stuck with me the most. I was lucky to have a few months to live with the song choices, so I learned about twenty Dylan songs, before ultimately deciding on "My Back Pages." It just slays me, the way this searing lyric just jumps out of this composition. The lyric is so alive & evocative, while still rolling off the tongue. This is just classic Dylan for me, with untouchable lyrics, a great melody & a brilliant hook that sneaks up on you. Dylan could bring poetry into a sing-along so effortlessly."

It's a double album of covers titled, Forget-Me-Nots: Volumes 1 & 2, and will be released February of next year. Taking a very non-traditional release approach, tracks will be divided into the decades/eras they were originally released and put out as EPs leading up to the full album release. The Dawn of Radio EP, consisting of tracks from the 1920’s to the 1950’s, comes out today. Also, the full album is being made available to people who sign up to Terry’s newly launched Patreon page.

“It was a long process narrowing down the initial list of hundreds of songs to record,” said Terry. “Some of them were requests I received from viewers watching my weekly on-line pandemic shows. Others were songs that my parents introduced to me, or that I sang in my high school and college bands. The most important requirement in choosing a song was that I would never tire of singing it.”

This is the second album Terry recorded during the pandemic, along with his upcoming holiday record Peace, both of which were executive produced by longtime fans/friends, Rick and Marianne Chester.

“Having their support to make this music was the greatest gift for my family and myself,” Terry said. “They gave us a special opportunity to record timeless, beautiful music during a dark and isolated time. It’s something that I’ll never forget and something I’ll always be grateful for.”

Similar to the release, the recording process was also very non-traditional. Vocals and acoustic guitar were recorded at an Air BNB in Prosperity, SC, which the Terry’s booked to escape the New England winter, under the direction of longtime producer Neilson Hubbard (Mary Gauthier, Glen Phillips). The rest of the album was recorded in Nashville which Jesse was able to take part in via Zoom from his home in Connecticut.

“In March of 2021, with the pandemic still raging, my family & I drove down to a tiny town in South Carolina and set up a recording studio in the basement bunkhouse of a house on Lake Murray,” Terry explained. “We spent six unforgettable weeks there, recording the foundations of these twenty-two tracks. In the mornings, we kayaked and searched for anole lizards before I started recording. If I finished recording early enough, we’d light campfires & lie on our backs in the yard, pointing out different constellations to Lily. It was a magical time.”

These albums come on the heels of the overwhelmingly positive response to When We Wander, Jesse’s seventh album that was released in May of 2021, and the first album of songs he wrote since becoming a parent. Critical acclaim from the likes of American Songwriter Magazine has rolled in, writing, “When We Wander is not only a personal milestone for the artist but a pivotal moment in his journey as a career musician;” while Red Guitar Music wrote, “Jesse Terry has made a record that is exquisitely played, sincerely felt and sonically beautiful. [He has] made the kind of record that thousands of singer-songwriters dream of making.”

You can keep up with the latest with Jesse Terry by visiting his website, www.jesseterrymusic.com.