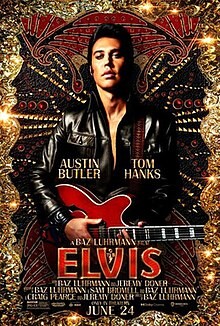 Two things before I share my objective thoughts on the Elvis movie:

First, if you’re new to Boomerocity, I will let you know right up from that I’ve been an Elvis fan since I was old enough to recognize music. My parents raised me on his music. The first movies I saw in a theater or drive-in were Elvis movies. My first records were my mom’s Elvis 45s that she bought as a teenager in rural East Tennessee. The first concert I attended was Elvis (Easter Sunday, April 22nd, 1973, Phoenix, Arizona). I was 13 years old. I met Colonel Parker quite by chance before the concert and asked him a few questions. I say that he was my first celebrity “interview”, and you can read it and see my original handwritten school report here. Over the years, I’ve met several who knew and/or worked with Elvis. After launching Boomerocity, I’ve interviewed some of them (Jerry Scheff (“on the Fender bass”); legendary guitarist, James Burton; and backup vocalist, Donnie Sumner.

Second, if you are somewhat of Elvis fan or are not old enough to know what all the fuss was about him, this movie is thoroughly entertaining. If you are a hard-core Elvis fan and “purist” (I place myself somewhere in the middle of this group) then some of you will take issue with some of the content in the movie or the infinite number of facts and/or events not covered in the movie. However, keep in mind even though the movie is a butt-numbing two hours and thirty-nine minutes long, that wouldn’t be enough time to cram in all that we feel should’ve been in the movie.

That all said, to both groups, I would encourage you to see the movie for, at the very least, the entertainment value.

Now, for my thoughts about the movie (for whatever they are worth and in no particular order).

I’ve seen the movie twice, two nights in a row. I went the first night without having read any reviews of it. That was intentional. I wanted view the film against the backdrop of what I thought as a fan and what I thought I knew or remembered about the life of Elvis.

The “Feel” of the Movie
One thing that hit me quick was that I felt the movie and the same quirky, surreal vibe that the movie, Moulin Rouge! has. It wasn’t until after my first viewing of the movie that I learned that Baz Luhrman directed both movies. I’m not sure how that decision was made and not sure that I would’ve made it if I was the one making such decisions. But I’m not and someone else did so this is what we have. Not a terrible thing. It's just not what I would think Elvis would’ve done.

The Colonel
The movie is, oddly enough, from Colonel Parker’s perspective. I’m not sure that it’s portrayed entirely accurately but it is interesting. Despite my aforementioned “interview” with the Colonel, I can’t say that I have much insight into the man. All I know is from what I’ve read about him and have heard others say about him. With that as my only backdrop for an opinion, I would say that it would be a tad hard to cast the Colonel in a positive light.

In a 2019 interview with the Colonel’s widow (here), she said about the movie and Tom Hank’s future portrayal of her late husband, “I would like to see that clarified. I’d like to see the truth there. I have great faith in Tom Hanks’ sincerity and his integrity. I just pray that he wouldn’t do anything less than the truth.”

Austin Butler’s Portrayal of Elvis
Elvis was one of a kind. As singer and music historian, Billy Vera, said in my 2015 interview with him (here), “Nobody equals Elvis because he had more going for him than the others. He was as handsome as a Greek god, so he had that sex thing going with the girls.”

Even so, Butler looks quite a bit (but not even close to exactly) like Elvis. However, Elvis’ moves (both as the “young” Elvis as well as the Elvis of the 70’s)? He nails it and impressively so. He also does the singing of the young Elvis (actual Elvis recordings were used for the later Elvis). The quality of Austin’s Elvis dialog is impressive from beginning to end.

Costumes
Presley was known for his flamboyant clothing – both off and on stage. There are books and websites dedicated to the clothing Elvis wore (ElvisConcerts.com being the best, in my humble opinion). If you do a "stare and compare" between what we know Elvis wore and those shown in the movie, one might think that the Presley estate loaned the production crew the actual jumpsuits but I’m doubting it. Kudos to the film team for their high level of accuracy in reproducing those outfits.

Graceland
I’ve visited Graceland twice and I have a pretty good recollection of the layout of the mansion. I’ve also seen a diagram of the layout of the estate and pictures of the areas of the home (click here to visit one site that gives you a glimpse) that are off-limits to the public. When the movie shows scenes from within the mansion, I thought they were filmed within Graceland. They were not. The entire movie was filmed in Australia. So, again, kudos to the set designers for their high level of accuracy in re-creating the fabled Presley mansion.

Back To The Colonel
The movie repeatedly drives home two things about the Colonel: 1) his “Netherlands” accent that Tom Hanks presents; and 2) the allegation that Parker received 50% of Elvis’ earnings. Here are two links (here and here) to interviews with Colonel Parker. Both show consistency of whatever accent he had. You decide whether Hanks is accurate in his portrayal of Parker’s voice. In the second video, the Colonel is asked about the percentages he received from Elvis as part of their partnership. Compare what he says to what the movie said it was. Draw your own conclusions.

Watch the movie and decide for yourself if you feel that the Colonel was fairly and accurately portrayed in the movie and Tom Hanks honored Mrs. Parker's wishes.

Chronology and Accuracy of Events
This is where I feel the movie will possibly lose die-hard Presley purists. Some of this is the result of having to cram a fabled life into a 2 ½+ hour movie. Still, some things were focused on though distorted out of sync to chronologies. That’s all that I’ll say about that. You’ll see for yourself. But does it harm the entertainment value of the movie and the memory of the legend? I don’t really think so.

Elvis and Priscilla
While the movie does make it clear that Priscilla and Elvis met while he was stationed in Germany during his two-year stint in the Army, it glides over the fact that she was a tad underaged – both in Germany and when she moved to Graceland prior to their marriage. It’s one of those inconvenient truths that we Elvis fans don’t like to acknowledge and, apparently, neither did Baz Luhrman. There was no attempt to spin it. It wasn’t addressed at all.

Elvis’ Death
Presley’s drug use is well known and documented. Just not in the movie. Yes, it shows that he “partook,” but there was more made of the brutal touring regimen that he was under than the drug use. The movie doesn’t re-enact the death of Presley, it shows the various announcements of it. It shows the footage we’ve all seen of the funeral procession and such.

What would’ve been moving would have been a series of scenes in the movie such as: Lisa Marie as a toddler not realizing her father passed away upstairs; the heart-rendering grief that Elvis’ dad, Vernon, expressed when he learned of his son’s death; the funeral service and the songs sung at his funeral; the scene at the mausoleum in which Elvis was originally interred.

There was no mention of Vernon firing the bodyguards – especially Red and Sonny West and their devastating book, “Elvis: What Happened?” that first spilled the beans on the King’s drug use shortly before his death.

Insights into these things would have, in my opinion as a fan, made the movie much more insightful and endeared itself more strongly with Elvis’s fans.

Still, the movie is very good. I’ve watched it twice and I’ll likely go see it again. I’ll even buy the DVD when it comes out. I’d encourage you to see the movie. Why? To be entertained and to get a taste of the music, mayhem, and mystique that was Elvis Aaron Presley.