Velvet Kiss, Lick of The Lime 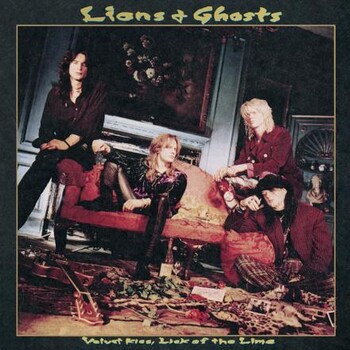 Once upon a time (mid to late 80’s) – back when the music industry began a transition from which it didn’t return – there was a band called “Banner” that was made up of Todd Hoffman, Michael Lockwood, Michael Murphy, and Rick Parker. Later changing their name to Lions & Ghosts, they were heavily influenced by The Beatles, T. Rex, glam rockers, and even The Byrds. They mixed those influences with a heavy dose of psychedelic sound which is readily evident in their first album, “Velvet Kiss, Lick of The Lime.” More about that album in a moment.

L&G enjoyed a loyal, cult-like following in Southern California, evening serving as the opening act for acts like Guns N’ Roses, The Alarm, The Church, Love and Rockets, and many more. Naturally, this led to a demand for an album of their own original music that the crowds loved.

The band spent several months recording their debut record at Tony Visconti’s Good Earth Studios in the Soho district of London in the first part of 1987 and even benefitted from Visconti’s role as producer and engineer. Enjoying regional success with the album, they recorded Wild Garden in 1989 and, sadly, called it quits not too long after, leaving fans brokenhearted.

Velvet Kiss, Lick of The Lime is being released in digital format for the first time. It includes bonus tracks that weren’t included in the original release and includes “Gurl I Luv You,” their first new song in over thirty years. The collection is released on the Deko Entertainment label.

The re-release sounds as fresh as “Gurl,” and is well worth listening to. You can access it by clicking here. Definitely check it out and, if you’re from SoCal, enjoy the memories the music will bring back.