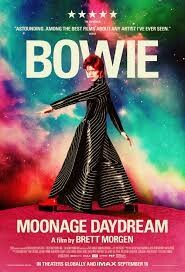 I went to see Moonage Daydream not really knowing what to expect. I purposely avoided reading any pre-publicity about the movie except for the trailers that preceded its release (like the one shown on this page).

What I experienced was a bombardment of sight, sound, history, and memory regarding select segments about David Bowie’s life. I’ll explain why I said, “select segments” in a moment.

As I sat alone in a mostly empty theater as I was taking in the audio/visual bombardment that was Bowie’s life (I was able to catch one of the first showings on opening day – though I missed the first few minutes of it due to slow box office check in). As I did, I wrote down words and phrases that came to mind as I watched. The words are:

Colorful – When you see the movie, you’ll know what I mean.
Chaos – Bowie uses this word frequently and the movie projects that feeling.
Fragmented in a beautifully artistic way – The movie is not in any chronological order and seems fragmented . . . but you can easily follow it if you pay attention.
Uncomfortable – Bowie’s creative genius always presented new, boundary crossing art and to hear it and see it could often make one feel a bit uncomfortable. Watching this moving reminds us of that.
Mind-bending – As Bowie presented his reality and his view of the future, it influenced how we saw both.
Boundary pushing – once you experienced Bowie in any way, your emotional and mental boundaries were redrawn.
Psychotic – Bowie often analyzed his mental health, likely due to the mental issues that his older brother faced.
Isolated – When one pushes the boundaries, it often results in a feeling of isolation, even when the result is acceptance and adulation.
Weird – Do I really need to ‘splain this one?
Thought-provoking – To watch and listen to David Bowie means that you subject your frame of reference to the possibilities of changing your views and opinions on a matter.
Otherworldly – Two words: Space Oddity.
Art film – Moonage Daydream is part art film, part Dark Side of the Moon, and part Moulin Rouge.
Ever changing – If Bowie started to feel comfortable with what he was creating, he usually shifted gears.
Aleister Crowley – Images of the infamous occultist seemed to equal in count to those of Angela Bowie. But I digress. It is known that, like several of David’s peers in the rock and roll community, Crowley was of interest – if not an influence.

David Bowie was an anomaly in the world of rock and roll. Sure, we had Alice Cooper, Kiss, and other musical oddities, but Bowie was orders of magnitude above and beyond them. While Cooper and Kiss are great in their own right, Bowie’s career was one of constant change and boundary-pushing. Director Brett Morgen did a very good job conveying that in his film.

As great as he did in showing those aspects of Bowie’s career, there are some glaring omissions from the movie. While the movie rightly and glowingly highlighted the rocker’s marriage to Iman (David’s wife at the end of his life), there were only a couple of photos briefly flashed of his first wife, Angela. In the spirit of full disclosure, I must mention that Angela is a friend of mine. However, that shouldn’t prevent me from accurately calling out the fact that Angela played an important role in helping David getting his career launched and his image crafted. She helped in the design and creation of his stage wardrobe. Their marriage was both a marriage of convenience and known as being quite open. In fact, both of those facts were part of the publicity that helped create David Bowie’s mystique.

Their son, Duncan “Zowie” Bowie, wasn’t shown or mentioned, either. I remember as a fan in the seventies that Zowie was often mentioned in articles and interviews about and with the Bowies. Why not in Moonage Daydream?

Minor? I suppose that it depends on how thorough and detailed you wish a biopic/documentary to be. In my case, I loved the movie and will likely see it again. I do wish, though, that they acknowledged Angela’s contributions a bit more than just a couple of photos and that Duncan/Zowie had been mentioned.

Again, I loved the movie and highly recommend seeing it . . . and bring a friend.