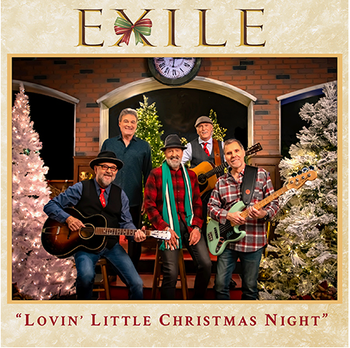 Exclusive Premiere on AIM TV and to be featured on CMT.com and Heartland’s 12 Days of Christmas

Legendary pop/country crossover band Exile have released a music video in support of their new holiday single, “Lovin’ Little Christmas Night.” The new video was exclusively premiered on AIM TV and will be featured on CMT.com and Heartland’s 12 Days of Christmas among many other popular platforms. Watch the new video on this page.

"We think the video captures the essence of the song - the joys of of a wonderful Christmas season with loved ones," expressed Exile.

“What a joy it was to create this Christmas music video for Exile! To work with such talented musicians and writers such as these guys, makes my job such a treat,” added Greyhouse Films Prod/Dir/DP-Curtis Graham. “The passion they have for their music is so evident as they are a one- of-a-kind band, it’s intoxicating! Hats off to JP, Sonny, Les, Marlon, and Steve for bringing musical joy to this Christmas Season!”

The recently released new holiday single, “Lovin’ Little Christmas Night,” is a cheerful seasonal tune co-written by JP Pennington, Sonny LeMaire and Sharon Vaughn, and is certain to fill listeners’ heads with visions of joyful Christmas scenes as it is somewhat nostalgic! It evokes the joys of Christmas decorations, shimmering lights and strolling arm and arm with the one you love to the town square and the promise of a beautiful night by the warmth of a fireplace!

Exile will reach a major milestone in 2023 marking their 60th year together, making them the longest running American self-contained band. With eleven number one songs, three Gold Albums and eight million records sold, Exile continues to tour, create new music and has big plans for the upcoming year.

The healthy camaraderie that has held the hit-making band together all these years remains intact as they continue to write, record and tour, thrilling audiences with new music and fan favorites. “Lovin’ Little Christmas Night” was produced by Exile members JP Pennington and Sonny LeMaire with tracking on the project engineered by Tony Cottrill at Lonely Dog Productions in Nashville, TN and Jeff Myers at Tower Station Studios in Lexington, KY. The new tune was mixed by Paul Shoulten at County Q Productions in Nashville, TN.

About Exile:
Exile formed in 1963 looking to play small clubs in Richmond, Kentucky, but managed to top both the pop and country charts during their nearly 60-year-long career. Their most successful hit, “Kiss You All Over” spent four weeks at the top of Billboard’s pop chart in 1978. In the early 1980’s Exile started to focus on country music. During their run on the country charts Exile has successfully had ten No. 1 singles including “I Don’t Want To Be A Memory” and “Give Me One More Chance.” The hit song "Kiss You All Over" was used in the 1996 Adam Sandler movie Happy Gilmore and in the 2006 film Employee of the Month. They have toured with acts including Aerosmith, Fleetwood Mac, The Oak Ridge Boys, Kenny Rogers and The Judds. The 5 original Exile members re-formed in 2008 and continue to tour today. Current members of the band include J.P. Pennington, Les Taylor, Sonny LeMaire, Marlon Hargis and Steve Goetzman. 2023  will celebrate 60 years for the band and the 45th anniversary of the hit song “Kiss You All Over.”