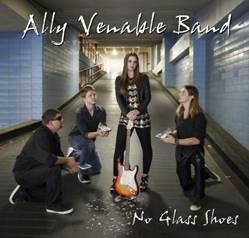 Boomerocity LOVES finding and promoting young, new talent. Such is the case of 17-year-old blues singer/guitarist Ally Venable and her debut CD, No Glass Shoes.

“I think No Glass Shoes really shows the musicianship of my band as well as the guest artists that performed on this album,” Ally says about the new disc. “The songs on this CD really mesh well together and correspond differently in their own way. My goal for this album is to really connect with people and to let them know it’s okay to feel a certain way. I really cannot express enough gratitude to everyone that contributed to making this album possible.”

Ally Venable wrote all of the songs on No Glass Shoes, with the exception of the Junior Wells classic, “Messin’ with the Kid,” and the Bonnie Raitt hit, “Love Me Like a Man,” written by Chris Smither. Ally also composed new music to go with the lyrics of the Alberta Hunter chestnut, “Downhearted Blues.”

Houston-based Ally Venable and her band have been racking up critical accolades, including winning the East Texas Music Award last year for Blues Band and Ally for Female Guitarist of the Year. She also placed in the Top 10 of the under 20 years-old category at the 2015 and 2016 Dallas International Guitar Festivals.

As leader of the powerhouse Ally Venable Band, she’s ignited tremendous excitement for her musicianship and live performances on the local Houston music scene, with touring now expanded into the southwest region. Ally Venable started singing at an early age in church and in recent years picked up the guitar and found her true passion.

She was also voted the 2014 and 2015 East Texas Female Guitarist of the Year. Each of Ally’s bandmates excels on their respective instruments, too. Lead guitarist and keyboards player Bobby Wallace is a master at his craft and his years of experience enhance the band. Bassist Zach Terry brings his passion and energetic flair to every show. He also won the 2015 East Texas Bassist of the Year at the Music Awards. Self-taught drummer Elijah Owings brings a steady and dynamic sound to the band. He is the backbone of the Aly Venable Band’s rockin’ blues sound.

Jim McCarty Talks About His Latest Book and the Yardbirds
401 views
If you're a baby boomer and have been deep at all into rock and roll music and the h...

Andy Timmons (2010)
Bobby Rush Talks About Life, The Blues and His Grammy