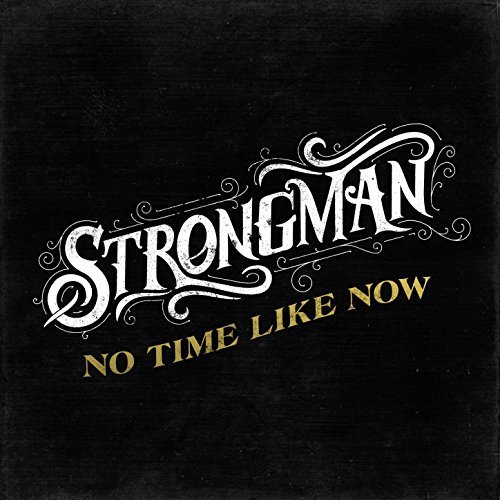 No Time Like Now is the new CD from award-winning Canadian blues-rock guitarist Steve Strongman. Special guest on the new disc is legendary guitar player and long-time friend Randy Bachman, who joins Strongman on a searing version of the Bachman-Turner Overdrive classic, “You Ain’t Seen Nothing Yet.”

With No Time Like Now, one of Canada’s most talented and compelling blues players becomes a juggernaut. Backed by an impressive pack of players (including drummers Dave King and Adam Warner, bassists Rob Szabo (who also produced) and Alec Fraser, keyboardist Jesse O’Brien), the band is pure fire — both athletically limber and wickedly tight. No Time Like Now buzzes with fresh energy — loose, playful and reinvigorated — but it’s thanks to the caliber and chemistry of the players that it lands its punches so consistently.

“I think every artist owes it to themselves to continue to grow and explore new ground, while still holding onto the thing that made them want to play in the first place,” says Steve Strongman about No Time Like Now. “This album does that for me, it's exciting and honest.”

Modern and timeless, Strongman’s No Time Like Now is a slab of reinvigorated 21st century blues. An intoxicating shot of raw electrified blues, the album captures the performer riding a surge of new energy. The album is a shout-out to a lifelong love of the genre in all its shapes and shadings, from rough-hewn electric blues, blue-collar hollers and swampy stompers to soulful groovers and hushed, heartfelt ballads. More than anything, the album reconnects with the primal force and emotional clout of dirty blues. It’s a stunning rocker, and it’s a hell of a lot of fun.

Strongman recalls, “After the success of A Natural Fact and Let Me Prove it To You, I was left thinking, ‘What now?’ I felt like Rob Szabo and I had made fantastic records and I was very proud of them, so when I approached Rob about producing a third recording for me, he would ask me, ‘What kind of record do you want to make?’

“That sentiment kept getting reinforced throughout the writing and recording process, as a great producer does. Rob would make me dig deeper into what I wanted to write about and keep the focus on the songs.  I had several songs that were very strong but didn’t fit our mandate of making a strong guitar-driven record. In the end we had to re-work material so it fit the vision we had for the record.”

Strongman is a versatile talent, and a restless one, who, by constantly pushing himself in new directions, has kept his music vital. His talent is huge and impossible to miss, and it’s matched by his staggering musical ambition — as guitar-slinger, songwriter or vocalist. The same structures and progressions that animate blues and roots music can also choke the air out of it, smothering it in caricature and cliché. But Strongman is a subtle shape-shifter who manages to slip that trap without betraying the music he loves. Throughout, he never sounds an inauthentic note or loses touch with the essence of the blues. In the tradition of The Howlin’ Wolf Album and Muddy Waters’ After the Rain, No Time Like Now offers tribute to blues-rock as a full-blooded, living thing, not a museum piece.

A true master of guitar tones, Strongman is at his best with the beautiful sounds he presents on the new disc. “This record has some nasty guitar tones on it,” he admits. “I feel it’s the theme that shapes the sound of the record: the guitar tones. We recorded all the guitars in a makeshift amp room in my basement. Rather than spending lots of money at a larger studio, we opted to spend that money on renting gear and spend more time on sounds and feel.  Once we had a tone that we liked, we would go and reference it to some old Billy Gibbons ZZ Top tones that I loved, and start tweaking from there. We went with the ‘small amp/big sound’ philosophy, which was us pushing low-wattage tube amps ‘til they shook.”

The album’s chugging title track is an anthem to making the most of the moment, a sentiment that flows through the rest of the album. But that urgency never displaces musical mastery, and No Time Like Now doesn’t disappoint on that count. From the skittering swamp rock of “Money in the Bank” to the rollicking, gospel-tinged “Love, Love, Love”, through the strutting soul of “I’m A Man” (an original tip of the pick to one of his favorites, “Mannish Boy” by Muddy Waters), the swaggering stomp of “Old School” and simmering scrapyard blues of “Good Times” to the nakedly reflective ballad, “The Day They Carry Me Away,” the album finds Strongman and longtime collaborator Rob Szabo delivering the goods in every way.

Steve Strongman’s impressive resume includes stints opening for guitar legends such as Johnny Winter, B.B. King and Buddy Guy. The performer’s breakthrough 2012 release A Natural Fact was hailed as a standout, earning Maple Blues Awards for Recording, Songwriter, and Guitarist Of The Year as well as a 2013 Juno Award (Canada’s Grammy) for Blues Recording Of The Year. In 2014, he was thrice-nominated at the Maple Blues Awards (Guitar Player, Electric Act, and Entertainer of the Year) and in 2015 received a second Juno nod for Blues Album of the Year (for Let Me Prove It To You).