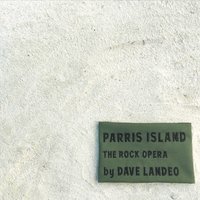 Boomerocity discovered an incredible regional talent last night at a Knoxville area venue. His name is Dave Landeo and he and his band are consummate entertainers. They really, truly are!  He and the guys had pretty much one hundred percent engagement and participation of the crowd (no easy task ,for sure).

Dave’s bread and butter is performing as a cover band (and a darn good one, at that!) but he also writes, records, and performs his own compositions. And, as luck would have it, Landeo has a new CD coming out entitled, “Parris Island – The Rock Opera.”

Dave said of the new CD, “The idea of putting together a "rock opera" about Marine Corps boot camp came to me as I was compiling a set list of covers and originals for a Toys For Tots (the Marine Corps Reserve philanthropy) benefit in Knoxville, TN in the '90's. That show I played 4 songs I'd written specifically for the occasion. Several years later I added more songs to the project and ended up with 17 tunes...which my band performed at our annual Christmas Benefit in '05. Only one of those songs was recorded in a studio for a CD or mine. With the encouragement of my musician friends, I finished the album in '16 and here it is! Wah Lah!....or should I say Hoo Rah!!”

Original. Raw. Intricate. Good. Very good. So, if you want some truly great music that you can’t find just anywhere, click on over to DaveLandeo.com and purchase “Parris Island – The Rock Opera”.  While you’re there, why don’t you pick up one or all of his other work. You may as well because you’re going to become a life-long fan and will want his entire catalog of work.