Pearl: The Obsessions and Passions of Janis Joplin 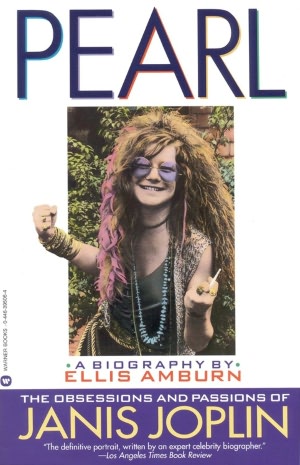 Ellis Amburn’s “Pearl: The Obsessions and Passions of Janis Joplin” is as much a textbook on human need, self-perception and interpersonal relationships as it is a biographer on iconic 60’s rock star, Janis Joplin. This book comes as close to providing a very clear and insightful look into the life of the legend as any I’ve read. It’s unlikely that you will ever find a more researched and objective book on her life than this one. By his own account, he traveled over 30,000 miles to personally interview family and friends to former band members, lovers and even hotel managers.

Amburn peels back the layers of legend, hype and hearsay and gets to the upbringing and true events that made Janis Joplin into the kind of person she was. He details his visits to her home town of Port Arthur, Texas, and the classmates that she went to school with. He reveals the harsh treatments she experienced by friends and family alike that had to have broken her heart in to countless pieces.

Ellis also exhaustively interviewed the many likes and loves of Janis’s short life and goes into detail of her infamous attendance of her high school reunion. What is especially amazing about Amburn’s research is that he was able to track many of the men and women that Janis had relationships with. Some may feel that the author is indulging in his prurient voyeurism but that is not the case at all. To learn about Janis Joplin is to learn about her trying to find love and acceptance from her many relationships. As a man, I wince when reading these accounts. As a father of a daughter and as a fellow human being, I found myself hurting right along with her. Such is the power of Ellis Amburn’s writing.

Ellis’s detail as to how Janis functioned within Big Brother and the Holding Company as well as with Kosmic Blues is, by many accounts, as bang on as can reasonably be expected. Also painstakingly detailed was Joplin’s descent into alcohol and drug abuse. With the same attention to detail, Amburn puts together the last sad hours and minutes of Janis Joplin’s life.

Just like Hendrix before her and Morrison after, just as quick as it seemed that she blasted her way into the core of the rock world, she self-destructed , with it all coming down to her ashes being scattered along the California coast.

After reading “Pearl”, you feel that you’ve peered into the very mind and soul of Janis Joplin. You find yourself wishing that she could have found just one true friend in school that would have made her heart ache just a little bit less. You wish that the void in her soul would have been filled with something more fulfilling than the Southern Comfort and smack that she kept trying to fill it with. You wish that she could have experienced the love that she was obviously starving for.

If you’re a Janis Joplin fan, then “Pearl” is a must read. After reading it, you may be saddened but you won’t be disappointed.