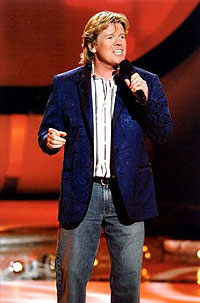 Okay. I’m REALLY going to embarrass myself by telling this story.

When I was in first or second grade, my family and I lived in a little trailer park in Huntsville, Alabama. My best buddy, Tim Z., and I were inseparable. We ran all over creation, playing and exploring all over and around the small trailer park.

During one day of high energy playing, my friend was singing the chorus – repeatedly – from a song I had never heard before. I asked him what he was singing and he told me it was I’m Henry The Eighth, I Am.

I knew it couldn’t be an Elvis Presley tune (since that’s all I ever cared to listen to at that time) so I asked him who sang it. He indicated that it was from a band his sister LOVED called Herman’s Hermits.

During this same time, I had a huge crush on my his sister, Debbie, but there was two very serious problems. First, she was every bit of sixteen to eighteen years old. I was six or seven. Just a little bit of an age difference. But, just supposin’ that this kind of true love transcended age differences, I now learned that I had an insurmountable mountain to climb.

She was in love with Peter Noone, teenage heart throb and lead singer for the smash 60’s band and the voice behind the Henry The Eighth! How, in the name of Elvis, was I going to compete with the likes of Peter?

Well, there was no way in the world that I was going to be able to compete with a teen idol like Noone so I threw in the towel, so to speak. I went on to many other crushes on many other girls that had crushes on other teen idols. Lucky for me, I married the girl of my dreams while she was between crushes on teen idols.

I was recently pleasantly surprised to learn that Mr. Noone was going to be appearing at one of Dallas’ fine venues. I heard about it and immediately thought: I wonder if he ever married Debbie Z? Then, thinking better of it, I wondered if I might secure an interview with this iconic singer from the sixties.

After some sleuthing, I did, indeed, secure an interview with the one and only Mr. Peter Noone. After setting aside any forty-some-odd year old grudges I might’ve still been harboring, I caught up with Peter to ask a few questions.

Since Noone had been a star since the age of 15, I was very curious as to what his fan base is made up of these days.

“I have always thought highly of fans. When I was young twelve year old follower of music, I saw the Everly brothers and they were very kind and gentleman like to their fans. Later, I was a fan of the Beatles and saw them be absolutely fabulous to all their fans, even the most obnoxious ones. All my heroes, as in Elvis and John Cash were likewise gentlemen!

“I decided if ever made it, I would always be nice to my followers. Of course there have been ups and downs in the quantity but I am not a judge of their quality. I have fans from 8 years old to about 63 and sometimes they bring their mums who have heard of me!”

With a career that spans from the 60’s thru today, I asked Peter what he thinks the biggest changes he’s witnessed in the music business.

“I think the biggest change has been the radio stations directing the choices of young buyers has gone. Since rock and roll began, there were always DJ’s who sort of directed public taste. But in the 80s, they were all bought out when the business guys and the people with the most money took over the charts.”

With the changes that he’s witnessed in the business as well as in the technological innovations, I asked Mr. Noone if he were 15 years old today, would he again pursue a music business career?

“I think a career in the music business is the best of all careers and I would do whatever it takes. We drove around in a van doing concerts. I still think that’s how it works: Action!”

For all of the Boomerocity readers that haven’t seen Peter Noone and Herman’s Hermits since the sixties, I asked Peter what they can expect to see in one of his shows today as compared to back in the day. His answer was jovial and to the point.

“All of my hits and lots of laughs . . . hopefully! I am better looking and taller now and I am also much wider!”

Herman’s Hermits had an incredible string of memorable hits such as Mr. Brown, You Have A Lovely Daughter, I’m Henry The Eighth, I Am and I’m Into Something Good that still enjoy plenty of air play and still stand quite well on their own today. I asked Noone why he thought that is and if any of today’s music stands up as well.
“I wrote great ‘whistleable’ songs and people can still whistle - even with dentures! I think that all music stands up from every period but mine is longer lasting.”

What’s Peter Noone listening to on his iPod these days that is commanding his attention? His brief answer will likely surprise you.

“I like a lot of country bands and most of the songs in the Hit Parade.”

Mr. Noone’s success hasn’t been limited to 60’s music. In the seventies, he worked on recordings with artists such as Debby Boone and David Bowie. During that same decade, he enjoyed leading roles in major theaters n the U.K. This led Peter to successful work on Broadway as well as in London in the 80’s.

In the early 90’s, Peter hosted VH1’s My Generation which enjoyed incredible ratings success. Because of fan and audience reaction to his TV and concert appearances, the channel voted Noone as VH1’s Viewers’ Choice Awards voted him as VH1’s Sexiest Artist.

Some guys have all the luck.

So, I had to ask one of my infamously obvious questions: What projects is he working on that his adoring fans can look forward to in the future?

Again, he answers with his signature British brevity by indicating that he’s coming out with a “new DVD and lots of telly and, sometime next year, a book.”

Now THAT’s a book I am looking forward to reading!

Are you interested in checking out more of what Peter Noone is up to? Do you want to find out how you can order a wide range of Peter’s CD’s? You may also want to know when his book is coming out. Well, you can get all of this by visiting Noone’s website, www.peternoone.com.

By the way, Mr. Noone is in the midst of an extensive tour, including right here in Dallas, May 1st at the Majestic Theater. There’s an excellent chance that this nostalgic tour is going to stop in or near a town close to you. Go to Peter’s website and check out his concert schedule and see when and where you can enjoy an evening great, memorable songs and humor.

Oh, and Debbie Z? Eat your heart out, girlfriend!