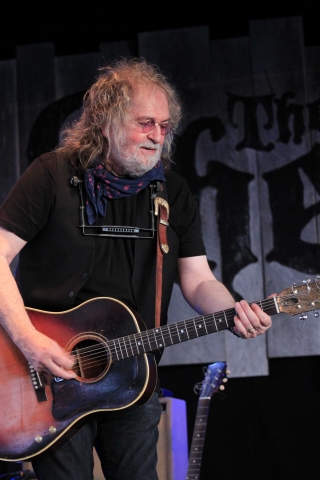 Photo by James Robert PattersonYou always expect good music at a concert, and with Ray Wylie Hubbard he is going to deliver. Ray not only delivers great music, but also some incredibly entertaining stories; and be prepared for the humorous one liners.

Performing at the "Shed" in Maryville, Tennessee,  Hubbard may be from Texas but you would think he was from East Tennessee with the Shed full of his followers and enthusiastic fans enjoying his engaging and lively show. Many of the songs had the fans singing right along with Hubbard, the Tennessee fans knew the words and they knew his music. Calling out to let him know which of his songs they wanted to hear, like Snake Farm, Mother Blues, Jazz Bo Danger, South of the River, Red Dress and the list of favorites went on and on. Hubbard was delighted to oblige obviously enjoying his own concert as much as his zealous admirers.

If you have never been to a Ray Wylie Hubbard concert then you need to line yourself up for his next event in your area.

Keep up with Ray and his ruffians at http://raywylie.com.