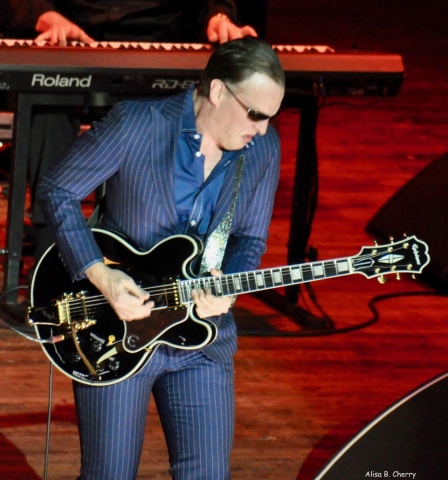 That is no exaggeration, folks.

And for those who have seen JB in concert knows that he never disappoints.

Last night’s show at Knoxville’s Civic Auditorium and Coliseum was the fifth time I’ve seen the blues great since I was turned on to him by a dear friend of mine a few years ago. As always, Joe blew the sellout crowd away and had them all eating out of his divinely talented hands and, as I said the last time he performed in Knoxville, he was fan-freakin’-tastic!

Another thing about a Bonamassa concert is that he likes to keep things fresh and unpredictable. In last night’s case, his setlist was a healthy mix of the tunes that fans have just got to hear (Sloe Gin, Woke Up Dreaming, Mountain Time, Never Make Your Move Too Soon, and How Many More Times) as well as a healthy dose of tunes from his more recent albums – especially Redemption and Blues of Desperation.

Photo by Alisa CherryAbout midway through the show, Joe introduced his tight and well-seasoned band and then let us all know that he is now a fellow Tennessean, having moved to the Nashville area since his last performance in Knoxville.
I’ll say it again, folks: If you’ve not heard Joe Bonamassa in any way, shape or form, look up some of his work on YouTube and then buy all the CDs and DVDs you can afford to get your hands on. Then, keep up with the latest on him by bookmarking his website, JBonamassa.com and sign up for his newsletter. Once you’re hooked, you’re hooked.