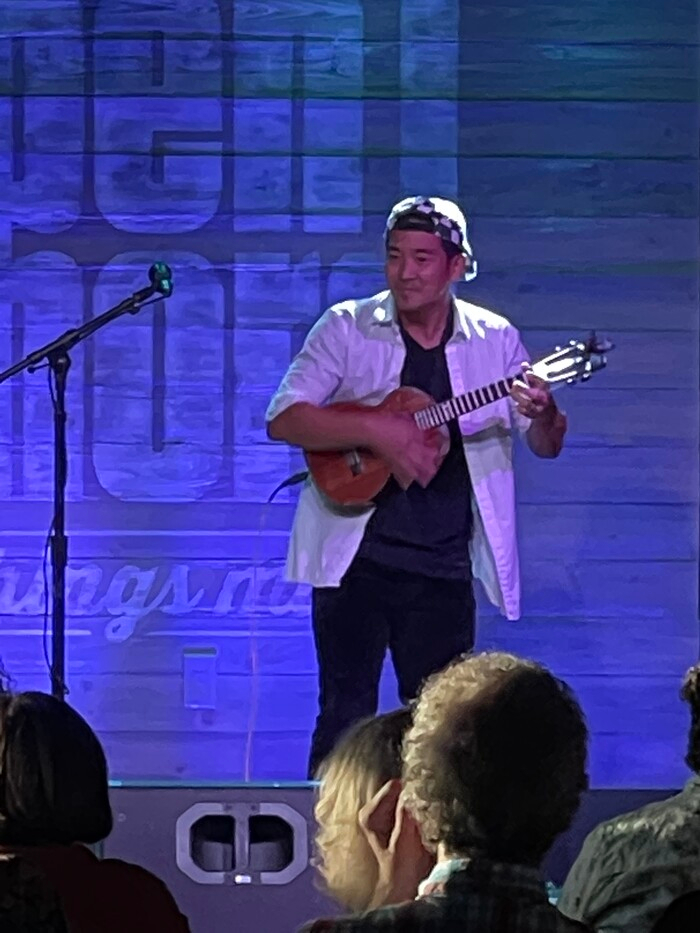 One of the two last concerts I saw before the pandemic shut everything down and the world changed was Jake Shimabukuro at the City Winery Nashville (read the review of it here). It is ironically fitting – if not poetic – that one of the first concerts I attended after the pandemic induced shutdown was lifted was to see Jake – this time, at Knoxville’s Open Chord.

The intimate atmosphere of the Open Chord was the perfect venue for Jake along with bassist, Nolan Verner, and Dave Preston on guitar during the second half of the show.

Shimabukuro was giddy with excitement to be able to play in front of live crowds again. I wasn’t closer enough to see but I wouldn’t be at all surprised to hear that he was teary-eyed at times as he chatted with the enthusiastic crowd.

As I said in my review of last year’s show, Jake is happy, and his happiness is contagious. So is his incredible body of music which he delivered to us with more happiness along with an overwhelming dose of gratitude – to be alive and playing to crowds again.

For those of you who think of Arthur Godfrey or Tiny Tim when it comes to ukulele performances, you’re woefully way off base. To say that Jake rocks a ukulele would be a gross understatement but it’s the best one I can come up with after much thought.

Whether playing his own songs such as “Dragon”, “Red Crystal”, or “Summer Rain” or covering tunes such as “Bohemian Rhapsody”, his Beatles medley, or “While My Guitar Gently Weeps”, Jake was applauded like the ukulele rock star that he is. He fed off the crowd and we fed off him.

During the show, it finally dawned on me who Jake reminded me of on stage: the Australian thunder from Down Under, Tommy Emmanuel. There’s footage of them performing together from as far back as fourteen years ago. I’d pay good money to attend a concert with those two sharing the stage. Just sayin’.

Folks, I’ve said it before to my friends and I’ll say it to you: You need to listen to (and buy) Jakes music (I suggest his last CD, “Trio”, for starters). Then, you need to start following him on his website to see when and where he will be performing near you. Finally, you need to buy tickets and go.

It will be money well spent and you’ll have an amazing time.