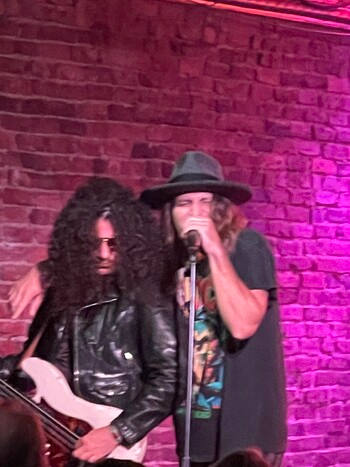 If you’ve been following Boomerocity for even just a couple of months, then you already know that I’m already a big Dirty Honey fan from my interview with them in April of this year (here) and my review of their first release in February last year.

I told y’all back then that these guys are hot and going places. How right I was! The announcement came out last month that they were opening for the Black Crowes this summer.

How cool is that?!

I’m such a fan of these guys that I drove an hour and a half to Johnson City, Tennessee, on a school night to see them. It was worth the three-hour round trip on the 2+ hours on my feet during the opening act, Joyous Wolf, and Dirty Honey.

I don’t always comment on opening acts, but I will when it comes to Joyous Wolf.

I was pleasantly surprised and impressed with this California band. Consisting of vocalist Nick Reese, guitarist Blake Allard, bassist Greg Braccio, and drummer Robert Sodaro, these guys are high energy, musically tight, fresh rock and roll. I was especially impressed with Reese’s ability to do flips on the small stage they were on. Check them out at JoyousWolf.com.

Dirty Honey hit the stage right on time and did so – not with a bang, but a rock and roll nuclear explosion. They not only met expectations, but they also exceeded them. The crowd was exuberate and ready to be rocked by the band so they welcomed the musical nuclear fallout.

I’m amazed at the loyal fan base Dirty Honey has already cultivated. Among the capacity, standing room only crowd was a gentleman who drove all the way from Wisconsin to see the band. I know that this is often done for major acts. However, for this to be happening for a band who is at the beginning of their trajectory to stardom, it bodes well for Dirty Honey.

As I said a moment ago, Dirty Honey exceeded the crowd’s expectations. Marc LaBelle is this generations Robert Plant and Chris Robinson all wrapped into one. John Notto was absolutely incredible on guitar. Corey Coverstone provided the percussional foundation that is usually only seen from drummers several years his senior. And Justin Smolian? He’s the Slash of bass players – both in looks and in delivery.

The band served up their growing catalog of songs in their signature tight, explosively energetic way. Though the venue (Capone’s, Johnson City, Tennessee) is relatively small (I’m guessing a capacity of about 200 standing people), Dirty Honey performed as if they were blowing away a sell-out crowd at Madison Square Garden – which I firmly believe they will do some day in the not-too-distant future.

Trust me: You’ll definitely want to start following Dirty Honey. Follow them at their website, DirtyHoney.com as well as on their social media pages. If you can’t see them as a headlining act, then you must cheer them on at one of the Black Crowes tour stops.

When you do, you’re going to be hooked for life.