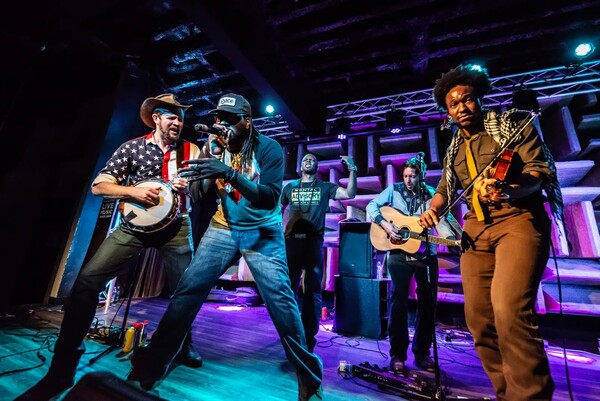 When I reviewed the Gangstagrass show at Knoxville’s Bijou Theatre six months ago, I wrote, “Folks, I don’t think this will be so much a concert review as it is social commentary. Why? Because what I witnessed last night was social and racial 4h – real, true social and racial harmony - in action.”

For last night’s Gangstagrass show at Maryville, Tennessee’s The Shed Smokehouse & Juke Joint (co-located with Smoky Mountain Harley-Davidson), I would have to say this:

Why do I say that?

Well, there are two types of Harley fans: Those who own one and those who want one. The difference is economics (affordability), and both ends of the economic spectrum were well represented at last night’s show.

Thus, the crowd at last night’s Gangstagrass show. Though, I must say that the crowd was decidedly whiter than the much more racially mixed crowd six months ago, the enthusiasm level for Gangstagrass and their music was sky-high.

As I’ve noted in past posts, I’m neither much of a rap or bluegrass fan. But I am a Gangstagrass fan and much of what it represents. I also greatly admire their incredible talent. It’s top shelf with each member excellent in their own way.

As they were six months ago, Gangstagrass was incredibly slick, tight, professional, and engaging . . . unlike the opening act, Tejon Street Corner Thieves (more about that in a moment). As a non-rap/non-bluegrass fan, I consider Gangstagrass amazing because they consistently reel me in and make me a bigger fan of them and their work. They take their work – and the message of their music – quite seriously. Because of that, I never feel that I’ve wasted my time listening to them or seeing them perform. Judging by the reaction of last night's crowd, they enthusiastically felt the same way.

I make this prediction (and it’s not a hard one to make): Gangstagrass will become much more widely known – a major act, even. They will reach those heights if they continue with their meaningful, socially relevant band with a true, partisan-agnostic, and relevant message. A message that is truly socio-economically thought-provoking and thought-changing.

I will preface my remarks about Tejon Street Corner Thieves by reminding you that my “wheelhouse” isn’t in the genre of bluegrass. I have a huge appreciation for it, but it does not take up much space in my music library nor very many minutes of my music listening time. That said, you’re more than welcome to take my comments about the opening act with the smallest of grains of salt.

Instrumentally, the standup bass player for Tejon Street Corner Thieves is quite good. By comparison, her bandmates were strummers of the banjo and guitar. The band obviously has their fans and they do have a record deal and they were brought in from Colorado, so somebody thought enough of them to book ‘em. I just didn’t like them. It could’ve been they constantly wanted the crowd to yell, “Hell ya!” or it could’ve been because the banjo player kept asking, “Are you in’ drunk, yet?”

I’ll just chalk it up to my lack of knowledge of the bluegrass genre so don’t let my opinion keep you from checking them out. I know what I don’t know.

But I do know this: Gangstagrass is awesomely entertaining and thought-provoking. If you’ve not caught one of their shows, do. They’re worth the investment of your time and money.