Americana Music: Voices, Visionaries, and Pioneers of an Honest Sound 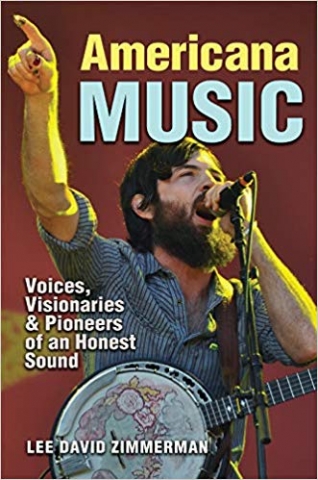 Full disclosure: Lee Zimmerman and his wife, Alisa, are close, dear friends of mine. We met three or four years ago during a meeting at a gathering of local blues enthusiasts and have been close friends ever since.

Lee and I meet regularly for lunch and meet up at shows from time to time. We share stories and contacts within the music industry and give each other advice on writing. Again, he’s amongst the best in the business and I’m honored to have him as a friend.

With all of that, I couldn’t be prouder of Lee and his maiden voyage as a book author. I call him Captain Americana because he’s THE go-to guy on everything about the genre.

With roots in Appalachia, the Mississippi Delta, New Orleans, the Piedmont, Memphis, and the prairies of Texas and the American West, the musical genre called Americana can prove difficult to define. Nevertheless, this burgeoning trend in American popular music continues to expand and develop, winning new audiences and engendering fresh, innovative artists at an exponential rate.

As Lee illustrates in Americana Music: Voices, Visionaries, and Pioneers of an Honest Sound, “Americana” covers a gamut of sounds and styles. In its strictest sense, it is a blanket term for bluegrass, country, mountain music, rockabilly, and the blues. By a broader definition, it can encompass roots rock, country rock, singer/songwriters, R&B, and their various combinations. Bob Dylan, Hank Williams, Carl Perkins, and Tom Petty can all lay valid claims as purveyors of Americana, but so can Elvis Costello, Solomon Burke, and Jason Isbell. Americana is new and old, classic and contemporary, trendy and traditional.

Mining the firsthand insights of those whose stories help shape the sound—people such as Ralph Stanley, John McEuen (Nitty Gritty Dirt Band), Chris Hillman (Byrds, Flying Burrito Brothers), Paul Cotton and Rusty Young (Poco), Shawn Colvin, Kinky Friedman, David Bromberg, the Avett Brothers, Amanda Shires, Ruthie Foster, and many more—Americana Music provides a history of how Americana originated, how it reached a broader audience in the ’60s and ’70s with the merging of rock and country, and how it evolved its overwhelmingly populist appeal as it entered the new millennium.