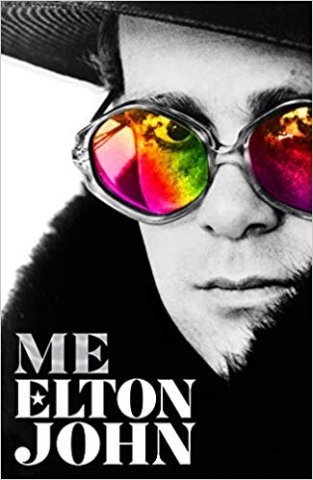 It was the summer of 1974. I was fourteen years old. I was spending the summer in East Tennessee, away from my home in Glendale, Arizona. It had been a tumultuous year and the summer was filled with hauling hay and running the country roads with anyone I could hang with who had a driver’s license.

Sure, I had heard Elton John before but, with the distractions I was experiencing, I didn’t pay close attention to his work.

Then the air waves started to be flooded with the beautifully written and recorded, “Don’t Let the Sun Go Down on Me”. I became a nearly obsessed fan of Elton’s. Throughout the rest of my high school years, he and Alice Cooper were my dominant musical idols whom I kept up with then and since.

I was delighted when Alice came out with his autobiography, “Alice Cooper, Golf Monster” in 2007. The gaps of his story were filled in when his manager, Shep Gordon, released his autobiography, “They Call me Supermensch: A Backstage Pass to the Amazing Worlds of Film, Food, and Rock ‘n’ Roll”. Reading them filled me in on much of what I didn’t know as a fan. The only thing missing was a tome by Sir Elton John. So, I waited.

My wait is over, and the wait was worth it.

When I received my advanced review copy from the good folks at Henry Holt and Co. (both print and audio versions), I was ecstatic and couldn’t put them down – yes, both the print and the audio versions.

Regardless of the version you choose to acquire and devour, you’ll find that Elton is as he always has been: blunt, unabashedly honest and forthright, articulate, and hysterically funny, at times. Even when his words are being read by Taron Egerton (who, of course, played Elton in the hit movie, “Rocketman”), the depth of the words and the flavor of the stories being told are such that you feel that you’re actually there, reliving Elton’s life from early childhood right up until today. In short: he reveals the thing behind the bling.

I’m not going to spill the juicy beans as to what is in the book. You’ll be robbing yourself of a great read/listen if you don’t get your own copy to enjoy. What I will say is that the book is vastly different than “Rocketman” in that the movie is a theatrical/musical presentation of Elton’s story squished into two hours. Despite Egerton’s presence on the audio book, “Me” is much more, well, autobiographical, and a lot less “Broadway”.

If you’re looking for a watered down, whitewashed, G-rated version of Elton’s life, um, how shall I say this? Um, well, you’ll get the unvarnished Elton. Let me just put it to you that way. Sometimes eloquent. Sometimes raw. Always entertaining and informative.

While some of Elton’s story is tough and will go against the grain of what we think or how we view life, his transparency is refreshing and enlightening as to how we can understand someone when we learn where they’ve been and how they got to where they are today.

Me: Elton John is an excellent addition to any fan or music lover’s library.