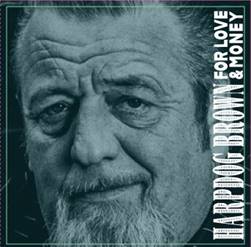 Recorded at The Warehouse Studio in Vancouver, For Love & Money is a striking showcase of Brown’s talent and versatility as a singer and harmonica player throughout the 13 tracks. A mix of originals and well-crafted covers, Brown takes the listener on an aural road trip through his interpretations of the historical sounds of classic American blues and jazz, with a vintage sound, new classics, modern material and a killer new band.

When asked about Harpdog’s new material, producer Steve Dawson remarked, “This is totally unique material. Where he’s drawing from is this era of ‘40s and ‘50s jump blues mixed with some Chicago meets NOLA and the harp stuff is reminiscent of ‘50s Sonny Boy-era blues…you can’t really put your finger on it. And then the horn aspect of it is totally unique. I can’t really think of another band to compare that to. For Love & Money is less guitar driven than Brown’s previous releases, and is heavier on piano and horns, keeping with the NOLA vibe.”

A larger than life character, Harpdog Brown (his legal name) recently discovered that he has familial New Orleans roots and, feels deeply connected to the New Orleans blues sound and the historical importance of the music. He has been dubbed a “Blues Evangelist” - taking his messages and songs to audiences across North America and beyond for nearly four decades. “I speak the blues like it's the truth, and it is,” he was recently quoted. “I do feel like I'm a servant of the people. A missionary if you will. Music can heal people if they pay attention to the messages in these songs.”

Joining Brown on the album is a varied cast of some of the finest musicians on the circuit today. The new direction of the band is an inspiring one with a new, younger generation of musicians joining in on the journey with William Joseph Abbott on the clarinet and alto sax and Skye Lambourne on trombone. The seasoned musicians on the album include Dave Webb on piano & Hammond B3, Robert (Bob) Vail Grant on drums, Jerry Cook on baritone and tenor sax, Jeremy Holmes on bass, and special guest Steve Dawson on guitars.

As Harpdog states, “This is one damn fine album, depicting where I am in my life and musical career. The title, For Love & Money, sums it all up well. After all, that’s what it’s all about. And in that order. We should all know that money is useless without love.”