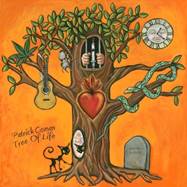 Label: For the Sake of the Song

Roots-based singer/songwriter Patrick Coman announces a February 23 release date for his new CD, Tree of Life, on his For the Sake of the Song label imprint. Produced by acclaimed guitarist Peter Parcek and drummer Marco Giovino (Robert Plant, Buddy Miller), who both also play on the new disc, Tree of Life was recorded at Dagotown Recorders in Holden, Mass., and features 11 original songs penned by Coman, plus a cool cover of Leon Russell’s “Magic Mirror.”

A long-time Boston musician and radio personality before recently locating to Charlottesville, Virginia, Coman was very familiar with both Peter Parcek and Marco Giovino. “Getting to play with Peter over the past few years has been like going to school,” states Coman. “From him I’ve learned so much about playing the blues, but perhaps more importantly I’ve learned what it means to be a working musician and a bandleader and to create music with power, substance and integrity.

“Even though a lot of the songs are pretty heavy, we had so much fun during the recording process. Marco has this great studio out in rural Massachusetts that feels like a little clubhouse or what you’d imagine The Band had in mind with Big Pink. It was a place where we felt comfortable letting our imaginations run wild and really creating a sonic landscape for each song. No idea was too crazy for us to try and I think that type of freedom gave us the ambition to strive for something great.”

Nearly all of the material on the new CD was written in the months leading up to and directly following the birth of Coman’s first child. With a new baby in the house, songs were pieced together late at night or early in the morning in that mystical twilight period where dreams and reality blur. This cosmic bridge is reflected in the album’s title and sequence, where haunting opener “Heartbeat” beckons the listener into this eerie dreamlike landscape, before galloping across a fun house mirror version of Americana that reflects back in ways that seem both familiar and strange. It’s clear that Patrick Coman’s Tree of Life has many musical branches.

“The ‘Tree of Life’ comes up in most religions around the world, often as a bridge between heaven and earth or between life and death,” says Coman. “In the last few months before my daughter was born I began to think about her time in the womb in the same way and how this symbol echoed my own transition between my previous life and the one I knew I would step into on the day she was born.”

Coman’s musical foundation was formed at an early age from his upbringing in Oklahoma. “Like many Oklahomans, I grew up revering Woody Guthrie and his affinity for the working class,” he recalls. “Today it is eerie to see how his Dust Bowl-era themes are just as relevant as ever. Although my sound is different, I like to think that Woody would appreciate songs like ‘Trouble #2’ and ‘The Judge.’ He was the master of boiling down an injustice to the point where anyone could understand it and while it doesn’t get mentioned as much, his combination of folk, blues, and hillbilly music paved the way for those of us who work in the cracks between genres.”

In an era where volume dictates attention, Patrick Coman pulls his audience in with a quiet, unshakable confidence. It’s a confidence built from a decade behind the scenes with some of the generation’s best songwriters as a booking agent, sound engineer, and DJ/producer for premier Americana station WUMB-FM in Boston, before stepping into the spotlight with his debut full- length album, Tree of Life.

Turning his back on a career in the music business to spend his time as a stay-at-home father by day and full-time musician by night has paid dividends for Coman as a writer and performer. Over the past year he’s opened for a crop of revered Americana artists like Del McCoury, Robbie Fulks, Larry Campbell & Teresa Williams, Joan Osborne and John Fullbright, while veteran musicians like Parcek and Giovino have taken him under their wing.

“Being a songwriter means grappling with your inner demons in an incredibly public way,” Coman summarizes. “That’s something that I have always been afraid of and so I’ve often avoided writing about myself. One amazing thing about being a parent is that it forces you to be honest with yourself. Digging into my fears and doubts in songs like ‘Keep My Soul,’ ‘Tree of Life’ or even ‘Heartbeat’ was painful at the time, but now when I perform them it feels so cathartic to share those emotions with other people and I’m always amazed because those tend to be the favorite songs when people come up after the show.”