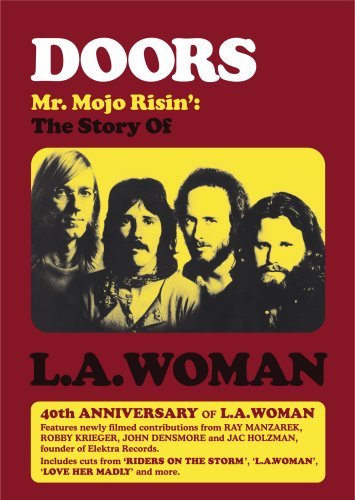 Mr. Mojo Risin’: The Story of L.A. Woman is a wonderful documentary of the making of what turned out to be The Doors’ swan song: the album, L.A. Woman. The back story to this iconic, historic album was made with the full cooperation, involvement and approval of The Doors.

Mr. Mojo Risin’ is told by way of brand new interviews with Ray Manzarek, Robby Krieger and John Densmore. There are also interviews with the band’s original manger, Bill Siddons, and Elektra Records founder, Jac Holzman and the album’s engineer/producer, Bruce Botnick and a ton of other people tied to the band or the record at that time.

For geeks like me who love to hear how a song comes together, you’ll hear the guys share how the hits that the album generated came about. It’s always amazing how landmark sounds came about as almost an afterthought or fluke. Live and studio performances and a boat load of great, rare archival photos make this DVD a real treat for Doors fans.

I’m a sucker for discoveries of long, lost stuff and this DVD sucks me right in with the previously unreleased blues tune, She Smells So Nice. The vocal track is a little on the scratchy side but that’s what adds to its appeal, as far as I’m concerned. Morrison sounds like he’s having a blast with the song. It would’ve been great if Jim and the boys had also cut an entire blues album before his untimely death.

The documentary also reminded me of something that I had forgotten and that was Elvis Presley's bass player, Jerry Scheff, did the bass work on this album. I'm sure Mr. Scheff will shed some light about this project from his perspective when his autobiography comes out in March. Stay tuned.

Regarding Morrison’s passing, the guys do discuss the subject in a frank way that still seems to reveal the feeling that they still can’t believe he’s gone. Conspiracy theorists who feel that Morrison didn’t really die in 1971 will not see any hits of a smoking gun in this movie that will support their theory. Nor is there any discussion about the theory that the Lizard King murdered for whatever reason. I would’ve been surprised and disappointed if the subjects were discussed

I got the sense from watching this documentary that the guys still have a love for Morrison as well as for each other that only a tight band of brothers can have. It’s great hearing these guys share their stories and insights into this landmark album as well as the life inside – and dynamic of – the mind.

The production quality of Mr. Mojo Risin’ is excellent. The editing and flow is crisp and clean. The selection of material is bang-on. Like all great movies and documentaries, it leaves you wanting more. Sadly, after this DVD (with the exception of She Smells So Nice) , it’s highly unlikely that there is any more.

Avid Doors fans as well as rock music historians will want to have this DVD in their personal collection and will watch many, many times.

Mr. Mojo Risin’: The Story of L.A. Woman is available in standard DVD and Blu-Ray formats.

Rich Robinson In Flux
6319 views
Posted December, 2016 Photo by Alysse GafkjenIn the fall of 1990, I was driving from Raleigh, North...