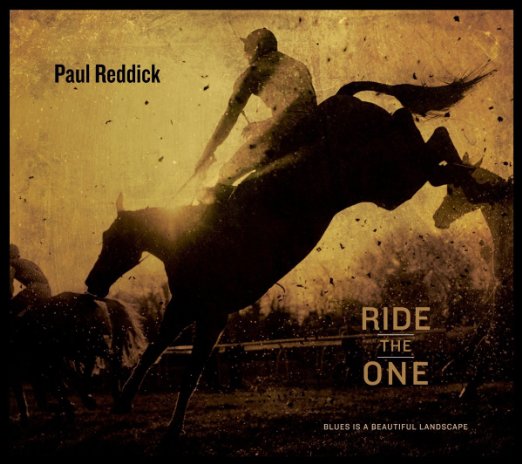 Paul Reddick’s debut CD, Ride the One, on his new label, Stony Plain Records, is now out and just flippin’ amazing!

Ride the One is a musical reference to the hypnotic grooves explored on Paul Reddick's new release. Deep rhythm, intense singing and harp playing combine with his distinctive blues poetry. As Reddick puts it, “Blues is a beautiful landscape;” and he’s created this special atmospheric video to talk about his vision of the music: https://vimeo.com/92108801.

Reddick’s songs on Ride the One have a palpable sense of urgency, passion, energy and grit that transcend any usual categorizations of the blues. Its traditional blues themes of love, death and redemption are bonded by the crucible of rock-edged performances that clearly demonstrate why the idiom birthed the emergence of rock ‘n’ roll and other forms of roots music.

For over 25 years, Paul Reddick has been melding poetry, mystery, darkness and light along with an extensive knowledge of the history and traditions of blues. An unofficial poet laureate of Canadian blues, Mojo Magazine praised his “wayward brilliance” in an earlier review. Reddick’s song, “I'm A Criminal,” was used by Coca-Cola in a TV commercial that aired during the Super Bowl.

“Ensuring the long-term health of blues in Canada has become a passion for Paul Reddick, and the motivation behind his creation of the Cobalt Prize, aimed at celebrating songwriting innovation within the form,” wrote Canadian music site FYI Music News in interview with the musician.

“The singer/harmonica player has never forgotten he was once in that position when he formed The Sidemen in 1990, a band whose skillful balance of tradition and originality laid the foundation for a new crop of homegrown talent,” added the site.

One of those bands that picked up the torch was MonkeyJunk, who returned the favor of Reddick’s influence on them with member Steve Marriner’s participation on Ride the One, Reddick’s fourth solo album.

According to Reddick, his desire to sponsor the Cobalt Prize was “to encourage people to write blues songs – songs that expand, explore and refresh the blues tradition, to broaden the possibilities, assumptions and expectations and audience for the blues,” said Reddick in the interview. “In a lot of ways, Bob Dylan has always been a master at that, and if there were one song I wish I could have written, it would probably be ‘Knockin’ on Heaven’s Door’.”

Paul Reddick, Ride The One