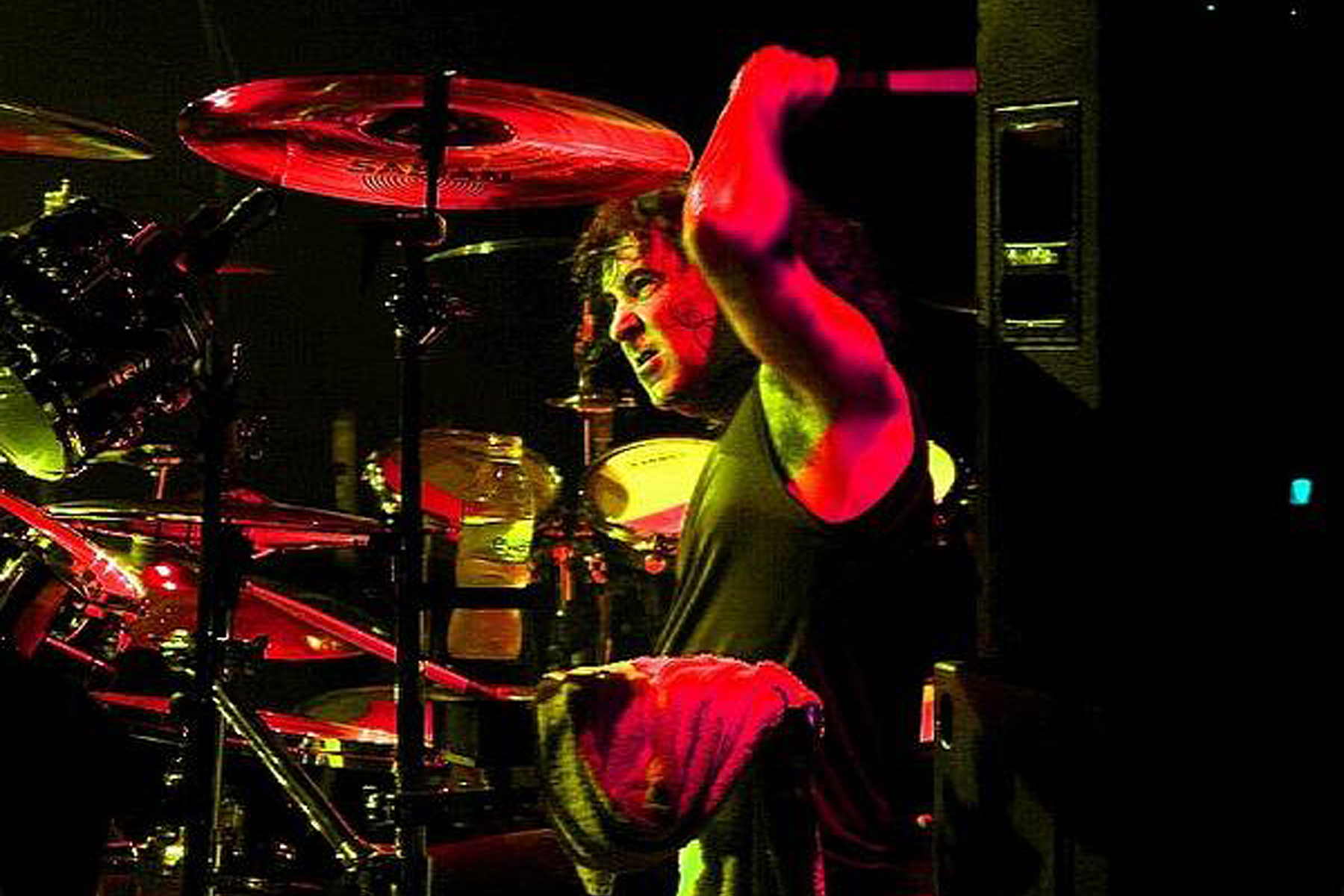 On May 16, 2010, the heavy metal world lost one of the most respected – if not iconic – vocalists/songwriters of its genre: Ronnie James Dio.  Since losing his valiant fight with stomach cancer, Dio have been honored and revered not only because of the tremendous musical legacy that has survived him but also due in large part to the tenacity with which his loving wife, Wendy, has guarded and promoted her late husband’s memory.

One such effort currently being managed by Mrs. Dio-Gimenez (Wendy re-married on September 9th of this year) is Dio Disciples – a tribute band formed to honor and perpetuate the memory and talents of the late metal icon.  The band is made of former Dio band mates,  Oni Logan and Tim "Ripper" Owens on vocals, Scott Warren on keyboards, Craig Goldy on guitar, bassist Bjorn Anglund, and Simon Wright on drums.

I had the distinct pleasure of chatting with Simon Wright by phone during the band’s Portland, Oregon, stop of their current tour.  As we settled into the interview, I asked Wright how the tour was going so far.

“So far, so good! The fans are seeming to enjoy it. We just started off. We played the Anaheim House of Blues two days ago. Last night we were in Seattle and San Luis Obispo before that. It’s going good. People seem to like it!”

Naturally, I was curious how this round of touring is different from the previous round of Dio Disciple touring so I asked Simon for his perspective on it.

“Yeah, we took a little bit of time off in the middle there because certain members had previous commitments to do other things. Sometimes it’s difficult to get everybody together but we managed to pull everybody together for this leg of the tour.

“But, yeah, this leg is a little bit different because of the fact  that there’s a been a Dio release called The Very Beast Of Dio, Volume 2 and we’ve taken a couple of songs off of that release. It’s like a retrospect of the years from ’96 thru 2000 and takes in the albums Angry Machines, Master of the Moon, Magica, and Killing the Dragon. So, on this tour we decided to take some cuts off of that album and we’ve added those to the set as well as playing the classic songs of Ronnie’s like Heaven and Hell¸ We Rock¸ and Holy Diver. So that’s one difference.

“Also, we have a new singer – Oni Logan from Lynch Mob because our other singer had production commitments in England. I think he produced the last Saxon album. He told us earlier in the year that he was going to be doing that so we managed to pull everybody together. So, yeah, it’s going well so far. It seems to be going down quite well, really. Oni’s doing a really great job. So is Tim. Both knew Ronnie at one point or another. Again, it seems to be going well so far. The fans seem to like what they’re doing.”

All of this begs the question: How are the crowds reacting to Dio Disciples as compared to when you toured with Ronnie?

Like others who worked with Ronnie, Simon has his own perspective of the late rocker so I asked him what do he thinks is behind the mystique and appeal behind the memory of Dio.

“Well, first and foremost, I think it’s his songs. They’re just timeless songs! Some of his songs recreated the whole outlook of the heavy metal scene. There were albums that he was on and went into bands and totally changed the outlook on heavy metal songs and how other people approached songs because they were so groundbreaking.

“But besides his voice and his great songwriting I think people who got to know him and got to meet him will attest that he was just a remarkable person. If you met him he really brought you in and made you feel special on any occasion. He had this way of doing that. I think that he’ll be remembered for that, too. Such a gentleman. He really loved his fans. I think that is one thing that will always be remembered about him is he was such a great guy.”

With such warm memories of Ronnie, I asked Simon what was the most misunderstood thing about Dio – if anything.

“I’m not sure. I’m not sure. I understand the question. I just don’t think there was anything, really, that could be misunderstood about him. He was the genuine article. Like I say, I’m sure everybody will attest to it. If you got to meet him he would be the same person. He was a pretty consistent kind of guy. He could be a tough boss but there always have to be a boss in charge of something, whether it is in construction or whatever. He really kept control of things. He had a really great vision of the road ahead. But he was the genuine article. He didn’t really veer from who he actually was. He was just a great guy.”

I asked Wright if he had a favorite story about Ronnie James Dio. The story he shared caught me completely off guard and animal lovers around the world will love what Simon shares about the metal man.

“Oh, I have lots!  There’s one that comes to mind and it’s a little weird. It’s not really music related. We were on tour in Russia. It was amazing because we were the first band there – well, we weren’t but they made us feel like that with the fan’s reactions and stuff. People were going crazy. We were flying and landed at an airport – I forget exactly where in Russia – but we were out there for about a month. We were surrounded – we all were – by press, TV and fans. We’re walking out of the airport and he (Dio) stopped and he went back to the bar and got these glasses of milk. We’re going, ‘What the hell are you doing?’ And he came back out and he’s giving the milk to these cats that were just disheveled. That’s just another side to him. He loved animals. It was just a great thing that he did. It didn’t seem like a really ‘cool’ thing to do at that time but he did it anyway. He was like, ‘Somebody feed these frickin’ cats!’ and he went out there and brought them milk! It was a beautiful thing.”

One can’t adequately talk of Ronnie James Dio without mentioning the deeply intense love that was shared between him and his lovely and devoted wife, Wendy.  I asked Simon if he has much interaction with her.

“I think we’ve become a lot closer because of what we all went through with Ronnie. She’s our manager, too, so we’re still a family. We all love Wendy. She does a fantastic job – especially with Ronnie’s cancer fund. We have a show coming up in Hollywood – not to sound like I’m plugging the hell out of anything but it’s quite an important show – at the Avalon on Halloween, which is a gala event. All of the proceeds go to Ronnie’s Stand Up And Shout Cancer Fund. So, yeah, we’re constantly in touch.”

Shifting the focus of our discussion more specifically to Wright and his career, I mentioned to him that I know that he’s played with some of the greatest metal talent on the planet.  I was curious if there anyone in any genre of music that he wants to work with whom he hasn’t already played.

“Oh, wow, there are so many. Jimmy Page comes to mind. Eddie Van Halen. Those guys are just unbelievable! If I ever got so lucky, yeah, that would be a nice thing to do! And I’m sure that I’m not the only one who wants to work with them! Ha! Ha! Those two come to mind but there are lots of brilliant musicians out there who I would love to work with.”

Aside from your work with Dio Disciples, what else is on your radar, work wise, in the next 12 months? Five years?

“Oh, I couldn’t look as far ahead as five years. I just couldn’t do that. Before we started this tour I recorded an album with this Italian band – friends of mine – which is pretty cool. It’s kind of back to three chord rock. That’s coming out next year. I may do a couple of shows with them over in Italy. But, at this moment, no, I’m really concentrating on Dio Disciples at the moment. But you never know. I keep my eyes and ears open for something going on.”

“That’s a good question. You know what? I don’t even think about it. I just do this because I know I’ve got to do it. We all feel the same way in this band. It’s like we were all family with Ronnie. But I just hope that that some people will remember me. I learned a lot from Ronnie. I try to apply that to a lot of things that I do because it was a lot of good stuff. As far as being remembered, yeah, I hope I get remembered but I don’t really think about that very much. I just keep doing what I’m doing. It’s important to keep doing this, I think.”

Keep Up With The Latest on Dio Disciples at RonnieJamesDio.Com