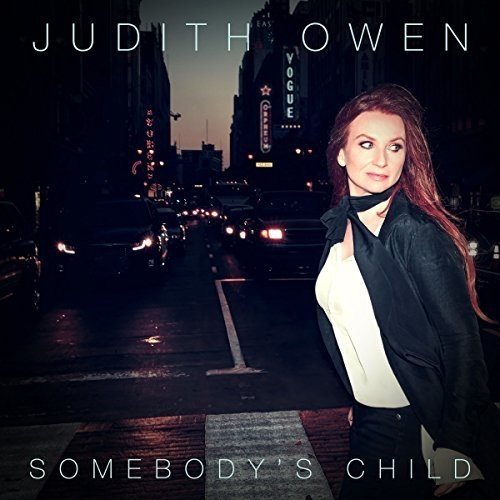 That should be ‘nuff said about Judith Owen’s new CD, Somebody’s Child, because, after listening to it, I fell in love with this woman’s voice and style. Smooth. Mood-altering. Anxiety-calming. All in all, Owen is absolutely heart-movingly amazing!

And, just a little side note: She’s quite happily married to Harry Shearer of The Simpsons and Spinal Tap. How’s that for additional cool factor?

That said, I’ll go ahead and share with you what has been shared with me about this amazing pianist/singer/songwriter.

Pianist-singer-songwriter Judith Owen will release the US/Canada version of her 11th solo album ‘Somebody's Child’, which was called “near perfection” by Paste magazine and was named in the 2016 "Top 100 Records of the Year" (The Sunday Times Culture UK). Judith will join Bryan Ferry on his North American tour March 9 to April 3. Her band features the legendary Leland Sklar (bass), Gabriella Swallow (cello), and Pedro Segundo (percussion).

Known for her love of musical variety and melding it into a great stylistic gumbo all her own. ‘Somebody’s Child’ is the culmination of this mix: voice and piano front and center, songs that are vignettes of life crafted from the perspective that we ARE all “somebody’s child” - parental as well as planetary. An album about us.

“By nature, I am a diverse musician. It’s who I am because of all the music I grew up being exposed to, from opera to Sinatra, Joni to Stevie Wonder, and everything in between,” says Judith.

Whereas 2014’s critically-acclaimed ‘Ebb & Flow’ was personal and very much a love letter to Laurel Canyon, ‘Somebody’s Child’ takes a leap from the confessional to the observational, whilst recruiting the same crème de la crème of Los Angeles session musicians – the aforementioned bassist, Leland Sklar, guitarist Waddy Wachtel and drummer Russell Kunkel - and incorporating them with her British-based musicians - master percussionist Pedro Segundo and sublime cellist Gabriella Swallow - to create a fresh new dynamic.

“It's a very British thing where you love mixing all those styles. It's classical. It's pop. There's jazz. There's rhythm and blues. Then there's rock thrown in there too.”

Recording with Kunkel, Sklar and Wachtel, studio stalwarts behind Carole King, Joni Mitchell, Jackson Browne, Laura Nyro among others, and touring with them “served as this incredible calling card for me. I waited a long time to be able to work with some of my musical idols.  I’m a late bloomer,” she admits.

With ‘Somebody's Child’, and its many moods and shades and a contemporary twist, Judith Owen seems well on her way into the elite of contemporary singer-songwriters and interpreters. Which is where she belongs.