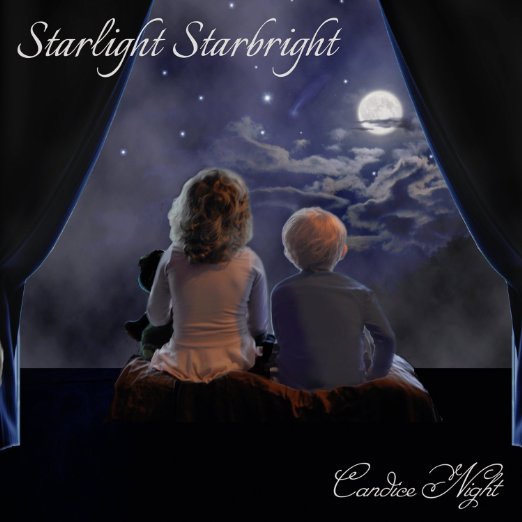 Often drawing comparisons to Stevie Nicks and Karen Carpenter, Candice Night is a modern day siren, evoking mesmerizing, celestial sensibilities, topped with her ethereal, hypnotic vocals. These qualities perfectly resonate within the 13 tracks of the dream-like Starlight Starbright -- an album designed to ease her children to a calming sleep. However, this album is more than a collection of lullabies. Candice crafted these songs to sweep the listener away to a place of peace and relaxation. In fact, Candice was informed that these songs had a calming affect on children dealing with sensory issues, hyperactivity, and learning disabilities at several schools.

Inspired by her children -- daughter Autumn (5) and son Rory (3) -- Starlight Starbright is composed of both originals (some co-written and performed with her husband and Blackmore’s Night partner Ritchie Blackmore) and classics, such as a rendition of John Denver’s “Annie’s Song,” a Disney favorite “So This Is Love” (from 1950’s Cinderella), and the timeless lullaby “Rock A Bye Baby.” A particularly personal inclusion is ”Lullaby In The Night”, written by Autumn when she was just 1 ½ years old. In fact, the booklet included in Starlight Starbright includes four stories written by Autumn (who has clearly inherited her parents’ creativity). Additionally, the Japanese version of the album includes special paintings inspired by these stories from famed illustrator Hide Hayashi.

Candice Night originally started conceiving Starlight Starbright when she was pregnant with Autumn. “I really felt just so completely full of love and part of this bigger picture, this miracle,” she enthuses. “I wanted to sing to celebrate this incredible life that was occurring inside of me. I’ve never felt so spiritual.”

As a bonus, the Starlight Starbright CD also features music videos for “Lullaby In The Night” and “Once In A Garden.” Starring Autumn and Rory, and capturing the innocence, security, and unbridled wonder of childhood, these videos crystallize the themes of Starlight Starbright, evoking imagery of fairy tales and children at play.

Steve Lukather Talks About TOTO XIV
11621 views
March, 2015 If you’re a music aficionado at all, you’ve heard of Toto and are familiar with their m...