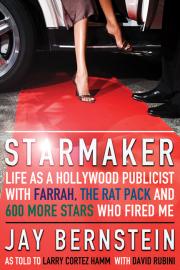 Say the word, “Hollywood”, and all sorts of images are conjured up. For baby boomers like me, a line from the theme from “The Beverly Hillbillies” comes to mind: “Californy is the place you ought to be . . . swimmin’ pools, movie stars . . .”

Starmaker: Life As A Hollywood Publicist With Farrah, The Rat Pack and 600 More Stars Who Fired Me is an autobiography of the late, great PR guru to the stars, Jay Bernstein. The tome sheds some light into the machinery used to make the sausage called stardom.

Everyone seems to have the “right” view of Hollywood. Journalists, managers, preachers, fans all have their perspective. To that point, Larry Cortez Hamm, co-writer of Starmaker, quotes Bernstein’s perspective about those perspectives in the afterword of that book:

“Let’s say we take an Australian aborigine to Africa to see his first elephant. Before we show him the elephant, however, we blindfold him. Then we put him behind the elephant and take the mask off. All he sees is a big ******* and a tail. Then we put the blindfold back on the aborigine, take him away and ship him home. He doesn’t know anything about elephant tusks, trunks and ears, but back among his kin he is nevertheless the resident expert on elephants. Well, the world is replete with the aboriginal elephant experts, particularly when it comes to the Hollywood jungle.”

Jay Bernstein’s story definitely gives the reader a view of every aspect of the Hollywood elephant – warts, poop and all. This excellent insider’s tale is full of lines that would fit in a Mike Hammer episode (“The network had more one-shot amateurs than a high school senior play.”). That could because Mr. Bernstein was responsible for bringing Hammer and the great actor, Stacy Keach, to the TV screen.

The 600+ list of stars that Jay was involved with reads like a who’s who of the TV and silver screens. Sinatra. Davis, Jr. Fawcett. Mansfield. Savalas. Hamilton. Berle. Somers. Spielberg. The list goes on and on and on as do the stories associated with many of them.

A tell-all wouldn’t be a tell-all without there being plenty of poop to dish out on the Hollywood Walk of Fame and the star-making machinery behind it. There’s the story of Frank Sinatra’s alleged horrible treatment of Sammy Davis, Jr. Then there’s the one about the heavy come-on by Jayne Mansfield. The petty but heavy-handed politics that make and break – not only a person’s career but their lives like some innocent sport.

Sadly, the writing of the book came to an abrupt end with Mr. Bernstein succumbing to a stroke with Farrah Fawcett by his side in 2006. And, in a twist that can only originate in Hollywood, Larry Hamm, passed away while the book was being finished. The book was left in the more than capable hands of David Rubini to complete and get to press.

If you like insider stories about Hollywood and it’s stars, then you will love Starmaker. You may as well pick up a couple of extra copies for Christmas gifts because there are, no doubt, others in your life who will also thoroughly enjoy the book.