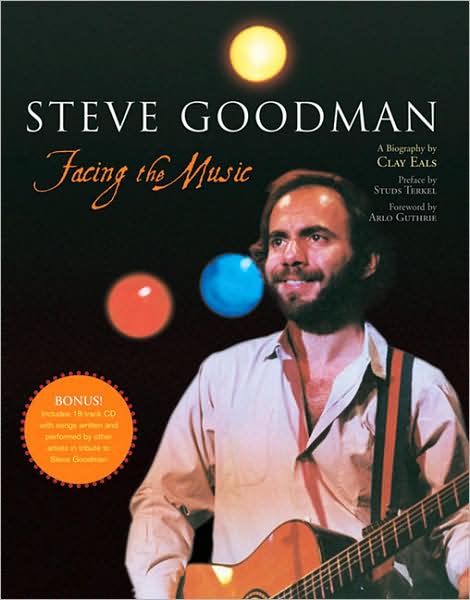 My first exposure to Steve Goodman’s music was while I was a teenager in the seventies. I would often stay up at night to watch Geraldo Rivera’s old TV show, Good Night, America. The show’s theme was a phrase from the iconic hit by Arlo Guthrie, City of New Orleans. I didn’t know it at the time, but the song was written by Steve.

Goodman was a prolific song writer and performer whose success largely came from others performing his songs. Sadly, his career was cut tragically short after succumbing to leukemia in 1984 at the tender age of just 36.

Steve Goodman: Facing The Music by Clay Eals is an incredible, well documented biography of this gifted songwriter and performer. From cover to cover, the book is 778 pages long (counting all of the footnotes, documentation and exhibits as well as a mind-boggling 575 photographs. The volume even includes a CD of eighteen songs that were written and performed by artists as a tribute to Goodman and his impact on them.

Eals has done an outstanding job chronicling Goodman’s life. He interviewed over one thousand artists, actors, authors and even a politician. Among those interviewed are Steve Martin, Jackson Browne, Jimmy Buffet, Martin Mull and Hillary Rodham Clinton, to name very few.

The Preface was written by none other than the late Studs Terkel and the Foreword was provided by folk artist, Arlo Guthrie. This is all followed by nineteen chapters of funny, enlightening, sad, and informative information about this effervescent artist who made such an impact on his friends, family and the country.

An example of this is a quote from Hillary Rodham Clinton who was a high school classmate with Goodman:

“Steve was somebody who you always wanted to be on your side because he would lead, like a pied piper, through the aisles. . . . . He kept people entertained and made politics more entertaining.”

The most amazing thing shared in this book is how Goodman handled his illness and impending death. For Baby Boomers who are on the south side of the life span spectrum, the stories provided in this book are inspiring and instructional.

Steve Goodman: Facing The Music has been out since 2007 and is still in print. Pick up a copy for your summer reading.