Stories + Road Dogs + In The Palace Of The King (Re-Releases) 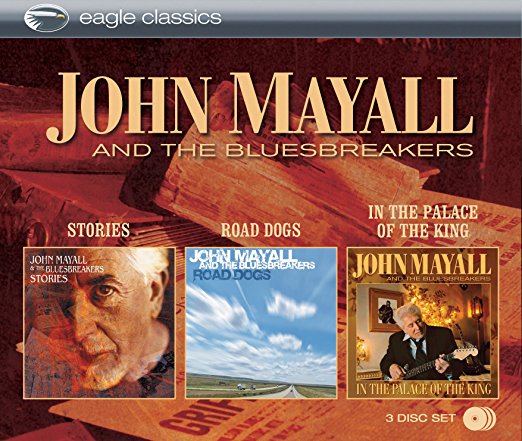 Blues lovers, your CD library dreams are about to come true. Eagle Rock Entertainment will re-issue in a single set (and for the first time ever) three of John Mayall & The Bluesbreakers’ albums. As part of the new Eagle Classics series, Stories, Road Dogs, and In The Palace Of The King is being released as a 3CD set and what a treasure trove of great blues it is!

One can’t think of John Mayall without, a) thinking of the incredible catalog of blues this man has as his legacy and, b) the storied number of people who have paid their dues playing with him. Greats such as Eric Clapton, Walter Trout, Mick Taylor, Peter Green, Randy Resnick, Harvey Mandel and many, many others. With that in mind, whenever Mayall releases (or re-releases, as is this case) a disc, it is worthy of immediate attention.

Stories + Road Dogs + In The Palace Of The King features such classics as Dirty Water, Kids Got The Blues, Road Dogs, Awestruck & Spellbound, Palace Of The King, Going Down, and Living On The Highway. Stories, released in 2002, is a mix of original songs and classics. Road Dogs, released in 2005, features fifteen original songs written by Mayall & The Bluesbreakers. Finally, 2007’s In The Palace Of The King is a stunning tribute to the late, great Freddie King. And one of the three discs would be worth the price paid to get all three.

It is quite an undertaking for any musician to release three albums within the course of one decade. This trifecta of blues greatness proves that John Mayall & The Bluesbreakers are a formidable force of blues music and master musicianship. These three albums are a necessary addition to any blues fan’s collection.