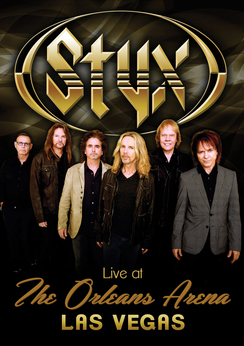 Filmed in high definition, Styx: Live At The Orleans Arena captures the band performing in July 2014, showering the crowd with a set list of hits and fan favorites: “Too Much Time On My Hands,” “Fooling Yourself (The Angry Young Man),” “Renegade,” and more. Originally released on CD in June 2015, this incredible live concert will now be available on DVD and Blu-ray.

"Damn, we had a good time on that tour!” says vocalist/guitarist Tommy Shaw. “Night after night following Don Felder's legendary set, we couldn't wait to hit the stage for our turn at bat. Unforgettable."

Formed in Chicago in 1972, Styx played a key role in defining the AOR genre, and established themselves as one of America’s greatest rock bands. Their blend of soaring melodies, hard rock guitar, musical theatricality, and prog-rock elements earned them millions of global record sales and numerous platinum and multi-platinum albums. Styx: Live At The Orleans Arena proves exactly how they earned that legacy.

To heighten the live Styx experience, Live At The Orleans Arena is punctuated with band / crew member interviews, detailing life on the road. Bonus features include the entire concert sans the interview footage, bonus interview footage, and a photo gallery.

This is definitely a must-have DVD for not only Styx fans but also classic rock aficionados.