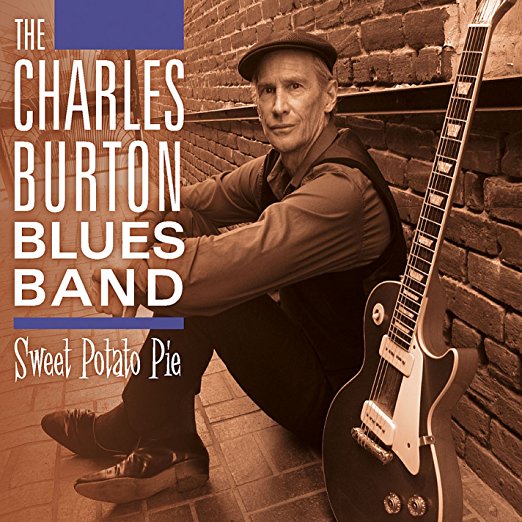 The blues. If Boomerocity doesn’t like anything else, musically, it DOES love the blues! So, when a new CD from The Charlie Burton Blues Band hit’s this humble writer’s desk, I know that I’m in for a great time. When Burton’s latest, Sweet Potato Pie, was delivered to me, I wasn’t disappointed.

Sweet Potato Pie is a thirteen song treasure chest of Charles Burton original tunes – some of which have been in the making for years and just now made available on disc. This project definitely shows what the L.A. born blues man is capable of with songs that bely his depth and breadth of musicianship, songwriting skills and international experience.

While each and every song is brilliantly written, performed and produced, I’ll focus on three randomly selected tunes:

By far the Boomerocity favorite from Sweet Potato Pie is the seventh cut on the disc, Livin’ Without You (Blues for Simon). This song seems to make your heart bleed as you listen to it. Burton shared the back story on the tune, “This is a very sad song, musically, although I feel it has hope in it, too. The first European tour I put together on my own was in 2009. I had bought this van which has had breakdowns of one sort or another every year (and, to top it off, was stolen this year).

“Well, on the way from Karlstad, Sweden to Oslo, Norway, the van broke down just as we crossed into Norway (where everything is more expensive). So we pulled into this ‘Rust Check’ place, where we thought some form of mechanic might be able to look at the problem. The owner was Magnus Soli, Jr., who was very downcast, having lost his son. When we told him we were blues musicians, he got this gleam in his eye, and he ended up lending us a van to use for four days – which really saved the tour. He mentioned that maybe I could write a blues song for his son, Simon. This is that song.”

Such is the stuff of great blues tunes.

Goin’ To Memphis is a song that Burton wrote in 2008 when he was asked to play at the 2009 International Blues Challenge (IBC) by Blues Lovers United of San Diego. Smooth in a great southern way, this tune is worthy of multiple slaps of the repeat button.

Finally, New Boogie is a great jam showcases the chops of each member of the band via an almost ZZ Top kind of groove. It’s a lot of fun and definitely gets a lot of play on the Boomerocity juke box.

The other ten cuts are great, as well, so you’re not going be gypped in the slightest but picking up Sweet Potato Pie. In fact, you’re going to find that it’s music money very well spent.

Snowy White - Boomerocity Finally Has Something On Him
Michele Rundgren